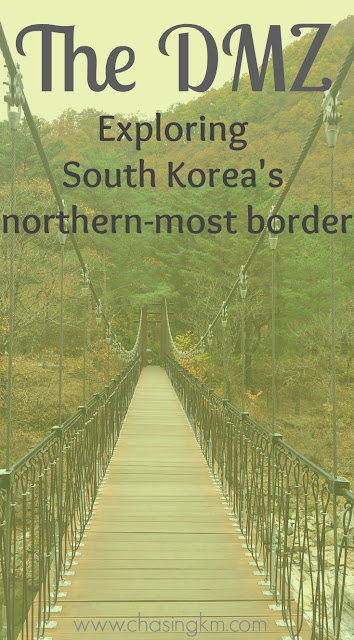 The rest of the world knows very little about South Korea other than the fact that they have super fast internet and are technically still at war with North Korea.

This war leads to sporadic missile tests by their childlike leader and the odd foray into the demilitarized zone, otherwise known as the DMZ, by North Korean soldiers. This is a zone that stretches from the west coast to the east coast. It is 4 km wide and 250 km long. Lined on both sides with electric fences, tank traps, landmines and waiting armies. It serves as a barrier between the communist North and the democratic South. Also lining each border, here’s the strange part, are observatories where the public can visit.
At these observatory points you can try and peer through the fences and across 4 km of mountains and valleys and on a clear day catch a glimpse of the dreaded enemy territory! If this doesn’t work they have cameras with telescopic lenses set up all over. Inside the building at Eulji Observatory Post, we were lucky enough to get a short talk by a Korean soldier in English. He explained all about the DMZ and what it entails, took us through all the camera views, zoomed in on North Korean outposts, farm lands and mountain peaks and told us a few tales about the happenings of the DMZ. I don’t want to ruin the experience and tell you everything, but there are tales involving naked ladies… 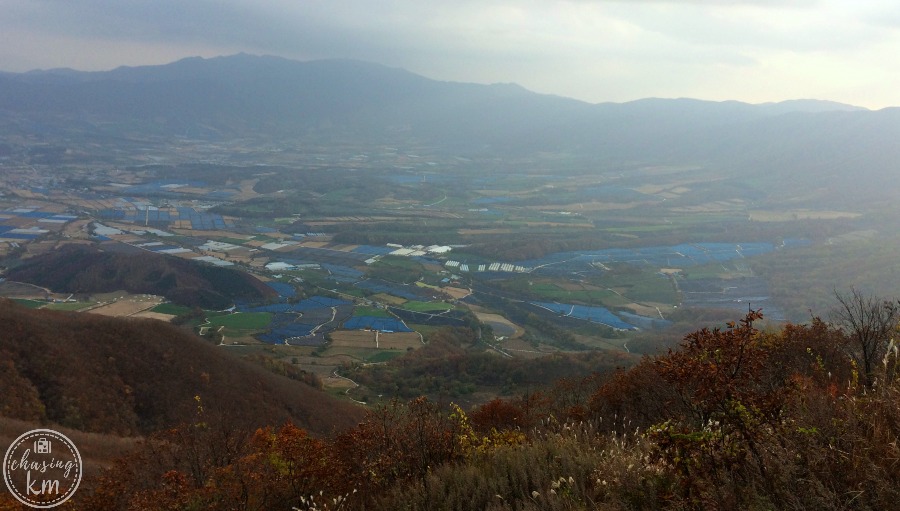 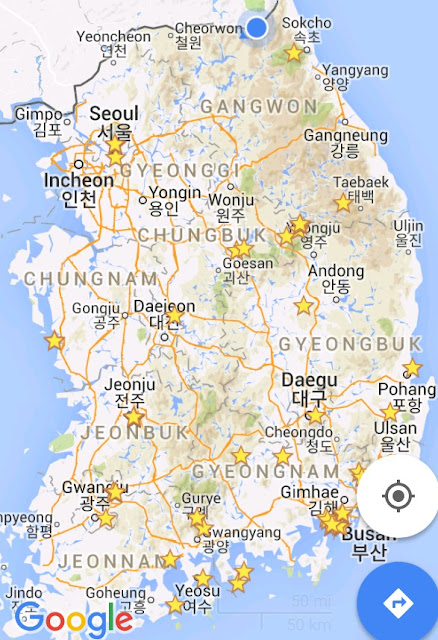 Conditions at the observation points are pretty strict, no photos allowed, armed soldiers everywhere, buses get searched before they get to approach. They even ask you to turn off the location services on your phone in case you get tracked by the enemy! Before we did this, we quickly opened our maps and took a screenshot of how far north we were!
After visiting the actual observation point we went down to view an infiltration tunnel dug by North Korea. This was the 4th infiltration tunnel discovered by the south, and was quite a sight to see. You get to the tunnel by walking down a spacious tunnel drilled with some impressive equipment that the South Koreans used to intercept the the North Korean tunnel. Once you get to the interception point you get to go on a fun ride on an electric train for a short trip into and back out of the NK tunnel. It is at this point that you realize the stark difference between North and South resources. Having just walked down a tunnel you could very easily swing a couple of cats in, you get to a small tunnel, barely high enough for most people to walk hunched in. Apparently the average height of the NK male is 1.6m. The walls show the marks of picks and some holes drilled for dynamite. They must have taken ages to get as far as they did. Once South Korea got wind of their tunnel, they drilled through and intercepted it in short order.
The other thing that really stood out when we visited this site was the “information” video we had to watch before being allowed into the tunnel. This turned out to be nothing more than a tirade on how evil and disingenuous the North are, constantly trying to infiltrate and take over the South. Quite a laugh actually. We realised how propaganda plays a part everywhere, not only in the North where we are told it happens so severely.
We also made a short visit to an area just outside the DMZ called Dutayeon that had for many years been off limits to the public. Here they had a few interactive experiences and displays. At these displays, you can hear what gunfire and mines sound like and see some of the gear that was used during the war. The area itself was quite beautiful with a river running through the valley, a waterfall and of course the fall foliage on display. Photo opportunities for days. 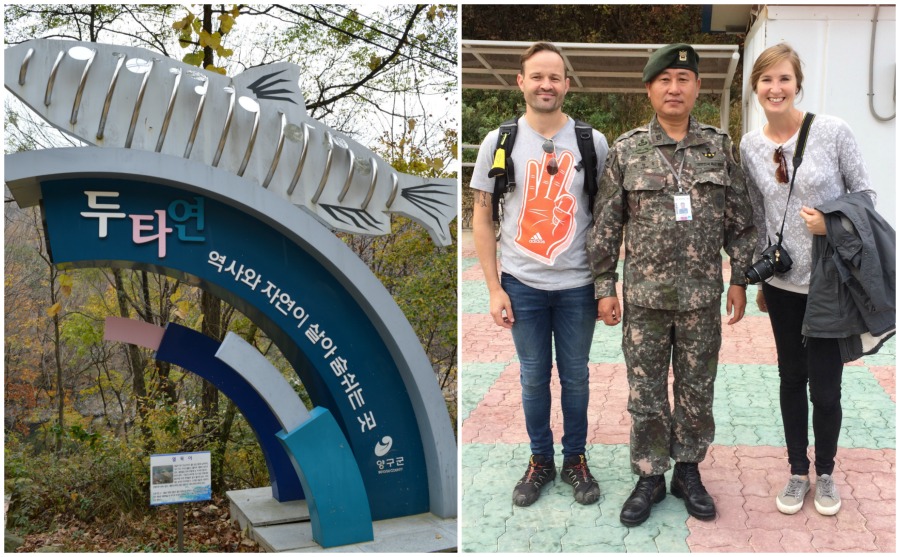 Something exciting about the seasons! Dutayeon, near the border of South Korea has only been open to the public for the last 10 years so is largely “undisturbed”. Such a beautiful place at a beautiful time of the year 🍁🍂 #fall #changingcolours #dmz #waterfall #naturelover #naturalbeauty
A photo posted by Kayley Chislett (@kayleykay7) on Oct 23, 2016 at 5:41am PDT

Forever, and ever, you’ll stay in my heart and I will love you 🎤 Just some Korean random signage at Dutayeon near the demilitarized zone #dmz #fall #changingcolours #forever #chasingkm
A photo posted by Kayley Chislett (@kayleykay7) on Oct 22, 2016 at 8:15am PDT

Some natural beauties on display. No filter needed 🙂 #dmz #chasingkm
A photo posted by Mark Scrooby (@thelazyfisherman) on Oct 22, 2016 at 4:53am PDT

We did this whole day as part of a group tour with Enjoy Korea and it was well worth it. We spent the Saturday traveling up north to the DMZ and the Sunday at Seoraksan National Park. The tour included all transportation and accommodation as well as entrance fees  and registration at all attractions. Everything was planned out and arrangements were made prior to our arrival. We just had to arrive on time. Although we usually prefer to travel on our own and make our own arrangements, Korea has very little of their tourism  geared towards English speakers, so the language barrier can be an issue. We have never been disappointed on an Enjoy Korea trip.

How do you prefer to travel? Group tours or your own way?