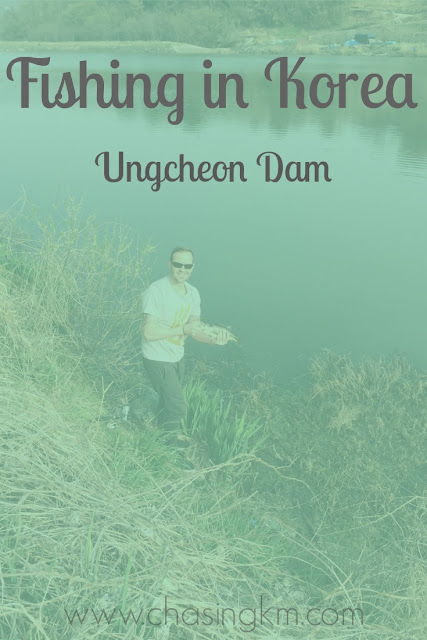 This dam in Ungcheon  (서중서류지) was the first dam I fished in Korea and I was lucky enough to catch a bass on my first outing there. This obviously meant I went back there as often as I could! It was also very easily accessible by bus from where I live with a bus stop right next to the dam.

How to get there

From Yongwon or Jinhae the 315, 305 or 757 will all stop at the dam or within walking distance. I had first spotted the dam as it was on my regular bus route and as the weather warmed up I started seeing fisherman on the banks. A quick scouting trip to the dam confirmed that they were fishing for bass and my next stop was a tackle shop to get some gear.

This dam in Ungcheon is surrounded by farms and mountains so is quite beautiful at times. It also has loads of cherry blossom trees along one edge and both sides of the road leading up to it. If the crowds in Jinhae get too much this is a great area for a picnic and some cherry blossom viewing.

I’ve seen a few carp in the Ungcheon dam as well as bass and blue gill. This dam is used for irrigation of the surrounding farms so water levels can fluctuate dramatically. I have had very mixed luck here and spent many fishing sessions catching  absolutely nothing. I have however picked up quite a few bass there ranging from 10 to about 30cm. The bluegill also reach a fairly decent size and I have caught loads on fly fishing gear as well as a few bigger ones on bass worms.

There are usually a few Filipinos and Thai fishermen at this dam who fish for bluegill. They cook and eat them right there or sometimes take them home. If you catch anything they will ask you if they can have it. I don’t usually see any reason not to give them what I have caught as I don’t eat bass or bluegill and they are both species that were artificially introduced to South Korea as a food source.

I also happened to meet a few local bass fishermen at this dam and have since become quite good friends with one of them and he has taken me on lots of fishing expeditions and introduced me to some new dams to fish at!

The area is littered with irrigation dams and reservoirs and it is worth taking the time to explore them all. You might get lucky and find one that holds some bass. 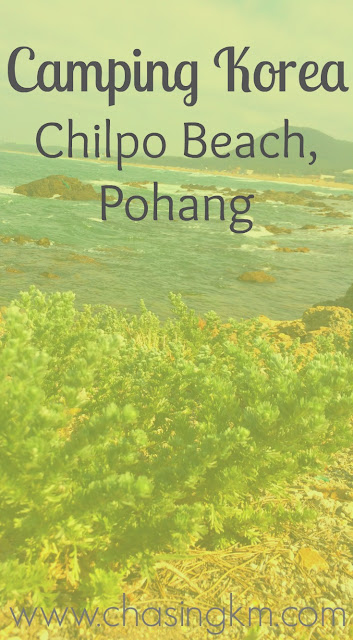 A long weekend in June, thanks to Memorial Day gave us the perfect time to do some beach camping! A little bit of research and a reluctance to spend too many hours in traffic led us to Pohang. A slightly obscure blog post mentioned a secluded beach, next door to Pohang’s main beach Chilpo, where camping was possible away from the crowds. Kayley’s navigation and investigation skills eventually led us there. Initially it didn’t look too promising as the roads went through a very industrial area that wasn’t too inviting. It did, however, lead to a small fishing village with a lovely little beach that we ended up staying on for 2 nights/3days. At first, we had just headed straight into the village and spotted some cars that were parked very close to where we wanted to camp but there were no roads from the village. We backtracked a bit and found an access road right down to the beach. Guerilla camping heaven.

A few Korean families were set up well back from the beach on a grassy area, so we proceeded to set up right on the beach near a few small cliffs that provided a nice shelter from the wind, some privacy and a handy “camping loo”. We set up our tent, did a bit of beach clean up and collected some firewood. There was also lots of ocean debris around that we ended up using to make a lounge area and outdoor kitchen around our camp fire. We ended up having a very comfortable set up. 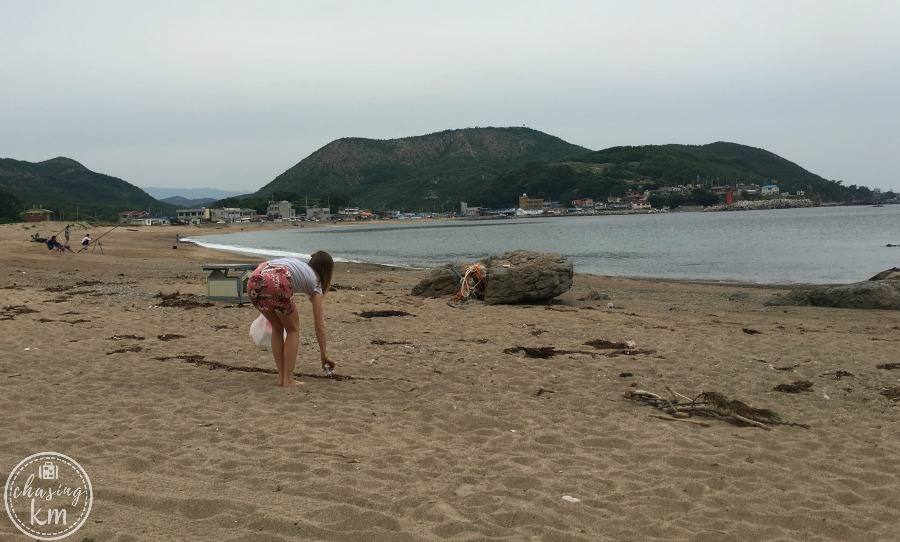 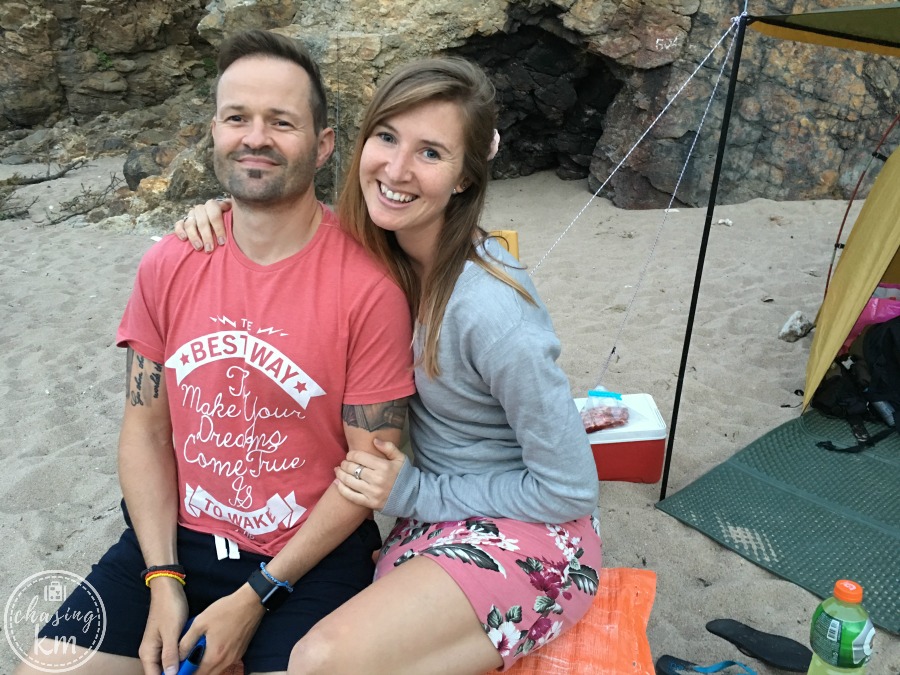 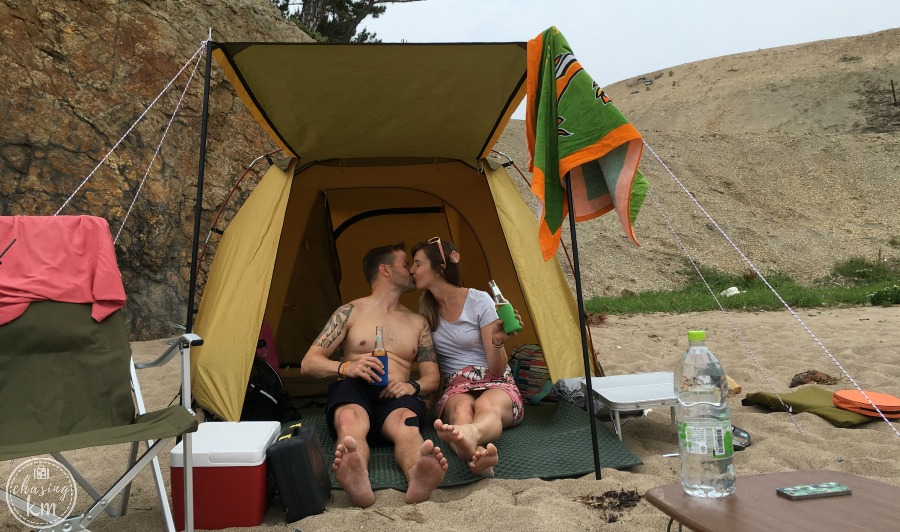 When we arrived, the weather wasn’t the best, but it was pleasant enough to be beach camping and we even got some sun on Sunday (with a bit of wind). We woke up on Monday morning to a beautiful sunrise and the rain held off until Monday afternoon while we were packing up. We spent the days lounging around enjoying the outdoors, reading, fishing and learning some Gaelic football moves. I also did a bit of fishing off the rocks and managed to catch a few strange looking fish. We had a big bonfire each night, as well as our delicious samgyupsal (pork belly) and lamb chops dinners. We spent the evenings sitting around the fire swapping stories with our friends John and Neeta. Fortunately firewood was plentiful. 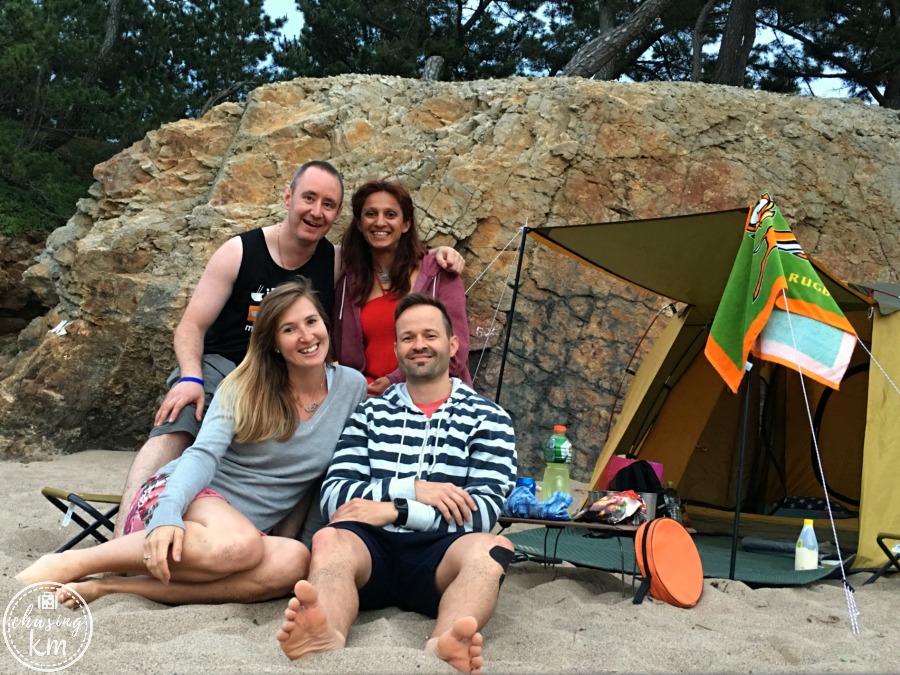 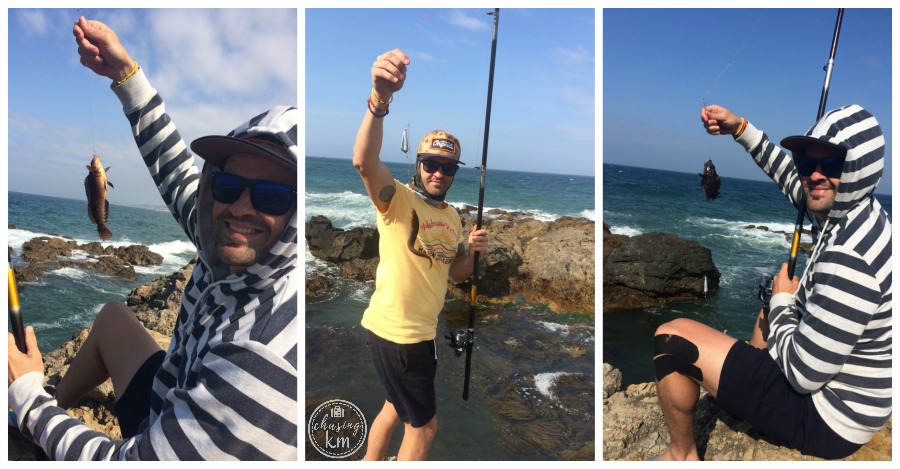 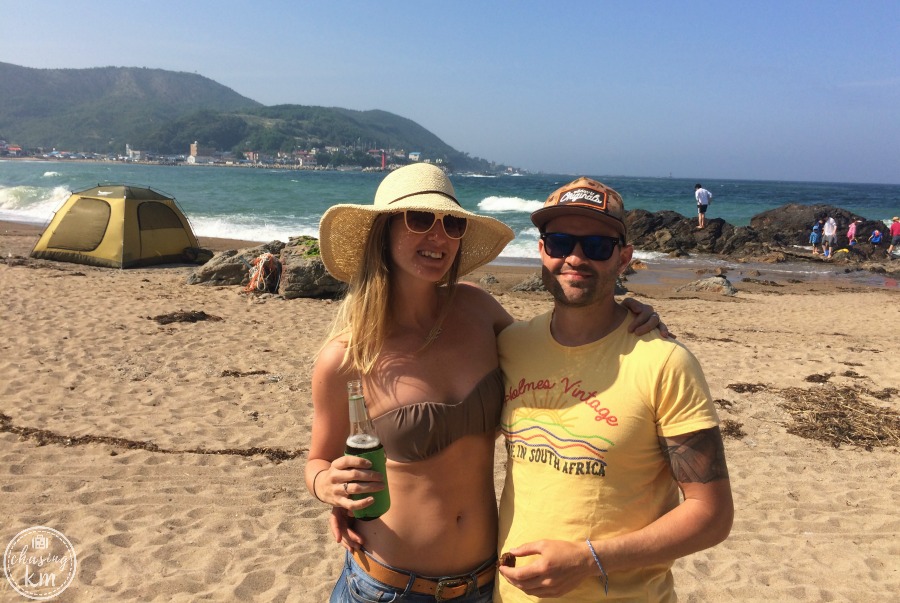 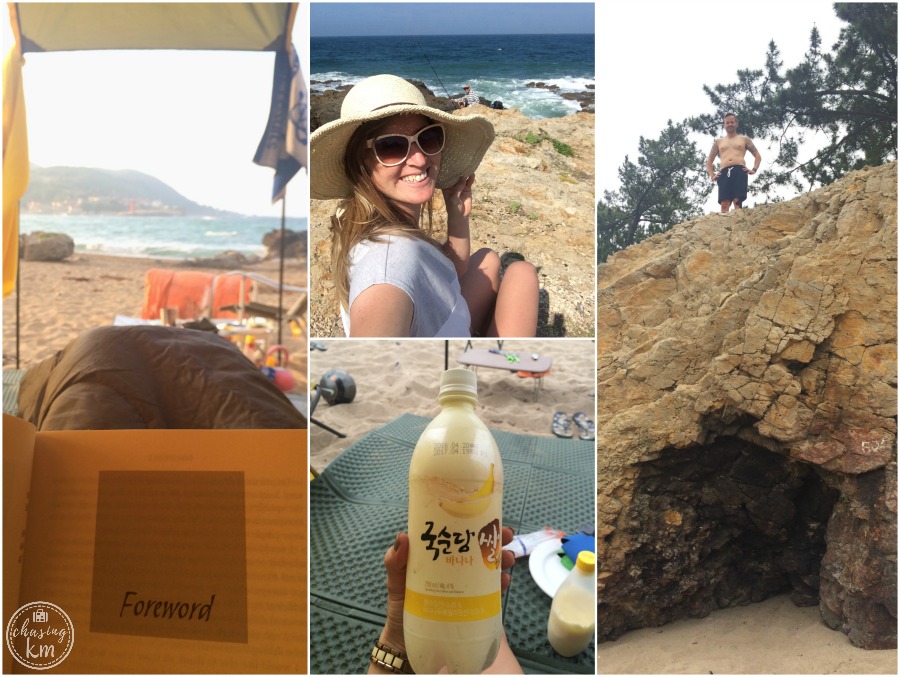 The main beach (Chilpo-Ri) was very close to where we camped and there was a small shop for ice/beer/water etc as well as large public bathrooms if you were really desperate. The ocean was cold but good enough for a quick rinse if you felt the need. The beach was soft sand. It was really very picturesque with the little fishing village and harbour in the distance.
The Sunday evening was a lot busier and quite a few Korean families set up  to do some beach camping, but it never got crowded. The entertainment for the evening was a Korean man who had probably had a few too many drinks and tried to show off to his friends by driving along the beach. He proceeded to get stuck in the very soft sand and it took an hour, two other off-road vehicles and a four-wheeler to eventually get him off the beach.

After packing up, Kayley and I took the “scenic” route back home. We meandered along the coast line up to the Homigot (Hand of Harmony). Pohang is very well know for this giant hand statue in the ocean that apparently sees the first sunrise of the  Korean New Year. If you time it right, you can snap a picture of the sun resting in the hand. Of course this means there are hordes of people trying to capture the perfect selfie and making weird poses (we did the same…) Lots of small Korean restaurants in the area to grab a bite. There are also a few coffee shops if you’re looking for something a bit more western. The drive along the coastal road is a bit tedious and time-consuming though! 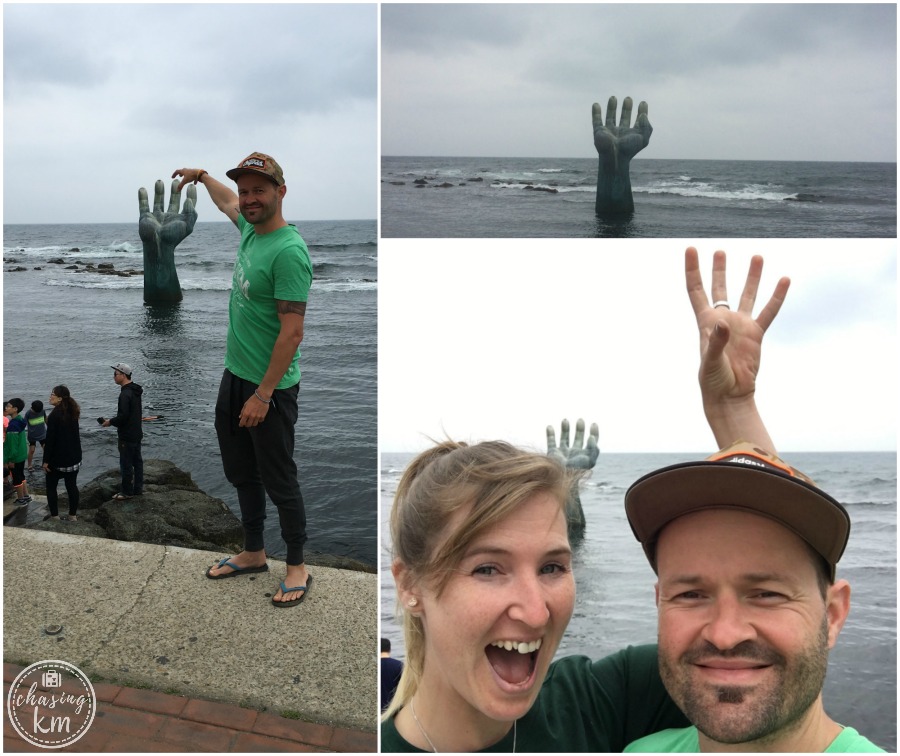 Guerilla camping (and beach camping) has been the best thing we’ve done in Korea. It allows us to escape the city and get some reasonably fresh air and enjoy a bit of nature. Being able to camp just about anywhere has made it a lot of fun to explore the countryside.
Have you tried camping in Korea? Have any favourite spots?
April 19, 2016 Kayley Chislett

Here, I will try to share my experiences fishing in South Korea. I have done mostly bass fishing with the odd trip to the ocean and a few attempts at catching some species on fly. Most of the dams I have fished are irrigation dams which means their water levels can fluctuate dramatically as the seasons change.

I found fishing in Korea to be quite difficult in the beginning as my forays were hampered by public transport and by very heavy fishing pressure in most areas. I will share locations I have found, baits I have been successful with as well as photos and videos when they are available.
I have been quite fortunate in that we bought a car towards the end of 2015 and my reachable fishing venues and times increased quite a bit. Another good thing was running into a local Korean fisherman who speaks some English. We have since become good friends and he has taken me to many fishing spots around the area we live and introduced me to a few new methods/lures etc to catch some bass.
Most Korean fishermen of the “old school” variety who like to set themselves up in one spot for the day, put up to 15 rods in the water and sit and wait in the hopes of catching a fish. They fish mostly for crucian carp. They tend to frown on bass fishermen disturbing their peace and also kill any bass they get as by catches. Also, fishing in Korea is not regulated in most of the country so they take whatever they want out of the water, regardless of size,species,time of year or fishing method.
Bass and bluegill can be found in most bodies of water in Korea as they were introduced as a food source in the 1960’s and have spread quite prolifically. They are both hardy species and have put heavy pressure on native fish populations fighting for the same food sources.
Feel free to post any questions or comments below.