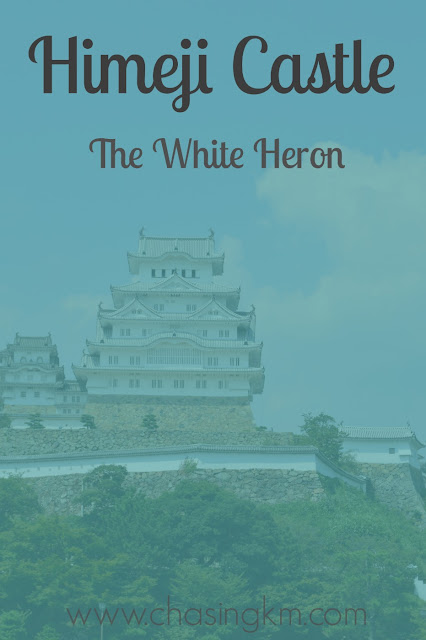 Truly one of the best sights we saw on our recent trip to Japan. Perched majestically on top of a hill, it looks over the town of Himeji in Hyogo Prefecture, Japan. It is also known as the White Egret/Heron as it supposedly resembles a big white bird ready to take flight. 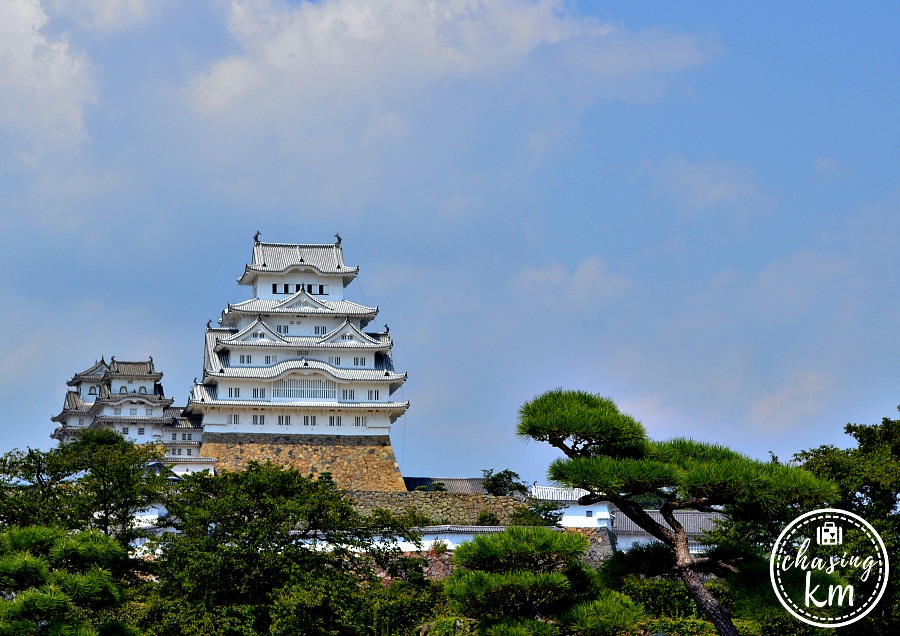 There has been a castle (or fort, at least) there since 1333. It has been maintained and modified a few times since then though. It was first built in 1331 and the current structure completed by 1609. Most of it has been there for at least 400 years, pretty impressive!!!
We went there by train from Kyoto and it took about 3 hours and a few transfers. It only took us this long because we were using the Kansai Thru Pass and wanted to use the trains that were included in this (i.e not the JR train which would have made a more direct journey). It was still definitely worth the trip.
It was the middle of summer and the middle of a heatwave. Turning left out of the train station and heading in the direction of the castle almost immediately brings it into view. It is a magnificent sight that only gets more impressive the closer you get. It was about a 15 minute walk to the castle grounds. My advice would be to get there as early as possible as it does get very busy and they only allow a limited number of visitors per day. 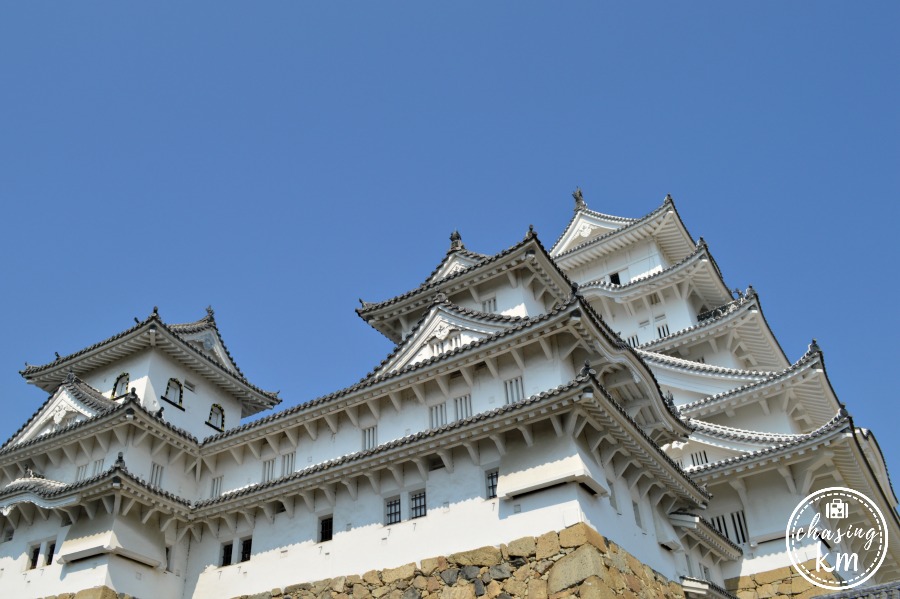 You can choose to just view the castle from the grounds or pay to go all the way to the top of the keep.  It was more expensive than most attractions, going at 1000¥ per person. Pay the money, it’s worth it.
We bought our tickets and (kind of) patiently, queued with the masses to get inside the keep. It took about an hour to make our way inside, of which most time was spent fanning Kayley and putting a wet towel to her face. She was not handling the heat! Just before you enter the keep itself you have to remove your shoes and put them in a bag to carry with you. This is because the majority of the castle is still the original wood it was built from!! Most of the building is made of wood with the walls and a few of the smaller defensive buildings made from stone. 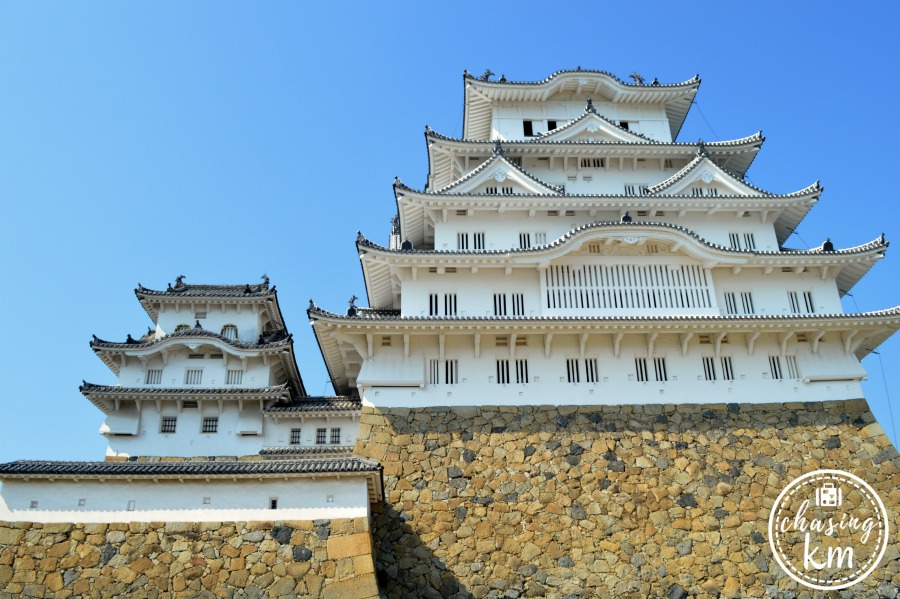 It’s truly awe inspiring to be inside a building that is as old as Himeji Castle. Seeing the original east and west wooden supporting pillars that run all the way from the ground floor to the top of the keep (on the 6th floor), stairs and floors that are polished by thousands of feet. Most of the keep is bare with only a few plaques denoting what a certain area was used for back in the day. No furniture or weaponry, (although the wall mounts for the swords and spears were still evident), no garish displays of what life used to be like. Just a genuinely old and impressive castle that is mostly still in its original form.
The view from the top is also breathtaking. The castle is perched on top a hill in the middle of the town and as you make your way around the top floor you can get  views of everything surrounding the castle. There is even an app you can download that uses your phone camera to show you what the surrounding area looked like and where buildings were etc. 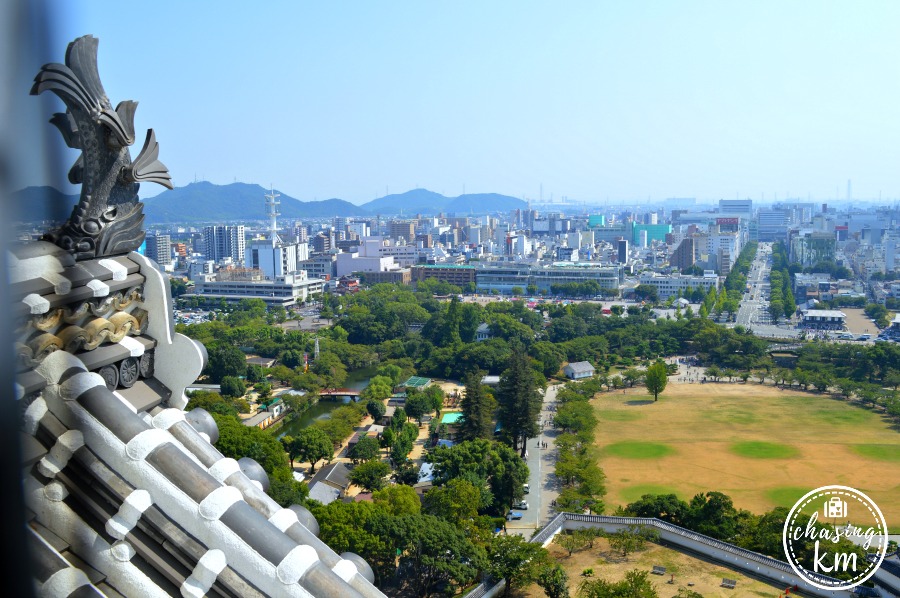 Once you exit the keep you have the option of walking along the walls and viewing a few of the secondary buildings. We chose not to do this as we had a few more places we wanted to see that day (Kobe – for some beef!!) on our long trip back to Kyoto. 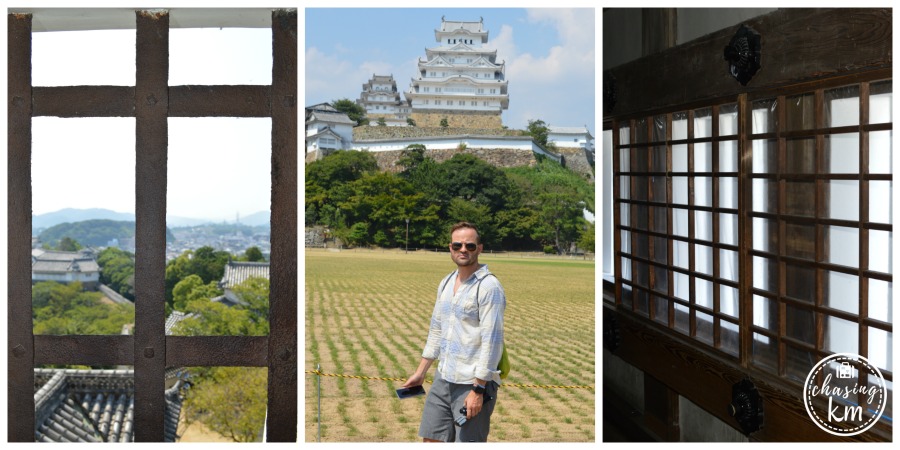 A few days later we also visited Osaka Castle which was a bit of a let down. The grounds are beautiful and you get amazing views of  Osaka from the top of the building but the castle is just a modern replica and the inside is like a museum. If you want to read more about Osaka Castle, our friends Megan and Scott were there a few days before us and wrote about it here.