The second month back in Korea is almost done, hence time for our May Update. This month was a whole lot easier after a salary each and having our own little home so close to the school. I started yoga at the local community gym (which is brand spanking new – they had only begun building it by the time we left last year). I’ve been applying for some jobs, and after a long dry spell of no responses, I’ve slowly started getting an interview here and there. Progress! So please keep me in your thoughts and prayers.

We celebrated Marks birthday for most of the weekend (and month actually – the guy is finally learning something from me). We went out for drinks on Friday evening and took our pack of cards with us. Yes, we are those people. We enjoyed a fun night out, chatting and playing cards at two of our favourite bars. On Saturday evening, We went out for dinner with Sunny, her husband and two of his friends. Dinner extended to drinks and fruit platers and pizza. This was followed by the third round of sake and Japanese food. Korean people cannot drink and not eat. I felt like I was about to pop!

On Monday we had a public holiday, due to children’s day falling on Saturday. We went with Sunny, her mom and sister to go visit her gran in Tongyeong, a group of small islands about an hour and a half away. Her gran lives in the cutest little village – DongPirang. It is a small hillside town, complete with tons of murals and cute cafes. As Teongyeong is a seaside town, naturally there is a fish market. Mark has been really keen to try out Nakji – which is Octopus/ But it is a live octopus that you choose, then it gets chopped up and put in a bowl with sesame oil and soy sauce (or something similar)… Thing is, when it arrives it is still all squirmy and stuff and you have to chew and swallow pretty quickly. Not sure about you but this is something I definitely cannot do.

After the fish market, we walked around Dongpirang and took pictures with all the cute murals. After that, we went back to Sunny’s gran’s house and had some more fruit and snacks and played with Sammy – Sunny’s cat who now lives with her gran. Before heading home, we had a (long) drive around the island before having one last dinner (I feel like we ate all day).  Like every city in Korea, Teongyeong is famous for its own food too. A specific kind of gimbab. It’s plain rice and gim, in small rolls. But with “very delicious” banchan (side dishes) of kimchi and spicy squid and odang. I mean, it wasn’t terrible and it did have its own charm, but nothing to write home about. BUT, because we had nodded in agreement with their exclaims of delight, we got given a whole bag to take home for breakfast, complete with some soup, double bagged in two packets. Yum – soybean soup, rice and seaweed for breakkie. 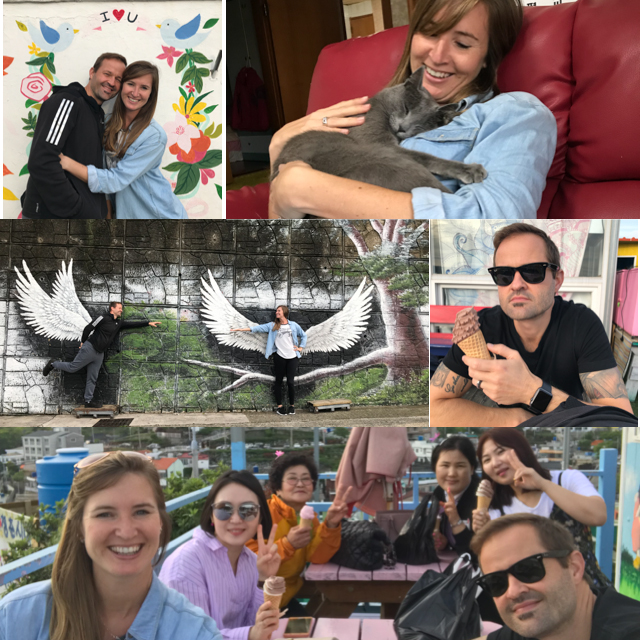 The second weekend in May brought a visit from our friend Sam. Sam lives in Suncheon so she grabbed a train after work and headed over to us. We met her at the train station and took her to O’Briens to indulge in some burgers, fries, mozzarella sticks and wings! Despite our town being fairly small – we are lucky to have a fair choice of western food options!

On Saturday Sam and I headed through to Busan to visit Gamcheon Cultural Village. It’s the sweetest little hilly village, filled with brightly coloured houses and cute cafes. Mark hates it, so chose not to come with us. We walked around, taking pictures and enjoying the outdoors (even though the weather turned quite chilly. By then, we decided to head through to Nampodong, our favourite little area in Busan. It is home to the Busan International Film Festival and has such a fun market and all sorts of alleys selling different things. My favourite of these alleys are the second-hand stores and the food street! Mark joined us here where we ate and shopped around before heading back to Jinhae (in the pouring rain). Ed and Bianca met us in Yongwon and we had chicken and beer and spent the evening chilling at our sweet little home (which I think was filled to capacity at 5 people). 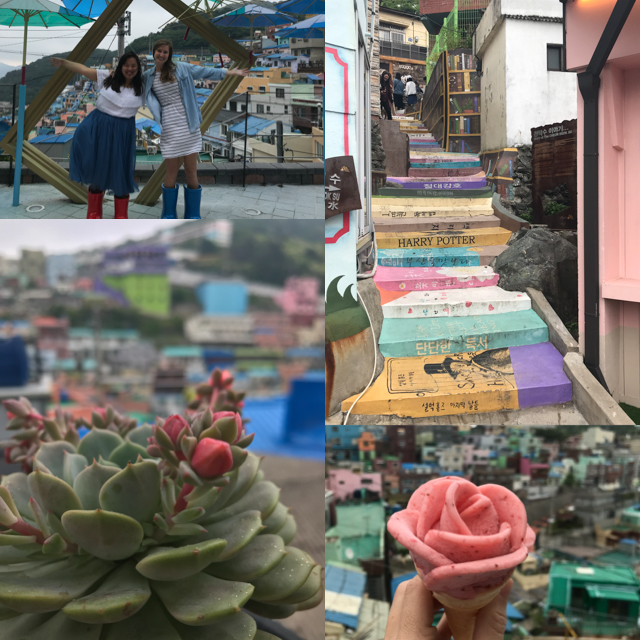 On Sunday Mark went fishing with Son, and Sam and I decided to visit Yeongungsa – a temple on the edge of the water. Due to Buddhas birthday being the following weekend we assumed it would be beautifully decorated with brightly coloured lanterns every… It wasn’t. Even worse, the scaffolding was up all around the temple, in the early phases of decorating, so you couldn’t even enjoy a clean view of it up close. Here are some pictures of it when Mark and I went with Raina before we left Korea last year.

Marks, fishing friend Son invited us to join his family and friends for a camping trip up near Jirisan, at Sancheong. We went up on Saturday morning and enjoyed a day of eating, eating and more eating. Thanks to Korea’s great love for technology, I was able to watch the entire royal wedding live stream on Son’s tablet, connected to an external power supply, right around the campfire. On Sunday morning Mark and Son went fishing at a nearby reservoir early in the morning and were back in time for breakfast. We ate three meals before 10:30 am when we decided to leave as they were preparing the fourth. Also, Sunday marked 4 months of being married – what a gosh darn adventure it’s already been! 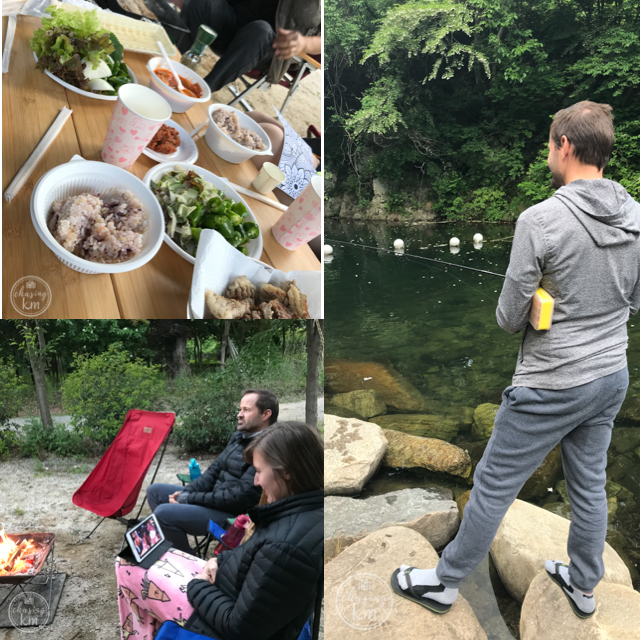 Mark left to go fishing with Son in Hapcheon at 7 am and returned at 10 pm. I watched half a season of The Handmaids Tale, had a shower and then watched Jersey Shore Family Vacation, before putting pajamas on and getting into bed. A great day. On Sunday we went to explore a nearby beach to prepare for summer. We arrived to find so much litter, a rocky beach, and millions of those prehistoric-looking cockroaches scurrying everywhere. We went home. Later I went to meet Kim (my old co-worker from Ungdong) in Gimhae for lunch and to meet her baby Jumi. It was so nice to catch up with her, and darn, Jumi is CUTE!!! Gyumi Jumi! (Gyumi means cute).

From there Mark and I went to Changwon and met up with Ed and Bee. We had an al fresco picnic dinner in the park. Yay for summer coming along (even though we have been avoiding winter since January 2017)!

Another month down already. I can’t believe that we have been here for two months now. Time is flying.

Lots of love, all around the world xx