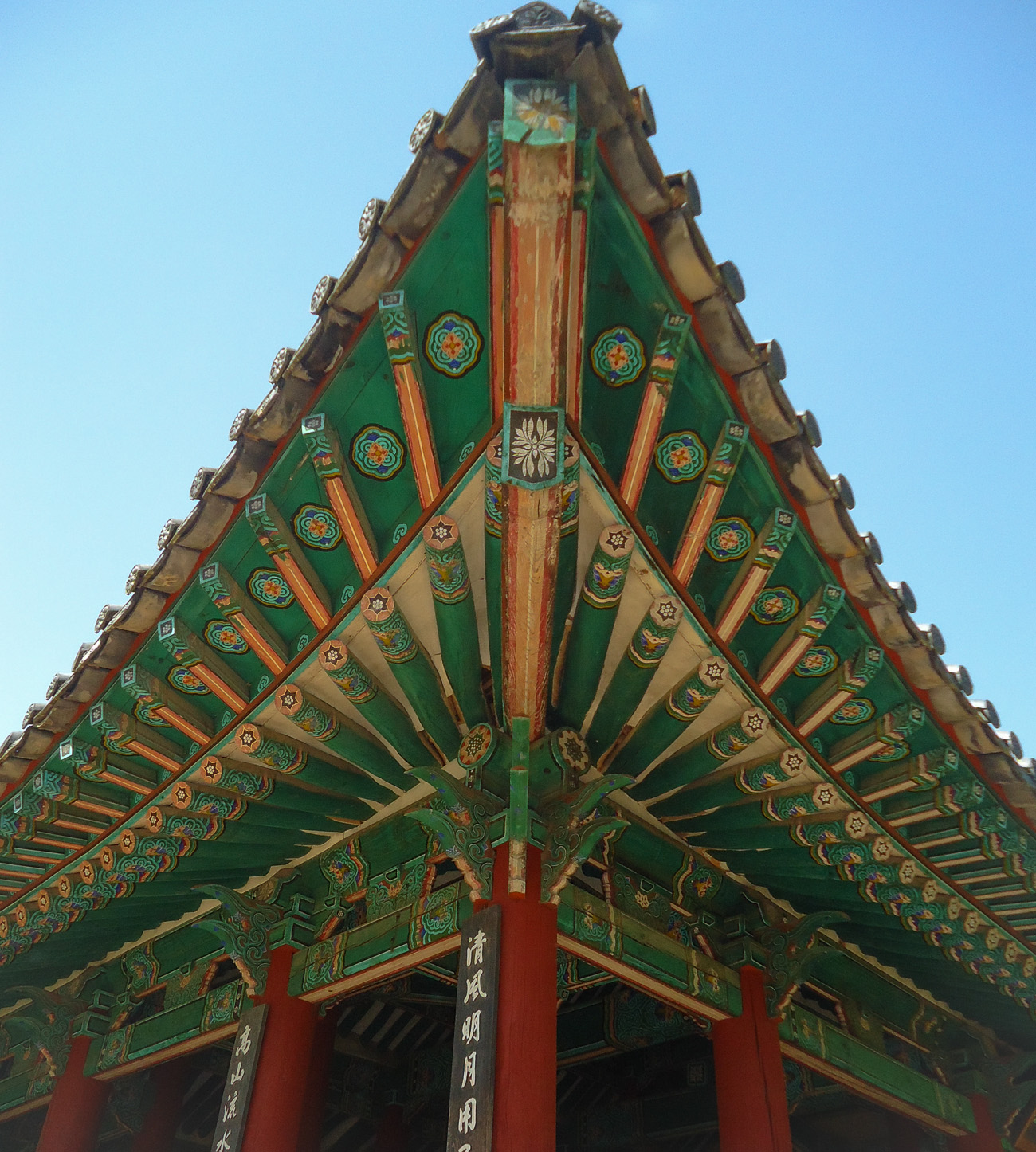 So as I mentioned in our 2017 catch up, I would start making these monthly updates public. The last time we were here I made a PDF update every. single. month. for the whole two years. It was like a newspaper with different columns for each activity we did that month, compete with relevant photos. It was kind of the inspiration for our blog too, but a bit more personal and to keep moms, grans and aunties happy! I would just email the PDF document to my family. If you’d like to read those you’ll have to ask my mum. She probably has a flip file with every one of them printed and filed in chronological order! In this way, it’s a memory for us, as well as keeping me writing and something going on the blog regularly. So here it is, our April update!

After the visa process taking so long with collecting, certifying and sending off documents, once we actually submitted our passports to the embassy, it took a day and a half. That didn’t give us much time to book flights and say final goodbyes to everyone but we had known we were on our way out so tried to make sure we caught up with people in the weeks before we left. sorry if we didn’t get to see anyone “one more time” – those do add up and eventually we just had no more time.

Off we went to the airport with my parents (after a game of Tetris getting our bags and four people into the car). We met Marks parents and sister and brother-in-law and OUR niece and nephew (finally I can call them mine!) and said a quick goodbye. We checked in our luggage (which couldn’t be checked all the way through to our final destination because there were four locations and the luggage tag only supports three! So we had to make the choice of which airport we would like to collect and recheck our luggage. HMMMM. We chose JHB so that we could forget about it in a couple of hours. We are getting much better at goodbyes, that’s for sure. No tears from me this time and barely any from mum (thanks mum) also I turned away a lot sooner and didn’t look back! It may have helped that we were looking forward to our SLOW lounge visit as we had racked up a few from all that credit card spending we had been doing in the USA. So we had the consolation of food, drinks and massages awaiting us after goodbyes. 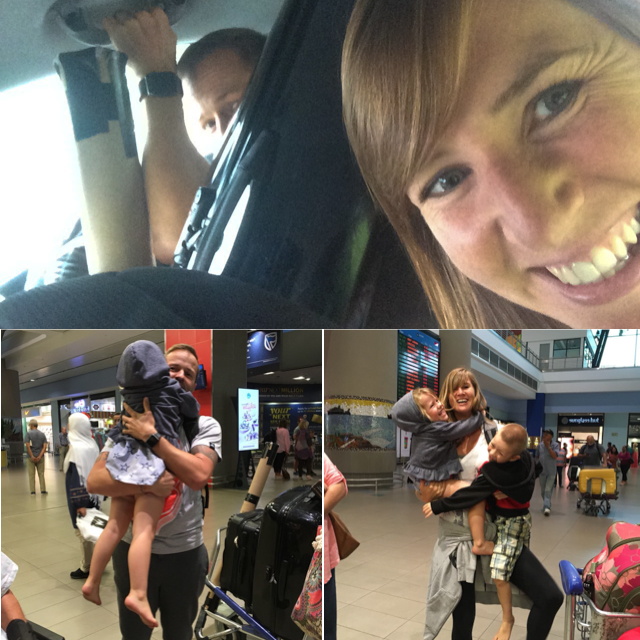 Arrival in JHB and collecting and rechecking our luggage proved a little difficult. Apparently, Emirates and SAA have different scales so now our one bag was over 23kg. Despite the one weighing only 17kg and only having three bags instead of our allocated 4, we were made to repack the bags. Not fun. But, we made it through. We then had an 8-hour flight to Dubai, followed by a 7-hour flight to Hong Kong, followed by a 3-hour flight to Busan, our final destination.

Marks old co-worker and friend (also our new boss), Sunny, and her husband came to collect us at 7am and take us to our accommodation. We didn’t get too much sleep on each flight (probably about 3 or 4 hours on the leg to Dubai) so by the time we arrived we were pretty zonked. Let me just tell you, this flight route to Korea is insane. The jetlag is insane and I wouldn’t wish it on anyone. Almost three weeks down the line, I still am battling to get to sleep and literally can not pull my eyes apart in the morning.

First on our agenda was a nap which left us feeling more like zombies than before. We had to go to school that day, but luckily just to get our schedules and get oriented. We went back home and decided to take a walk to the Jinhae Cherry Blossom Festival (Jinhae Gunhanje Festival) that had just started. Mark is not a fan, as the pollen really aggravates his allergies as well as the crowds of people at Korean festivals. 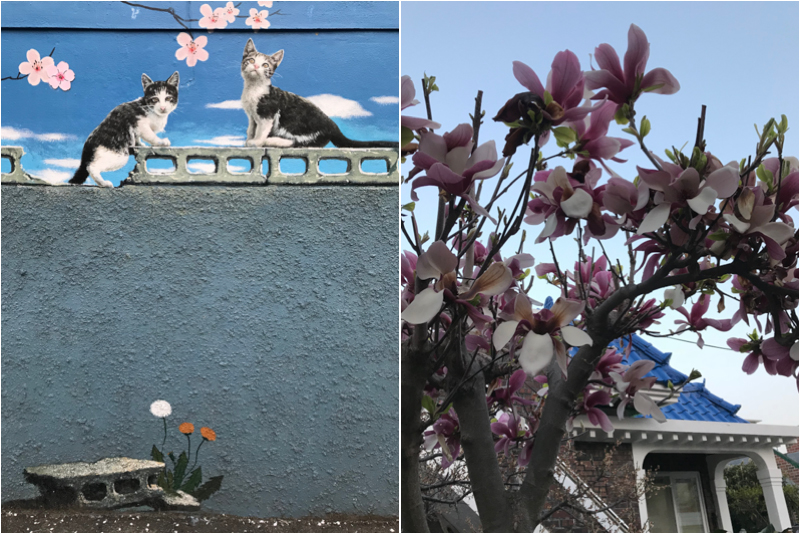 We stayed in our friend Bianca’s apartment in Jinhae (she doesn’t use her apartment as she stays with her fiance). It was such a godsend for us as it meant already having a place to stay and all the things we’d need initially which takes a huge strain off moving to a new place. However, the apartment was about a 55minute bus ride from our academy, which meant spending 2 hours on public transport a day. It also only had a single bed, which we managed with for almost three weeks (thank goodness it was cold). So we began the hunt for an apartment closer to work!

Our new home is 265m from work and travel to work takes approximately 3minutes on foot. It’s such a huge convenience. With our work schedule being pretty irregular (we have an hour or two hour long breaks between classes sometimes) it’s such a pleasure to be able to come home and do stuff (like cook dinner on those days we work till 8 pm). Korean apartments are pretty small. Last time we just had a one-room each, equivalent to a bachelor flat – no separate living and sleeping area. This time, however, we have a two-room! Which means a bedroom and a living room! It makes all the difference in the world to our productivity and getting a good nights sleep! Speaking of a good nights sleep…we ordered our new mattress a few days too late, so when we moved in last Friday we were bedless until It finally arrived on Wednesday night! Also, now we have a living area so more place to host guests! Get on over here – spaces are limited! 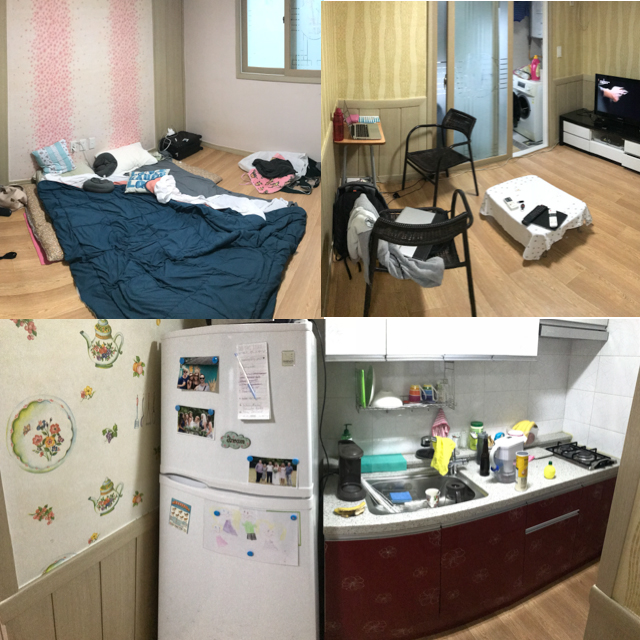 The first weekend back, still jetlagged and me holding onto a nice big cold, we borrowed Sunnys car and headed off to Yeosu for the weekend. You may remember our friends Stephanie and Ryan from Hedgers Abroad who did our engagement shoot? They were packing up and about to head back to the USA for some travels at the end of April. We squeezed in one last reunion with them and Sam from There She Goes Again. It was great hanging out and playing games with everyone. Sam also couldn’t stay away from Korea and found herself back here after leaving for a little while. There’s just something about Korea it seems, that keeps you coming back for more. 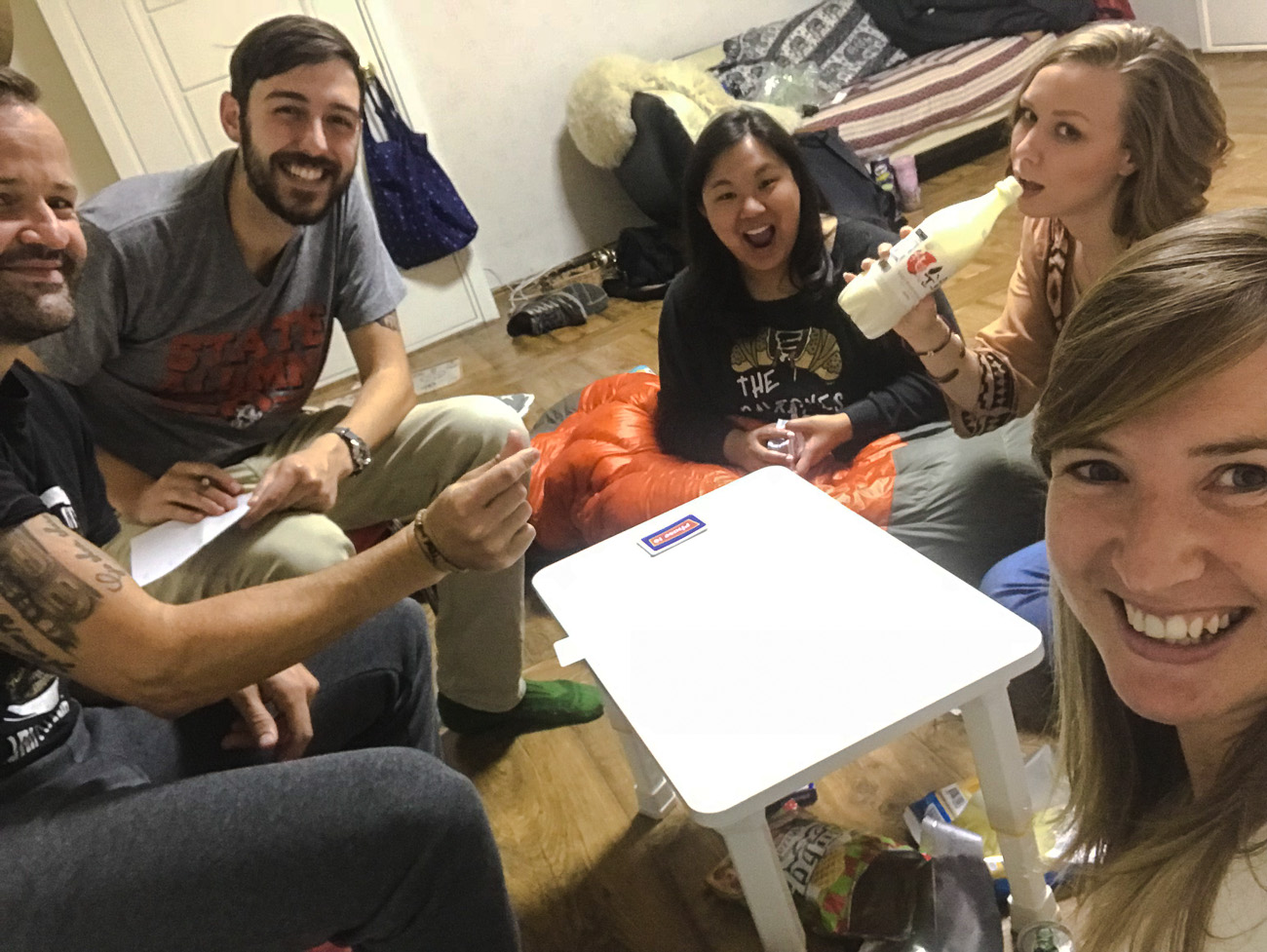 We left early Sunday morning as our friends were heading to the Hwagae blossom festival. We were done with blossoms, pollen and pollution. I had absolutely no voice after playing cards and laughing and chatting ’till well past midnight. We got to have a rest and tidy up before meeting my old co-worker HyunJu and her daughter HaYeon for lunch and coffee. It felt like no time had passed since I last saw her in New York in June. 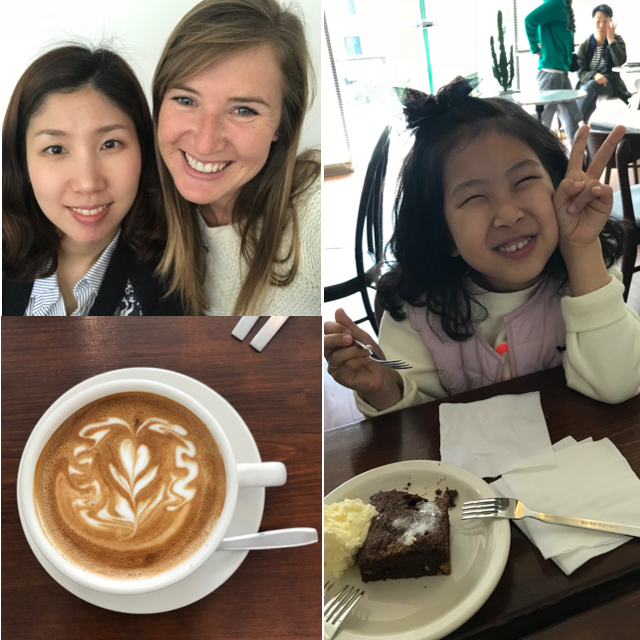 Our second weekend back, We headed to Seoul. Mark had seen that there was a touch rugby tournament happening with his old team and couldn’t resist taking part. Of course, I went along – our friends have a super lovable golden retriever who I can’t resist. Our friends also love board games just as much as we do! 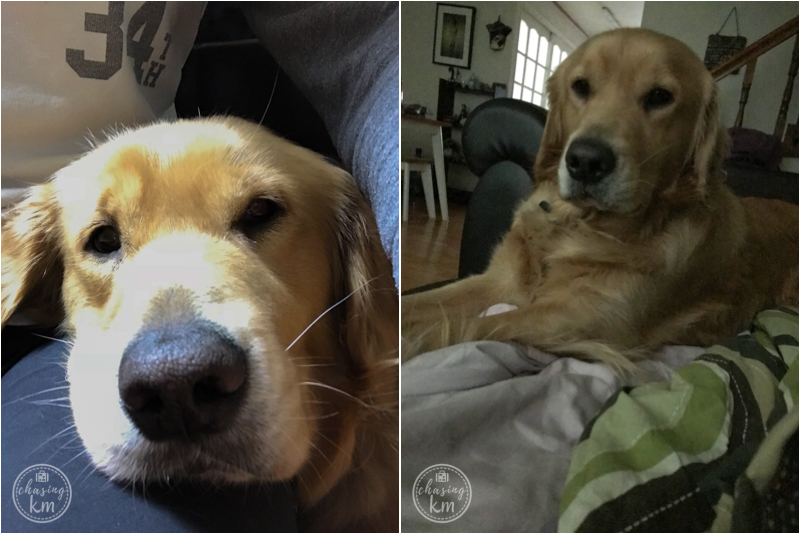 It was a pretty chilly, rainy day outside, along the Han River. I ended up doing the timekeeping for their games. marls team – Up&Go won the premier division of the tournament so that was great. It also meant bar tabs and a festive afterparty at Noksapyeongs Hidden Cellar. On Sunday we met up with another of Marks old coworkers, who now lives in Seoul. You may remember I went to her wedding (Mark missed it as he had curriculum training that finished late). We had lunch, met her baby and headed back to the bus terminal for our 5-hour trip back home. 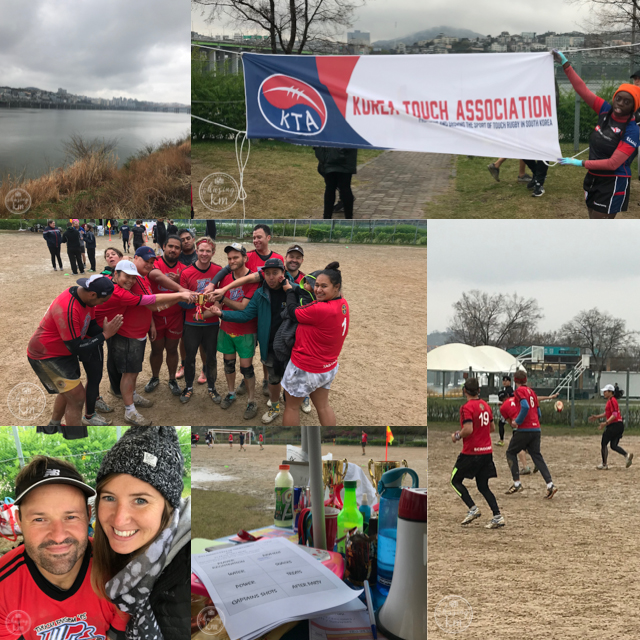 Our third weekend was spent moving into our apartment. It took us two trips from Bianca’s house to our new place in Yongwon to move everything across. Ed and Bee came over for chicken, beer and card games to warm up our new home. The weekend was mostly spent settling in and nesting in our little home. 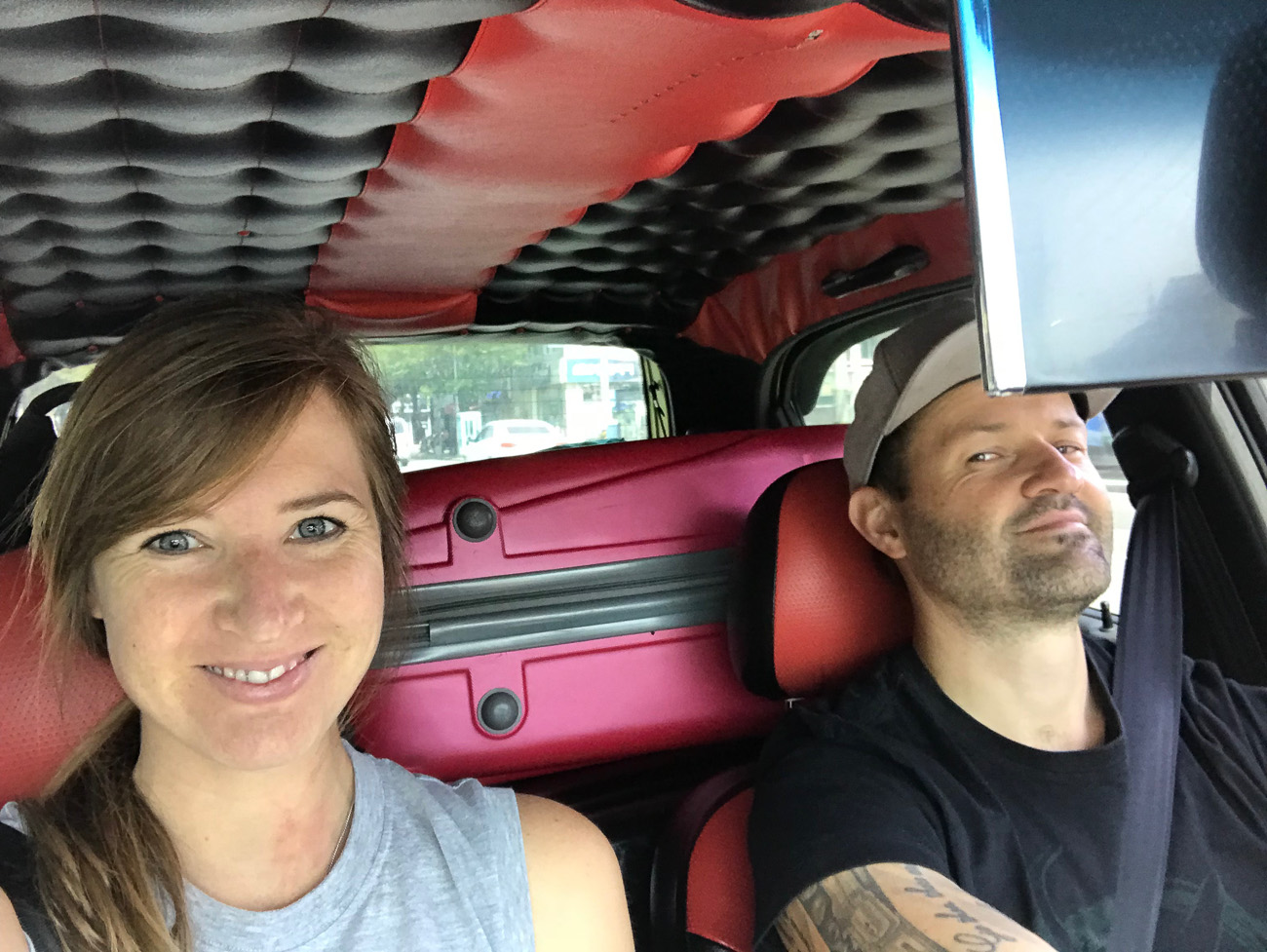 On Sunday we went for a hike on a small island ten minutes from home. The island was called Gadokdo and we hiked a 5km loop up Cheongseongsan, down and around. It was a pretty overcast and dusty day so the views weren’t great. We should have been able to see water in every direction. We managed to get a slight glimpse of the giant bridge going to Geoje Island.

Our fourth weekend was spent hanging on ’till payday! We went to Trivia at Next on Friday evening and spent Saturday doing things around the house. On Sunday Ed and Mark went fishing and Bianca and I went for a hike/walk around Yongwon. On Sunday afternoon we went to Sunny’s house for lunch as it was her husbands birthday. Sunday evenings are for scary movies!

See ya next month!