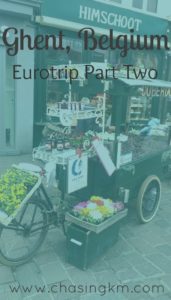 We are finally on the adventure of our life time (up ’till now)! After resigning from our jobs teaching English in South Korea in February, we are traveling through Europe, visiting Paris, Belgium, The Netherlands, Germany, Czech Republic, Poland and Austria. We spent almost a year planning our two month trip to Europe which eventually evolved into a ten to twelve month journey that will see us crisscrossing Europe, hopping on over to Ireland and then onto the USA for a few months. South and/or Central America may also make its way (hopefully) onto our itinerary.

The way we have planned our travel is a combination of hostels, couchsurfing, workaway and friends. This means we get to experience regular life and meet locals in the places we visit as opposed to just being main stream tourists. It also means we can stretch our budget further and travel for longer! We’ve already met lots of people from all over, in Korea and along the way and always appreciate the tips, suggestions and insider information we get. As a result of this we are often adding new places and activities onto our list.

We started our time in Belgium based in a suburb of Ghent (Gent) called De Pinte. Just 10km by bicycle from the town center. From what we’ve seen of Europe so far cycling is a very popular form of transport. With most of the cities/towns having cycle lanes and dedicated bicycle parking lots. As well as most of the city/town centers we’ve been too being bicycle and pedestrian only zones. But just like Korea the scooters also use the sidewalks and cycle lanes, although here it seems to be legal.

Apparently our bums were not yet ready for all the cycling! Our host took us on an ‘easy’ cycle into town on our first night after dinner. Took our rear ends a few days to recover! The old town area of Ghent immediately struck us with its beauty. Cobbled roads to make your bicycle ride feel like you are a bowl of jello on a washing machine, canals reflecting the city lights to take away your remaining breath and cathedrals, churches and the odd castle thrown into the mix. This whirlwind tour by night whet our appetites to come spend more time here exploring. 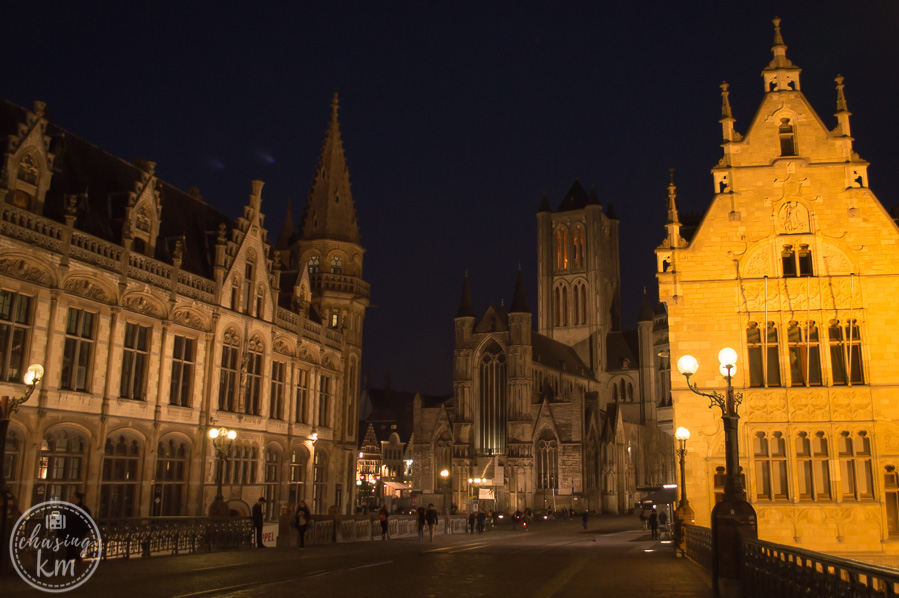 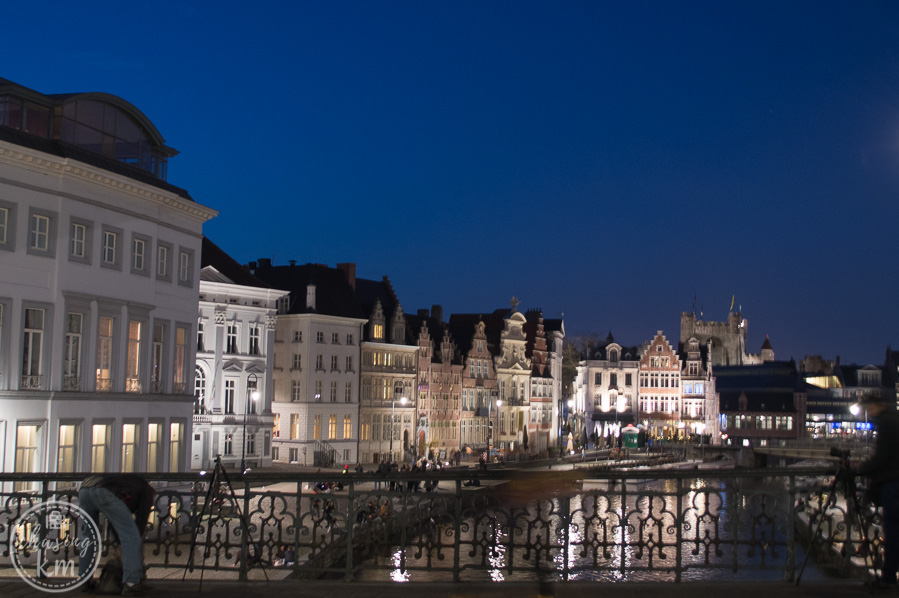 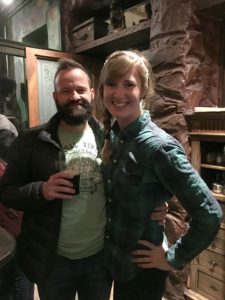 A few days later we had our chance. St Patrick’s day, which was on a Friday, 20km round trip by bicycle and bums slightly recovered. Incredibly enough most of the pubs and the outdoor areas were very quiet. We did however, find one Irish Pub that was bursting at the seams where we enjoyed a few pints of Guinness. Our timing was off and we got caught out in the rain and howling wind on our way home.

A few days of working extra hours meant we soon had another entire day off to explore Ghent. Our host jokingly told us not to tell anyone about Ghent as they don’t want word getting out and have it attract more tourists! Many locals prefer Ghent to Bruges as it is not as busy and touristy. Ghent is also home to the very famous Ghent Altarpiece or The Adoration of the Mystic Lamb as it is also known. This is an amazing piece of art and well worth paying the money to see it. (4 Euro pp) You can also get a close-up look at the sheer detail included in the painting here. No pictures were allowed inside the cathedral.

Gravensteen, the castle in Ghent, is very well preserved and its interior is now a museum of torture instruments.We didn’t go into the castle, but rather preferred to enjoy the views of it from all around ,whilst sipping some Belgian brews. 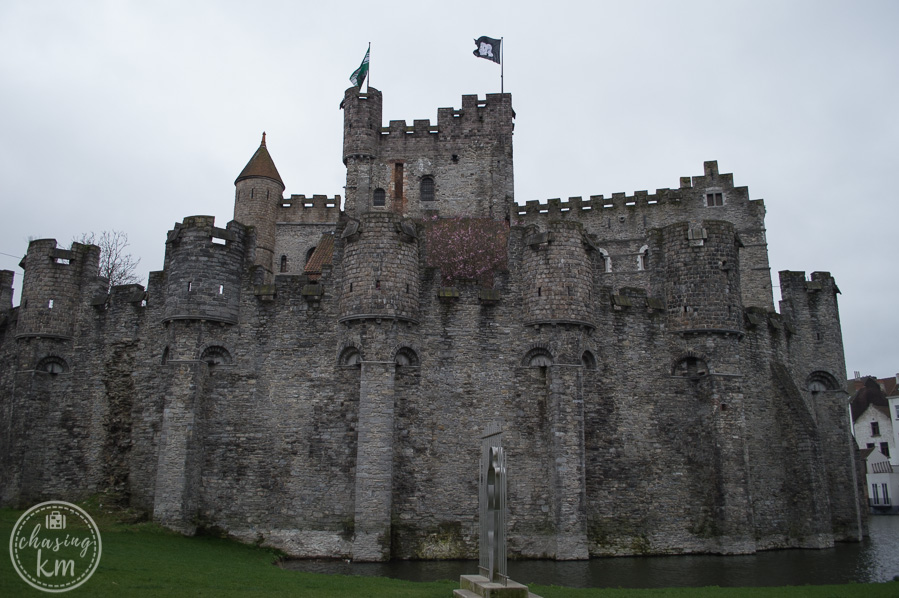 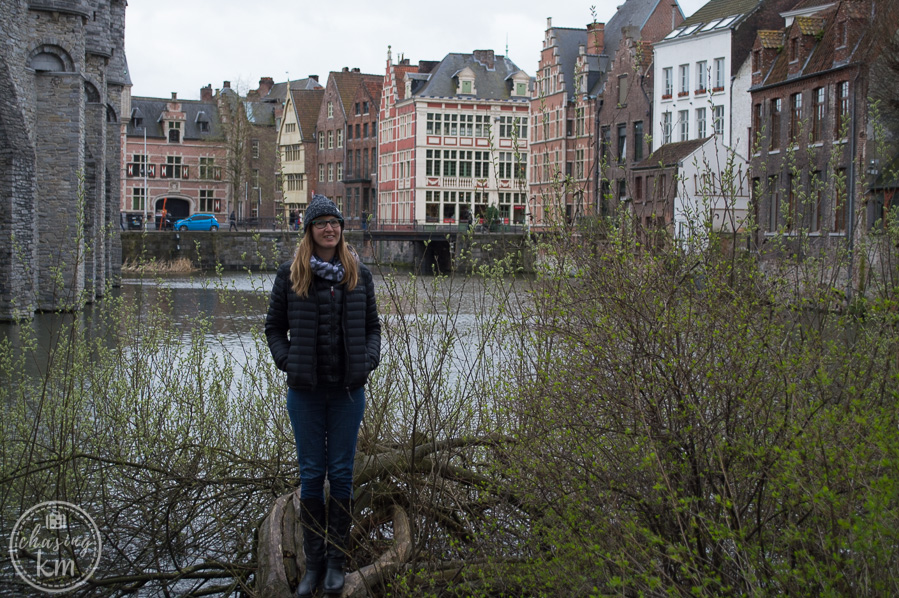 Obviously our visit to Ghent had to include a brewery! We headed to Gruut Brewery to enjoy a few of their local brews. The beer samplers are very generous and the brewery is in the town center. Other famous items from Belgium include, the waffle, friet (chips for us people from SA) and of course, chocolate. 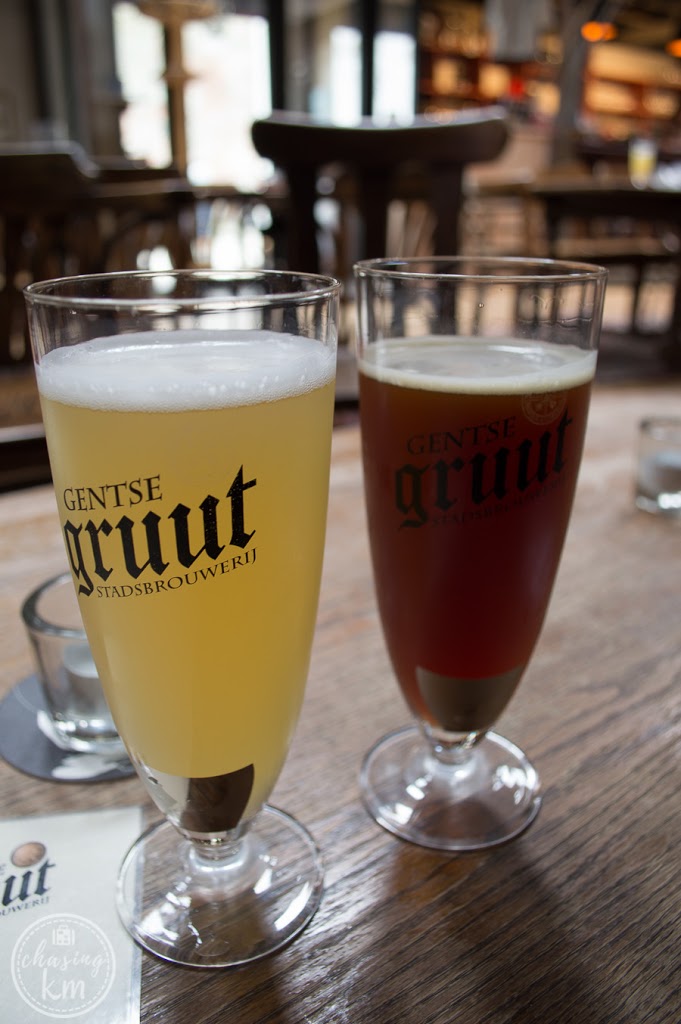 We had to try them all. After much deliberation we settled on Max to try the waffle. It came highly recommended by our host and did not disappoint.  Super light and fluffy  on the inside with a crispy outside. Later that day we tried a street side waffle which was sweet and chewy and saucy and just delicious as well. We couldn’t go without trying some chocolates from Leonidas – the Belgian chocolate shop and had a great time picking and choosing chocolates for our mixed bag. 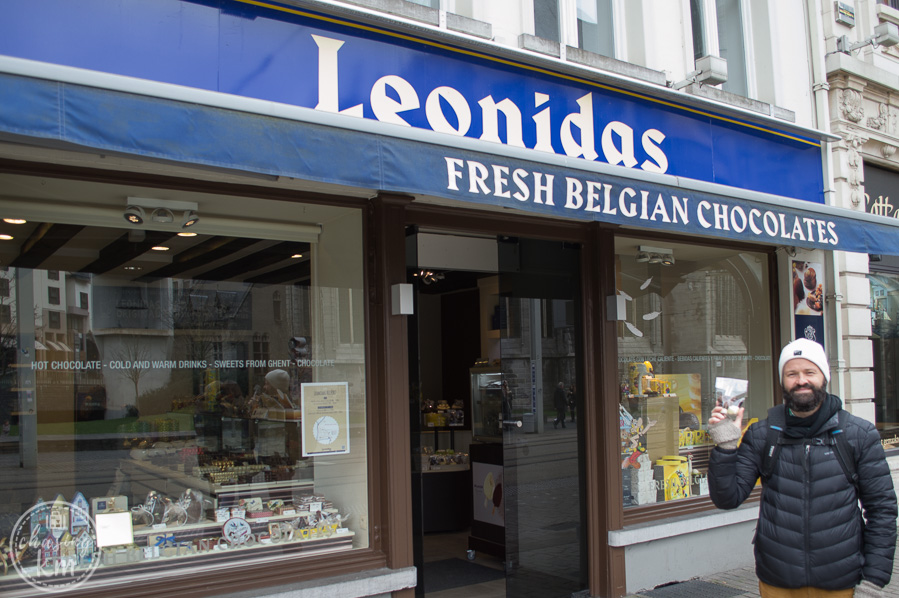 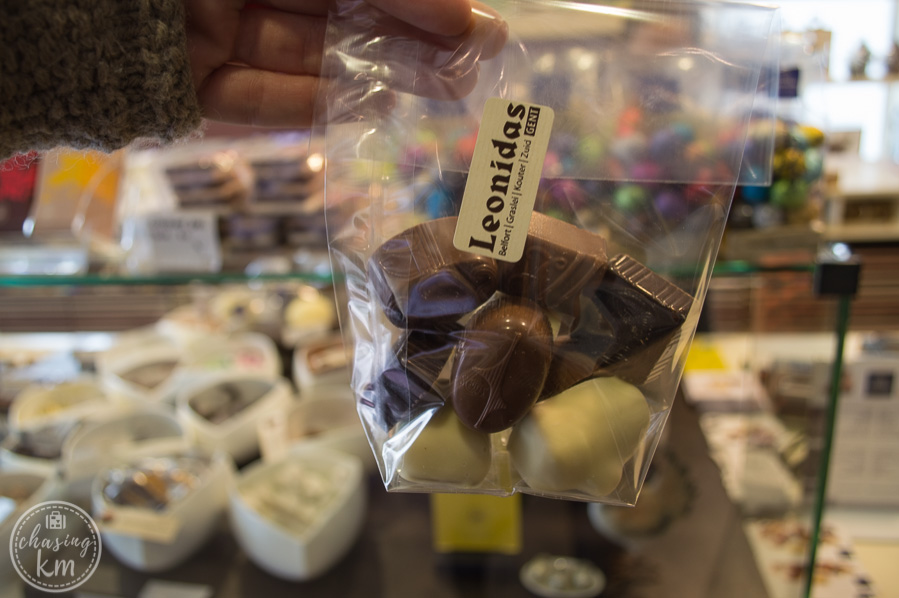 After walking off the waffles we went to the Dulle Griet, translates to crazy lady in English. This pub is named after the giant cannon which is now on display near the town square. The pub however is famous for serving a 1.2L house beer in a big hour glass shaped drinking contraption.(10 Euro) Tricky to drink from once you get past the first bulge! As a deposit you have to hand over your shoe which gets hoisted up above the bar in a basket. Fun to watch all the other people with only one shoe on trying to figure out a graceful way to drink their extra-large beers. To fuel up for our cycle home we indulged in some more Belgian Friets which were served in a large paper cone with a generous dollop of mayonnaise on top. Deliciousness in a paper cone. These can be ordered with a variety of sauces, even a rabbit stew sauce. 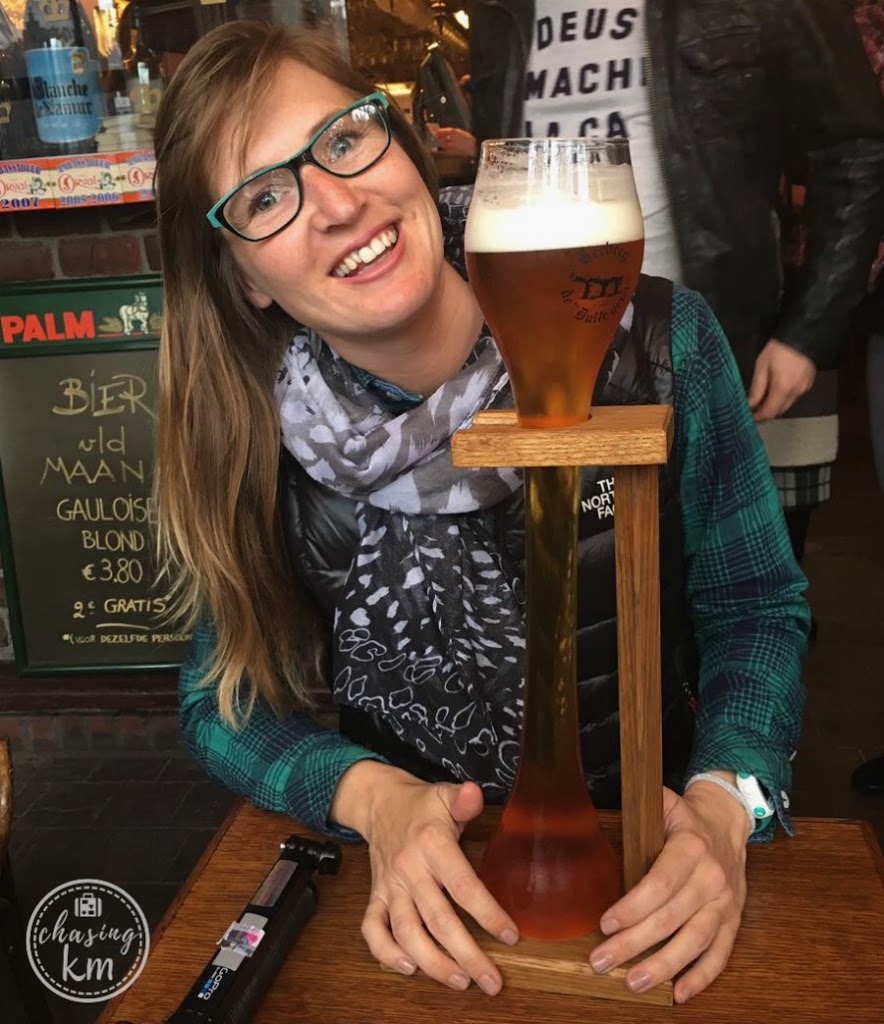 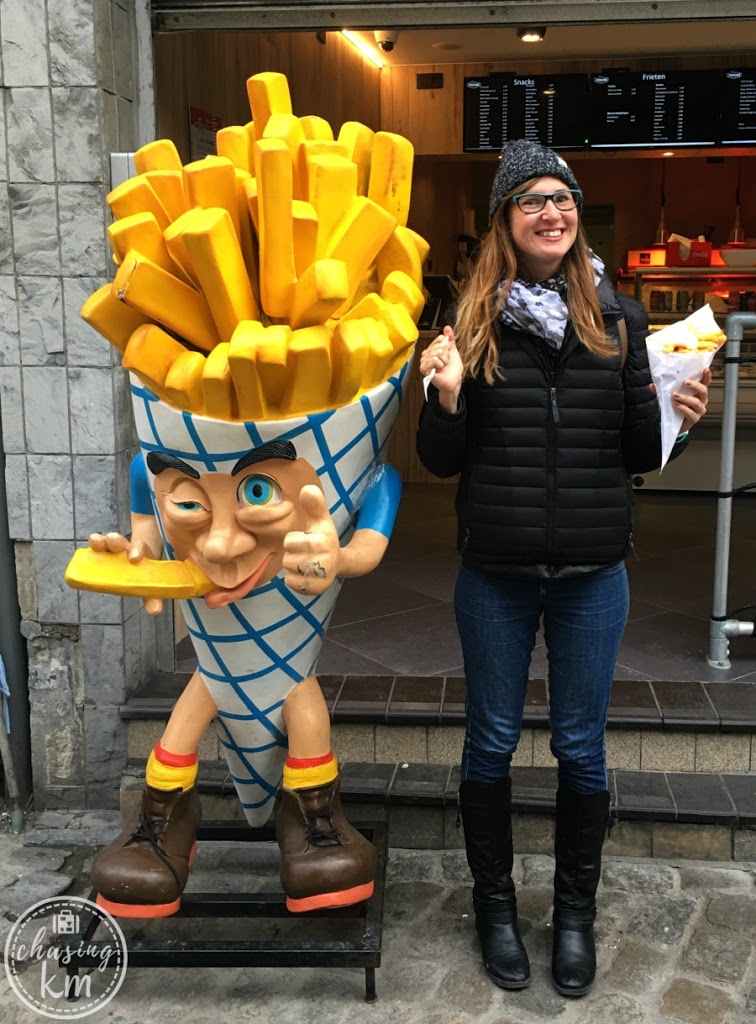 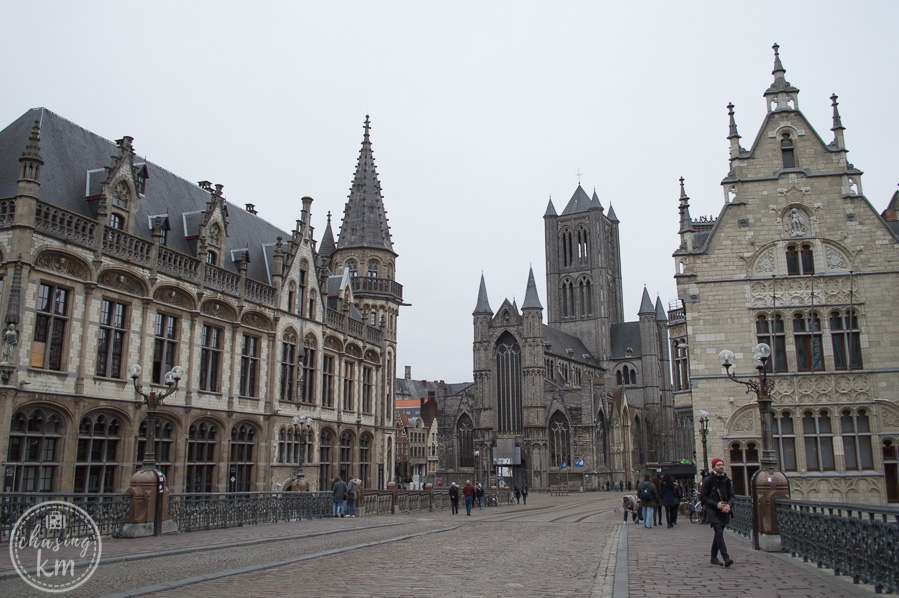 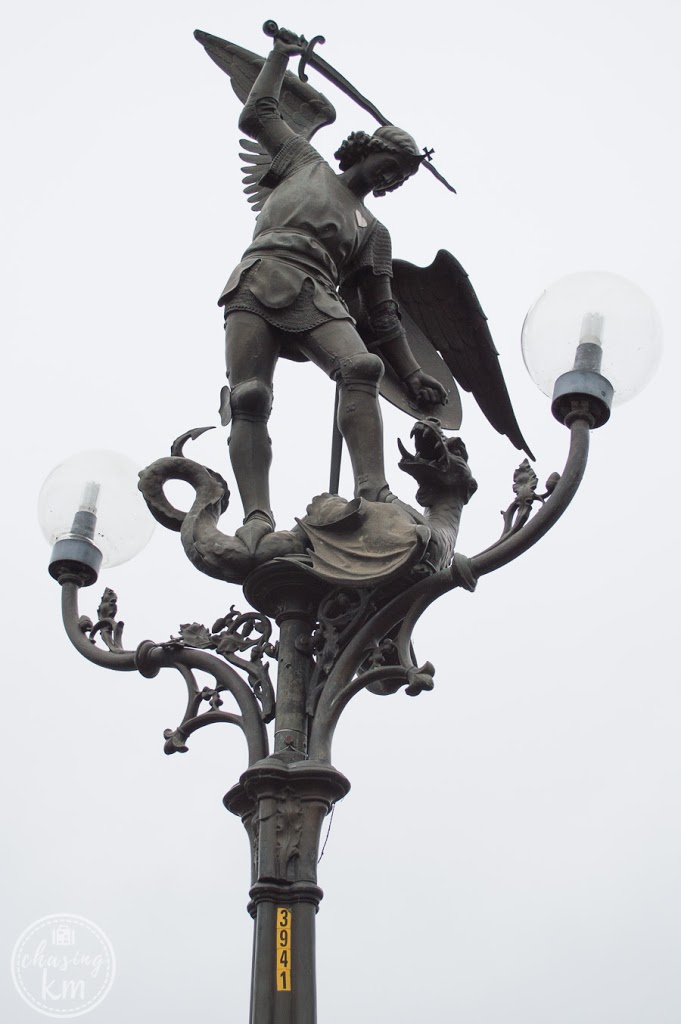 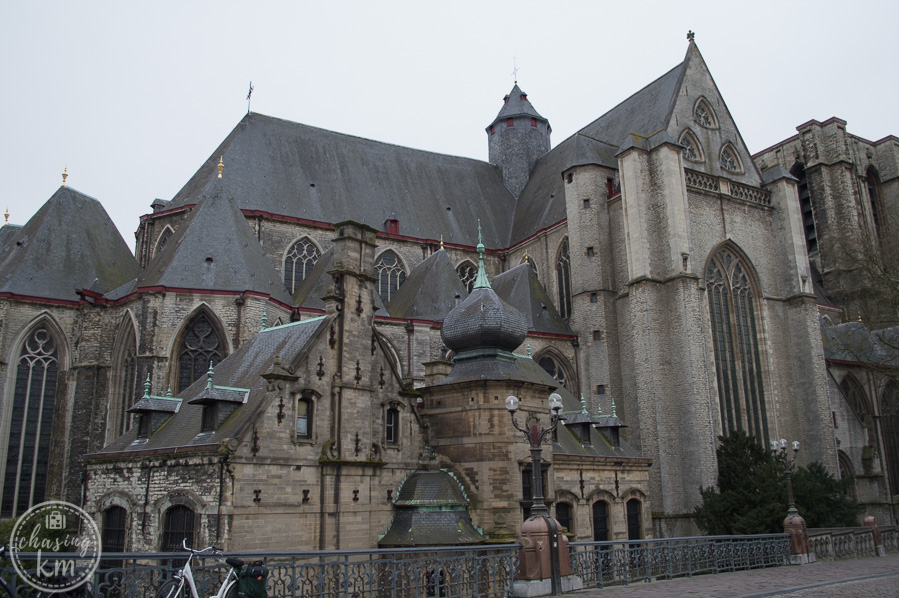 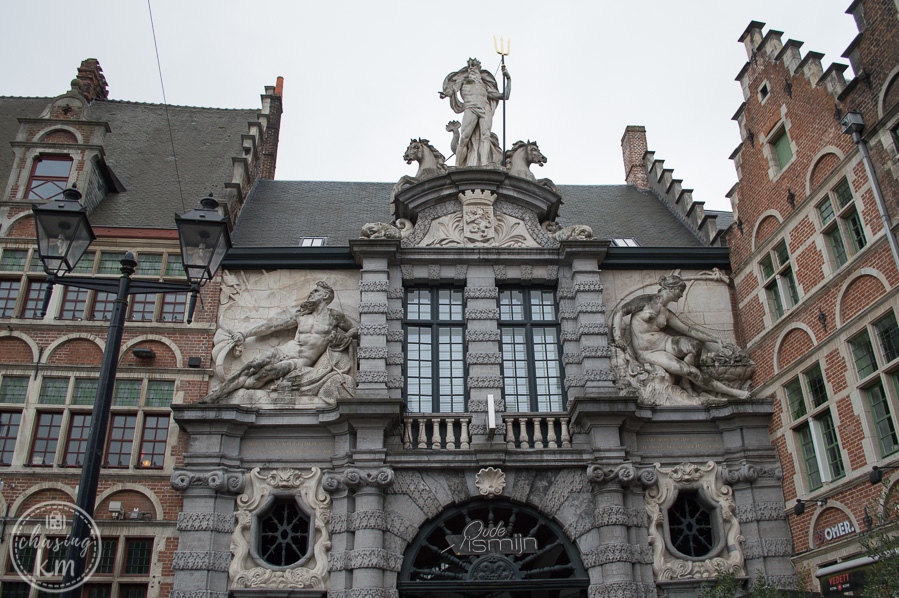 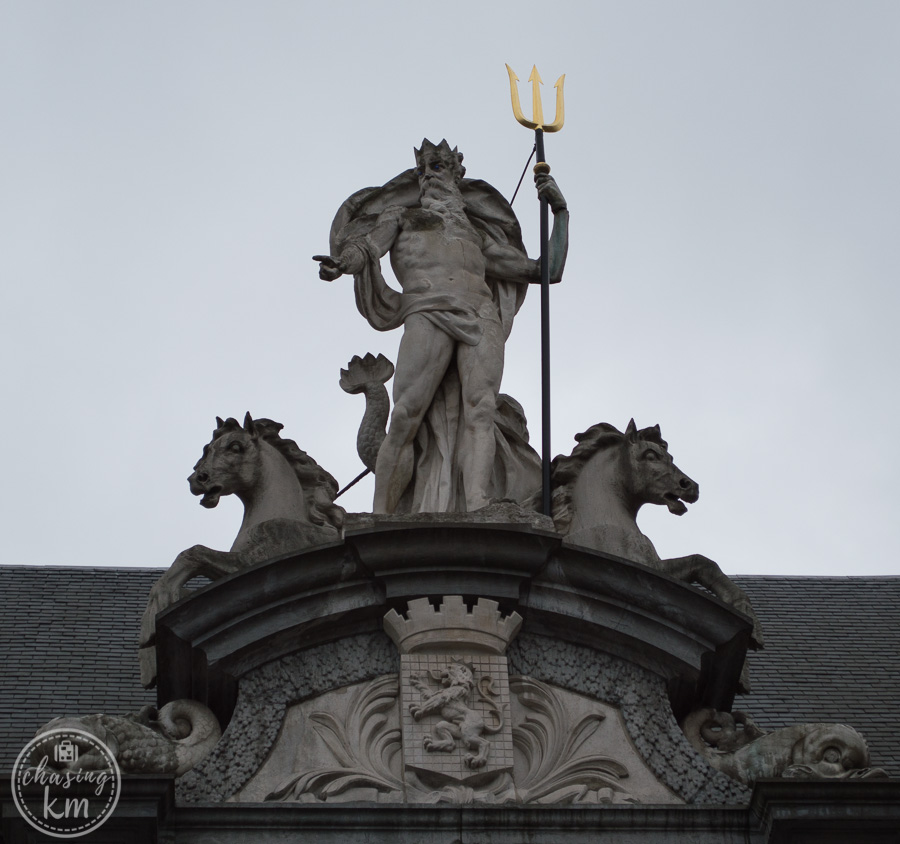 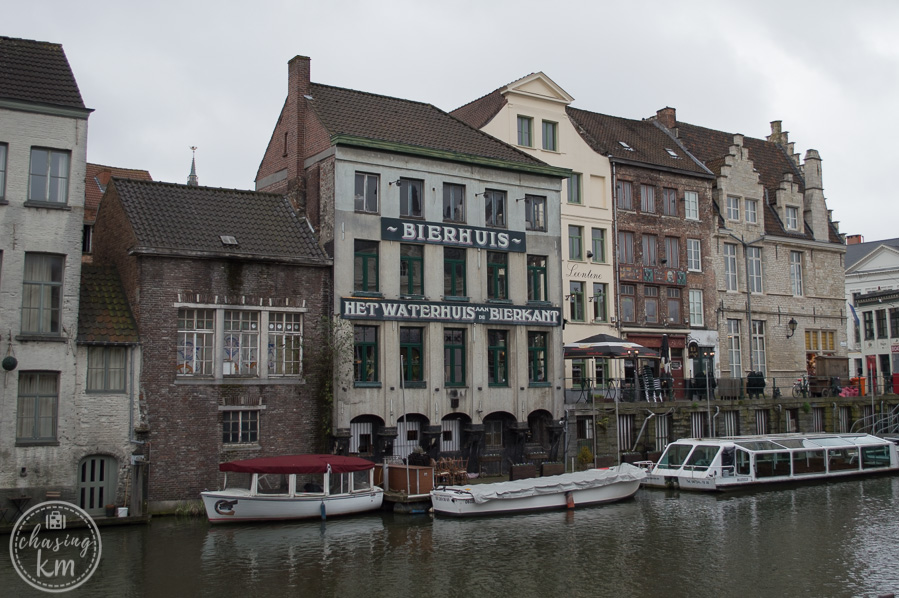 The rest of our time was spent around the house listening to anecdotes from our hosts as well as a few runs through the surrounding parks and a small forest.
The workaway experience, coupled with the beautiful setting that is Ghent, made for a great time in Belgium. We would highly recommend a visit to Ghent if you have the chance. It is filled with many historical landmarks and is not as busy or tourist filled as Bruges. Also, if you see them around, try the Ghent neuzen (noses). Delicious candied fruit treats. They’re purple and cone shaped.

Have you tried Couchsurfing, Workaway or anything similar? Did you have a good experience? Is it a better way to travel?