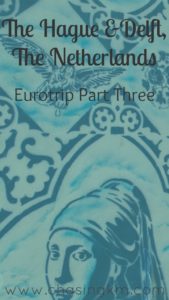 We are finally on the adventure of our life time (up ’till now)! After resigning from our jobs teaching English in South Korea in February, we are traveling through Europe, visiting Paris, Belgium, The Netherlands, Germany, Czech Republic, Poland and Austria. We spent almost a year planning our two month trip to Europe which eventually evolved into a ten month journey that will see us crisscrossing Europe, hopping on over to Ireland and then onto the USA for a few months. Central America may (hopefully) make its way onto our itinerary.

The way we have planned our travel is a combination of hostels, couchsurfing, workaway and friends. This means we get to experience regular life and meet locals in the places we visit as opposed to just being main stream tourists. It also means we can stretch our budget further and travel for longer! We’ve already met lots of people from all over, in Korea and along the way and always appreciate the tips, suggestions and insider information we get. As a result of this we are often adding new places and activities onto our list.

The Hague made its way onto our travel plans due its convenient location on a Flix bus route at an attractive price of just 9€ from Ghent. It was also very close to Delft which was a bucket list town for Kayley to see.

We found a hostel, conveniently called Hostel The Hague, right in the center of the city. This was to date the best hostel we’ve stayed in. First thing in its favor was the free beer on arrival, reception is also the hostel bar. The hostel itself is not huge and it just felt cosy and more personal than some of the big hostels we stayed at in other cities. This was also the first hostel where we met other travelers and spent some time sharing stories about our travels and home countries. Something we had hoped for in a hostel environment.

It being the Netherlands, cycling is super popular, so we decided to rent some bikes and head out to the nearby town of Delft in the morning (about 7km away). Finding two bicycles proved quite a difficult task, apparently when the sun comes out everybody wants a bicycle for the day! Our advice would be to get to the bicycle rentals early in the morning. We had to go to three different places and eventually got one bicycle each from two different outlets. It was worth it in the end though. The cycle from The Hague to Delft was very pleasant. Cycle paths are everywhere and mostly go through scenic suburbs, parks or along the banks of the canals. It is also super flat so nothing to taxing on the legs. The bicycle rental places are also next level, they have parking for your personal bicycle, workshops where you can do your own repairs and some even have coffee shops inside. Bicycles range from 8€ to 10€ per day. 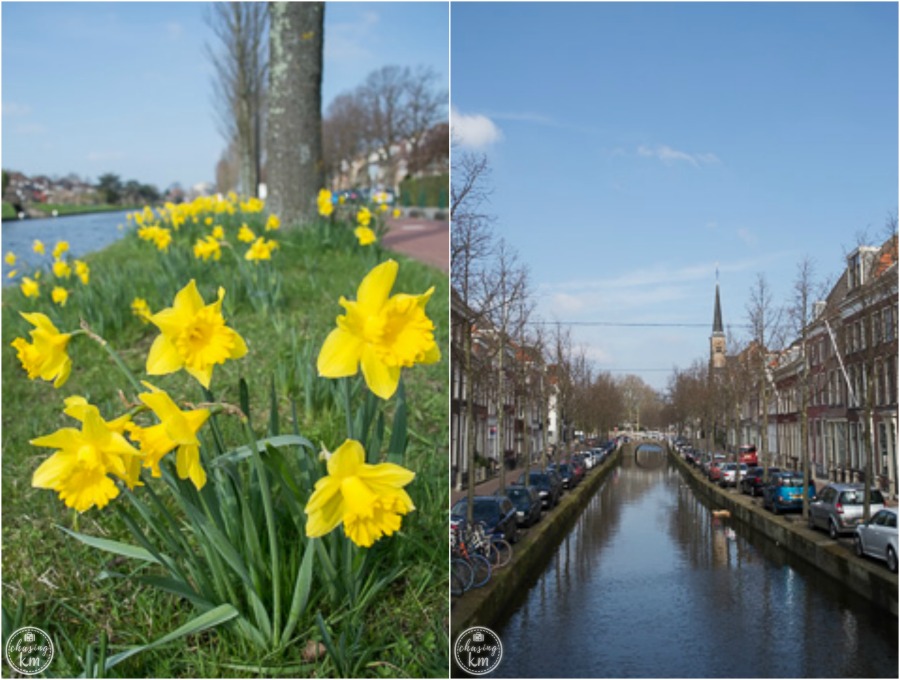 Delft is another of those super quaint little European towns. It is, of course, famous for its pottery/ceramics and for being the home town of Johannes Vermeer, the Dutch painter. Most people picture white pottery with blue painting when thinking of Delftware. In reality it can be painted a multitude of colours. We went to De Delfste Pauw (The Delft Peacock) for a free tour of how the pottery is made. Well worth it if you want to learn more about the process involved. They show you the entire process from clay to finished product and you can watch some local artists at work hand painting the Delftware before it gets glazed in the oven. A big surprise for us was that the distinct blue colour actually starts off black. After it is glazed and baked again the chemical reaction changes the colour to blue. 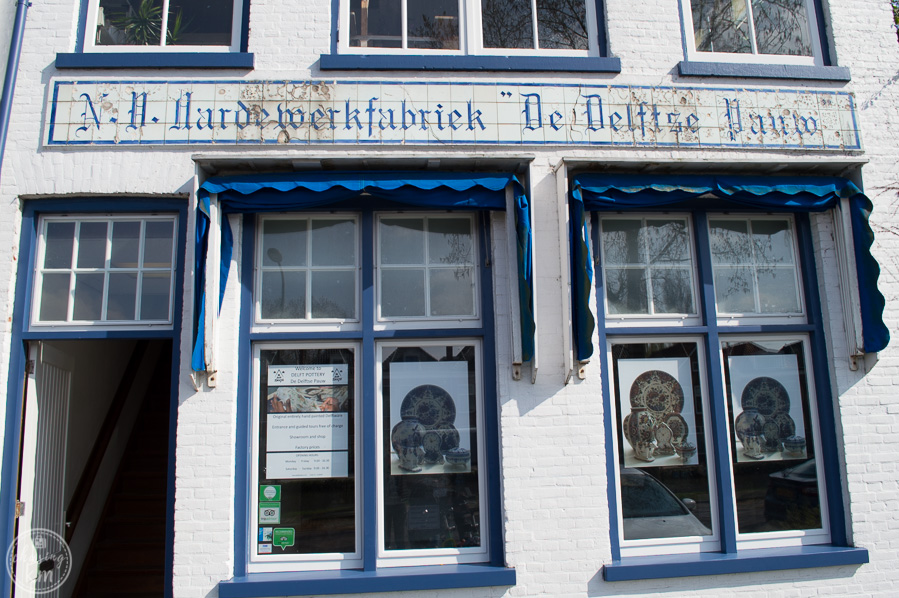 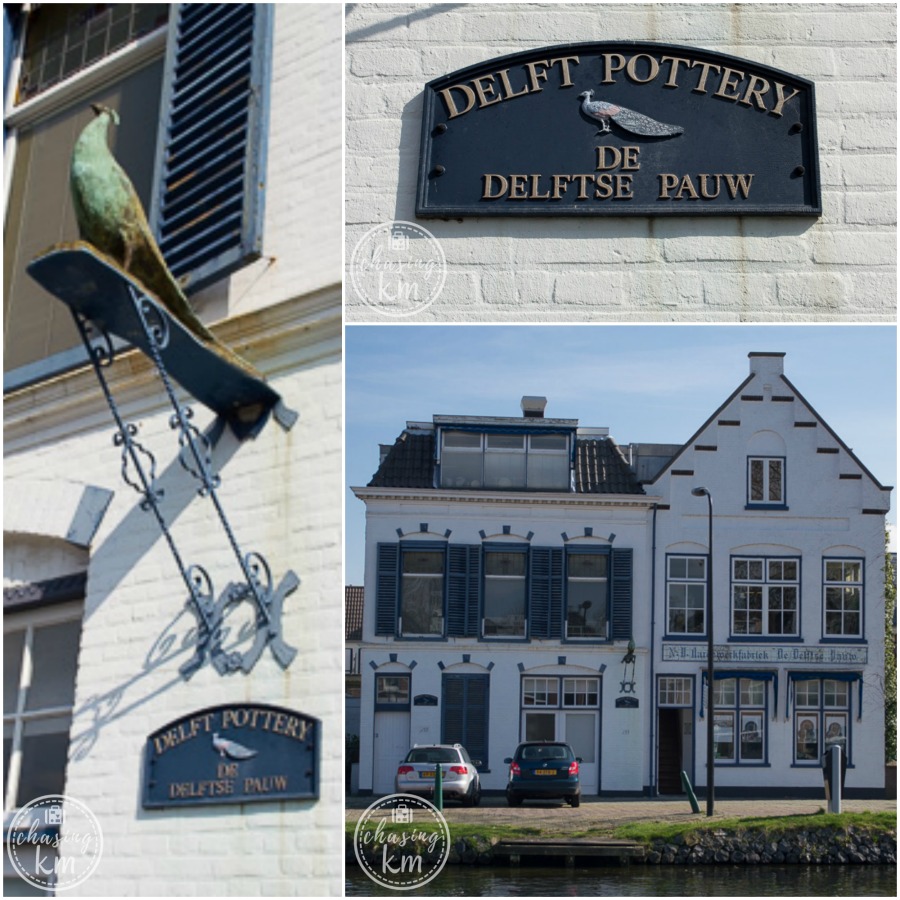 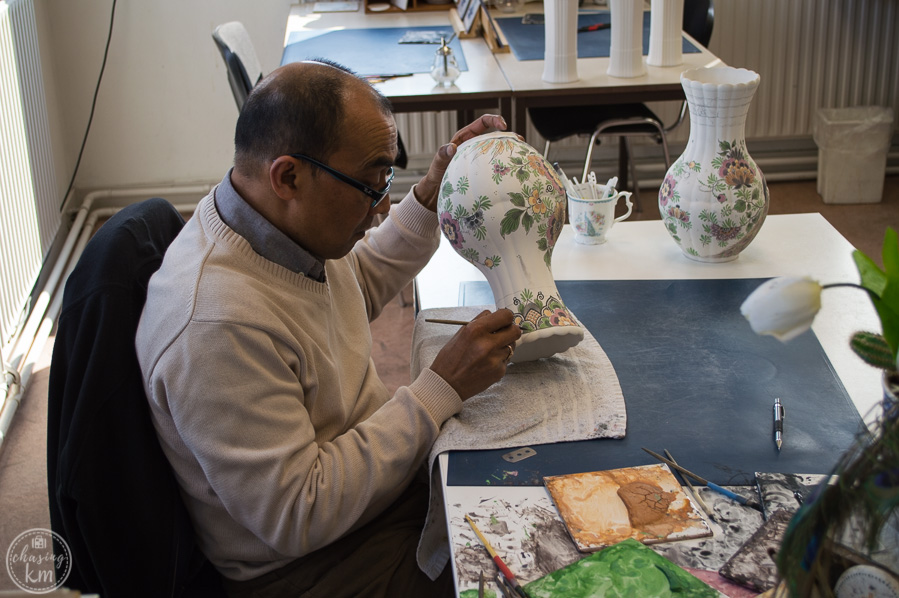 In the center of town we also happened upon a small market. This was a revelation to us as we got to try some local specialities. First of which was ‘kibling’: deep fried fish (cod) nuggets served with a sauce of your choice. Absolutely delicious! We sampled cheeses of all descriptions and even got a short lesson on different cheeses, how they age and change in flavour and what they would be used for – all from a very friendly dutch cheese merchant. Next up we had to try ‘drop’, another dutch specialty. Basically, they are liquorice candies that range from super salty to super sweet. I preferred the salty ones, definitely an acquired taste, while Kayley preferred the sweet ones. Both are worth a try though. 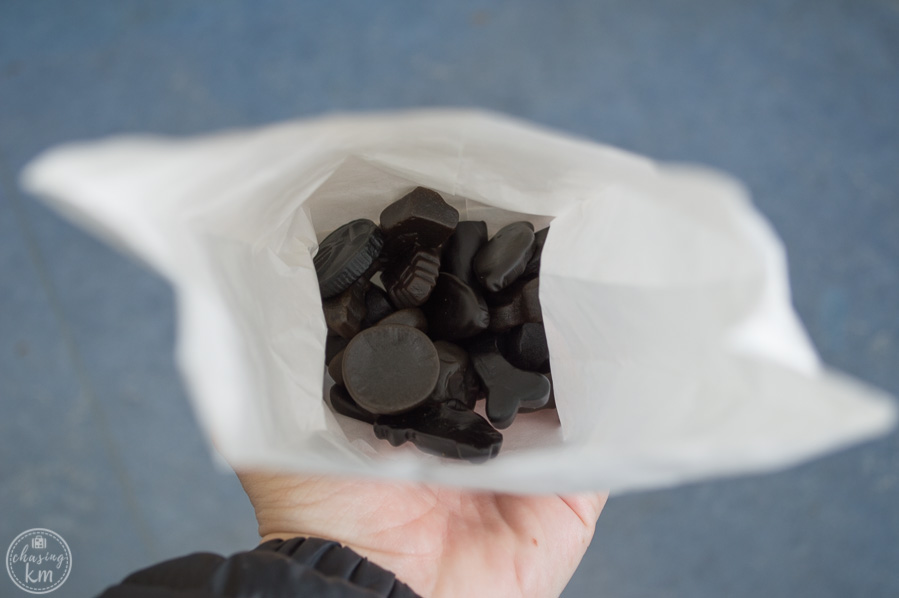 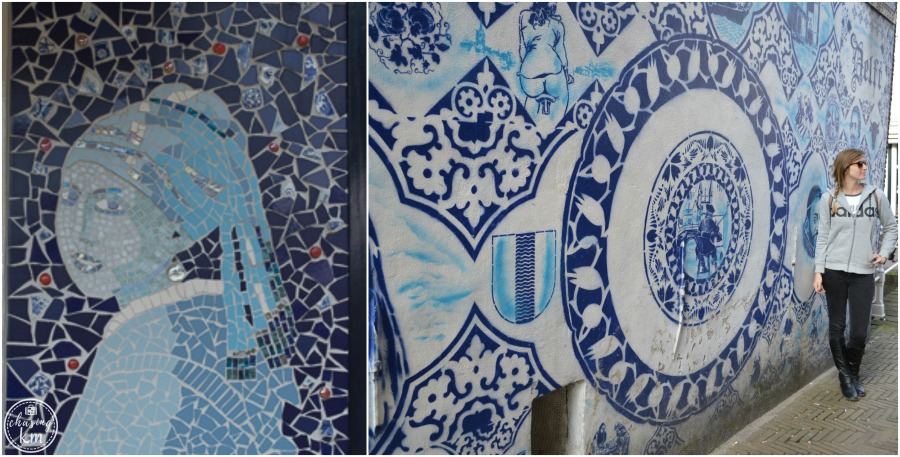 On the way into town we spotted a windmill (de Roos windmill) and detoured a bit on the way back to take some photos of it. Much to our surprise, it was open to the public. It is still a working mill – so you could see the millers inside hoisting up bags of grain to be ground. We were a bit hesitant at first but after ascending level upon level our confidence grew. We went all the way to the top of the mill and onto the outside deck. Here we met an old man who was a windmill tour guide of sorts. He gave us a rundown of how the mill operates and showed us the inner workings off the mill. Apparently windmills make more than just pretty pictures for tourists… 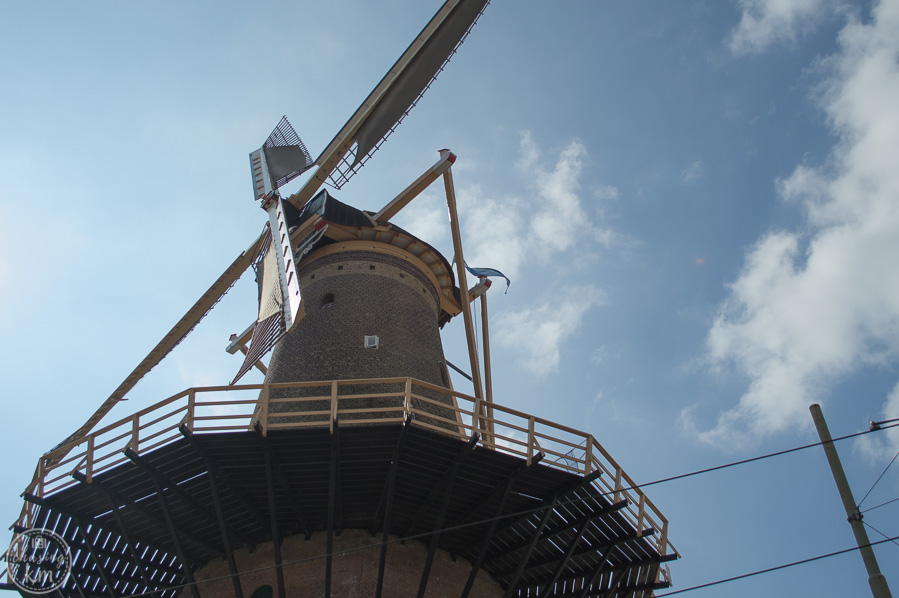 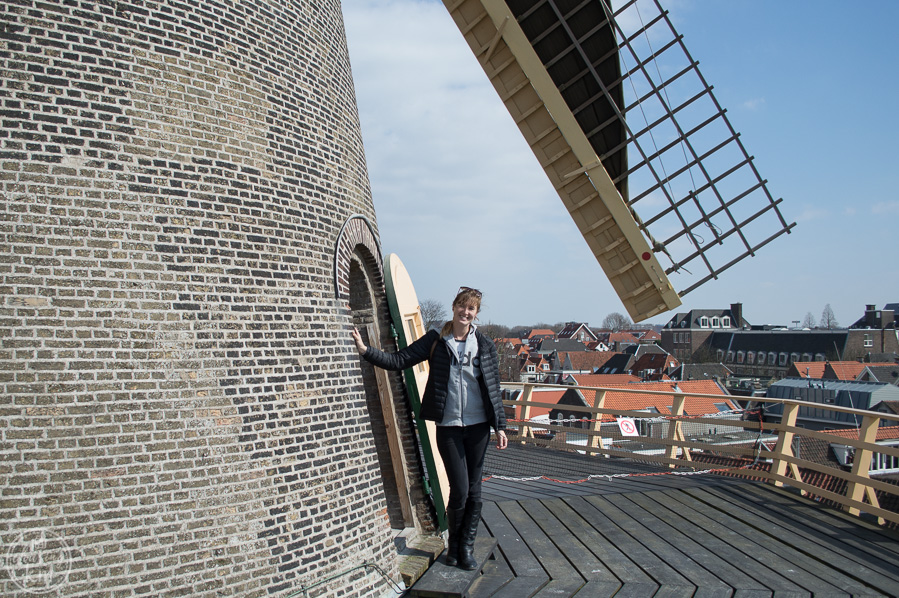 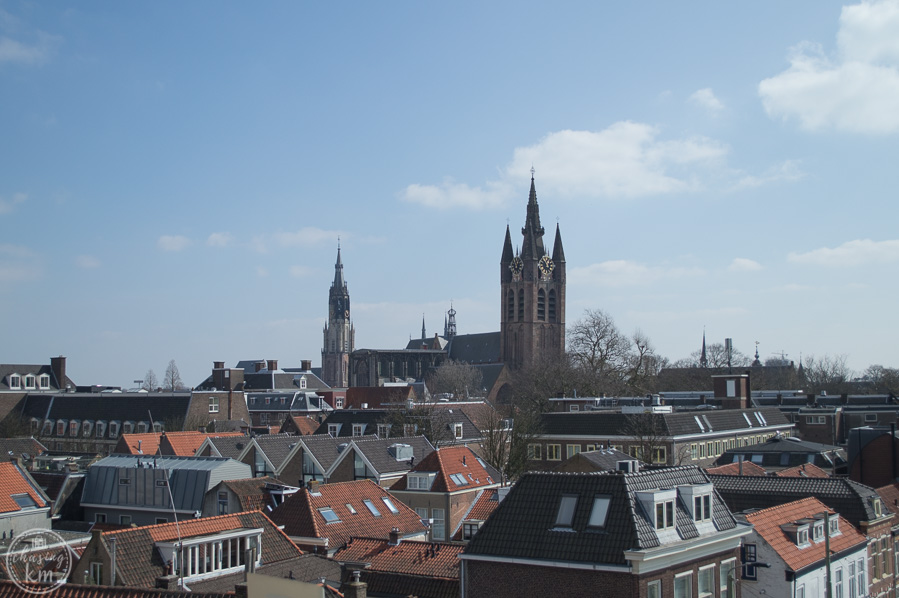 We didn’t spend too much time exploring The Hague itself as we only had half a day there before heading of to Gouda. The Hague has quite a few tourists sites, beaches nearby that draw large crowds in summer, museums galore and, off course, it’s famous for hosting the International Criminal Court. The city hall is also a very impressive white monolith which is open to the public (pro-tip, it has free bathrooms). 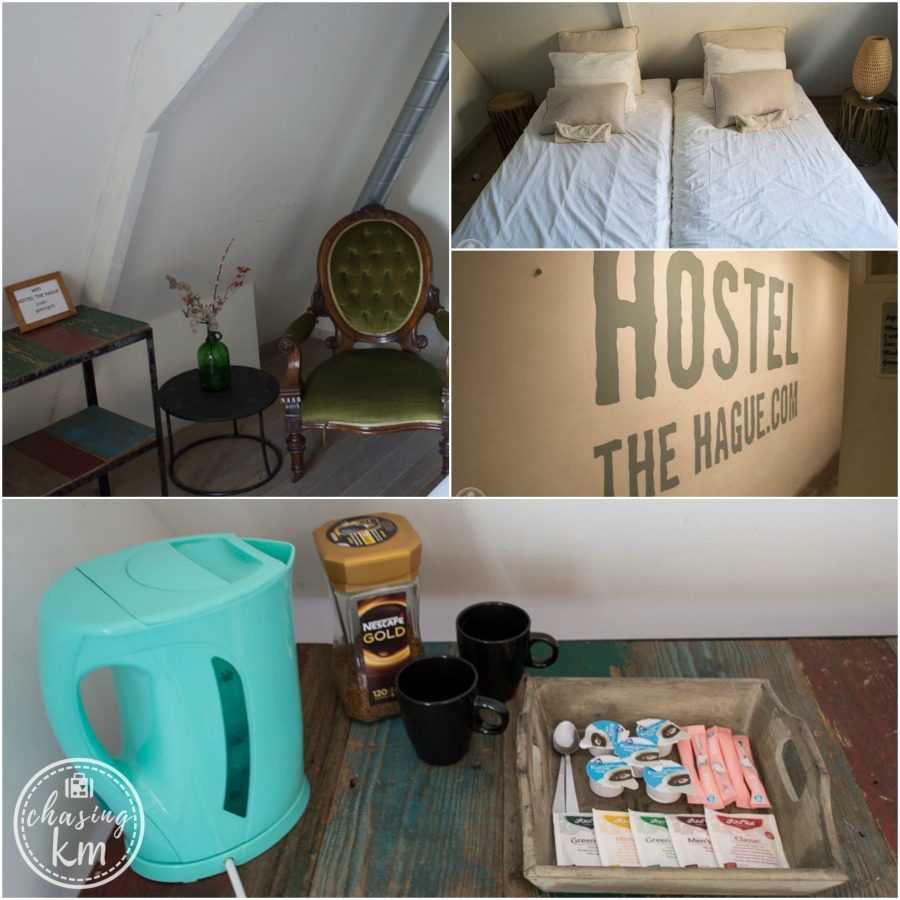 We had a private room with a basin in the room and and a shared bathroom.
Towels were provided as well as coffee/tea and kettle in the room.
The beds were very comfy with fresh, clean linen and lots of pillows.
The kitchen had all the basics to prepare a meal and a fridge to store things. It was quite small, would only hold about 5/6 people.
The hostel bar was reasonably priced and had events on every evening. It does get quite crowded though.
There are a few supermarkets within walking distance, a bicycle rental as well as tram/bus stops. Lots of restaurants, cafes and bars in the area as well. Very central.
We paid for the hostel breakfast in the morning. It was basic but tasty and enough to keep you going for a while. 2€ for a basic and 5€ for the classic option
The staff were all very friendly and helpful.
Bonus: free beer on arrival! It’s a local brew called Lam brewed by De Gekke Geit.

What/where has been your best hostel experience?

9 thoughts on “Eurotrip Part Three – The Hague and Delft, The Netherlands”