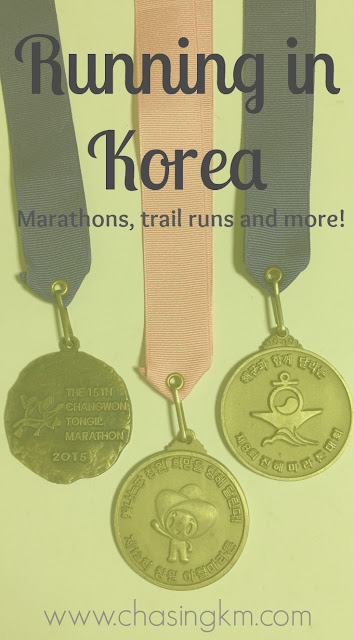 Before I left South Africa I’d become quite hooked on running. Particularly trail running. I had done a number of races of varying distances, some stage races and a few road runs. My highlights being a 3h54 road marathon as well as the 73km Golden Gate Challenge (3 day stage race with some massive climbs). Kayley also did her fair share of running back in SA, she actually convinced me to try my first trail run. She has completed numerous trail runs, many 10kms, as well as a half-marathon.

So I duly packed some running kit with road and trail shoes for our time in Korea.
Running here has definitely not been as easy as back home. I first landed in early spring which is colder than the middle of winter back home. After dealing with the jet lag I did finally manage to drag myself out of bed in the morning for a few runs only to realize I was pretty unprepared to run in the cold! Very soon after that I got the worst case of flu I had ever had in my life! This may or may not have been due to the cold morning runs, or exposure to a new environment and lots of children etc.
I did however, eventually find my feet and settled into a rhythm. I was delighted to find a few trails near my apartment that went up and around the hills as well as some single track through some of the parks. Hiking is a big thing in Korea so this has been great for me as a trail runner. There are trail heads almost everywhere, most have a rough map as well. I have had a few startled glances from the hikers on my morning runs but most of them are very friendly. 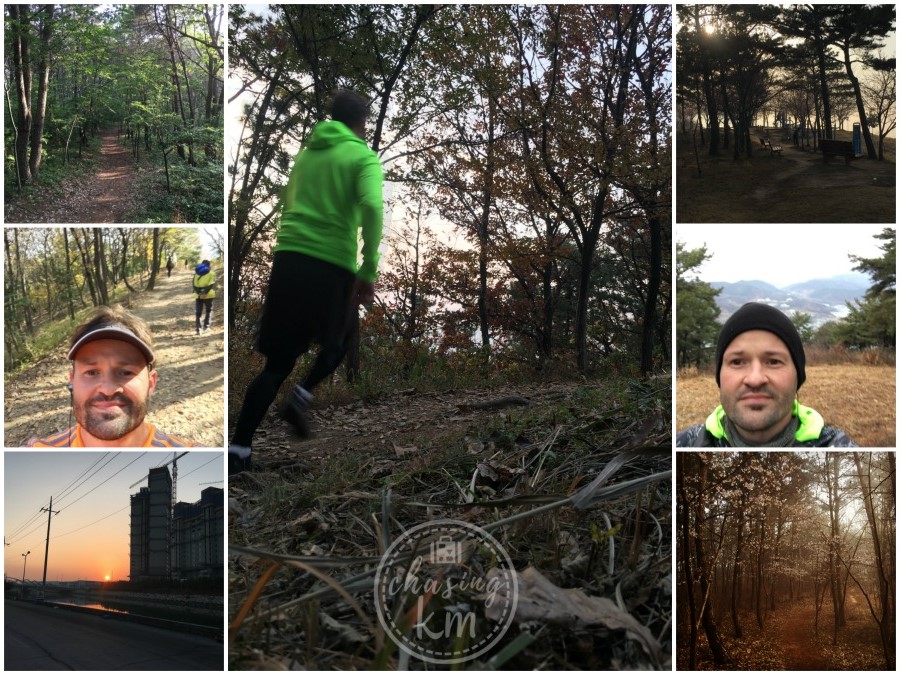 Road runs have also been pretty good to get some mileage in. Most motorists have, surprisingly, been quite courteous when I’m trundling along where there are no pavements.
I have only done two trail races in my time here. Actually, it was one race that I did twice, last year and this year. It is called the Baekyang Challenge and takes place annually in Busan. 26km up and around a mountain. Lots of fun, tough climbs, great single track. This race is organized by a foreigner who lives and works in Busan so entering it is easy! 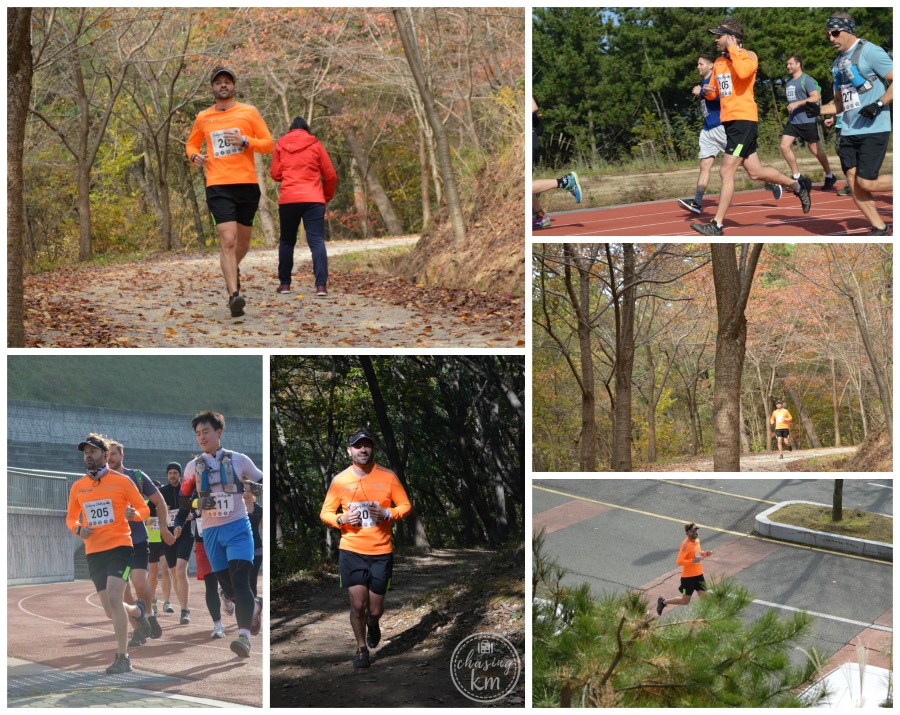 Which brings me to road races in Korea, for these you will need help, unless your Korean skills are good. Mine are not. Kayley and I have done a few 10km races and they have been fun. They are really well organized. You have to enter at least one month before online. Your race number, timing chip and shirt get delivered to you about a week before the race date. So on race day you just pitch up and run. If you get there early enough you can enter a lucky draw to win some prizes, this is done before the race and we’ve seen people gong home with TV’s. This is usually followed by some speeches and then a group warm-up coordinated by some dancers/performers on stage to the beat of K-pop. This is quite a sight to see and is hilarious.

Just before the race starts everyone gets a pep talk and shouts of “fighting” and fists in the air are the norm. Sometimes you will also get a shoulder rub from the person behind you and in theory you should be giving the person in front of you a shoulder rub. Then fireworks (for every event) and you’re off! 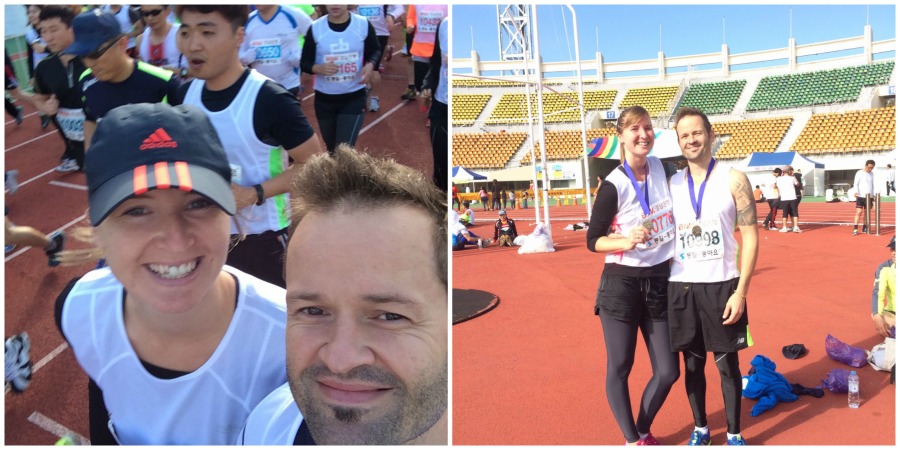 The routes are always well marked, lots of marshals along the way and decently stocked water tables. Timing is spot on as well. After the race you can collect your medal which will come with a small bag of treats. There is also free food served after the run, fishcakes (odang) and tofu. There are also free bag storage facilities at the start/finish and ample parking. Usually within an hour of the race you get a text message with your official time and about a week later they send you a certificate with a photo of you at the finish, race details and time. 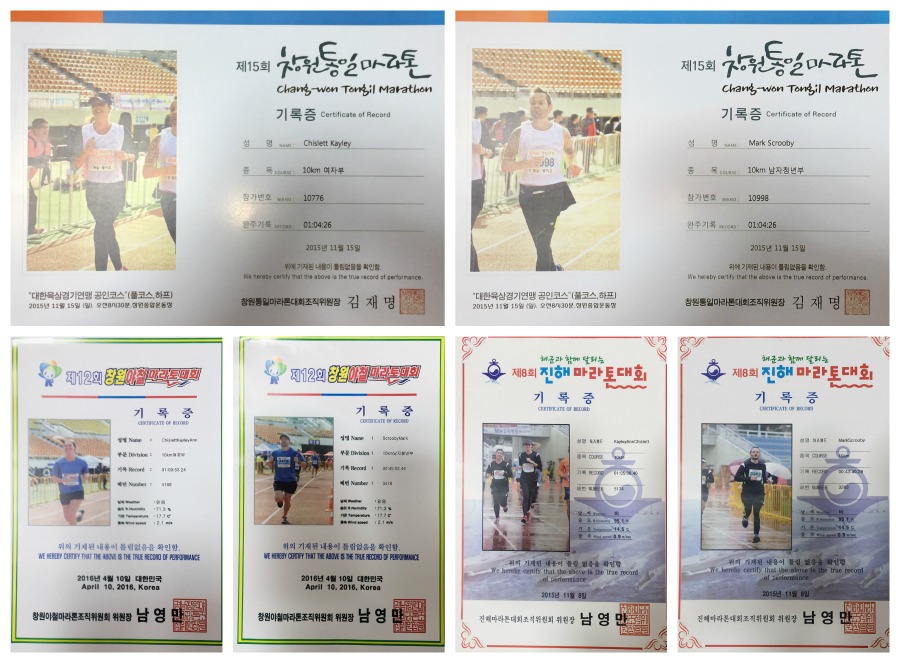 If you are a runner I would definitely recommend trying a race in your area. If you are not a runner I would still recommend doing one just for the experience. There are usually a few events on offer, ranging from 5kms to 42kms. At all the races we’ve attended there has been a very mixed batch of participants. From the super cool, dressed to kill and faster than a speeding bullet pro’s to the loving couple who walk and hold hands and even the first time runner who bolts off, nearly has a heart attack and walks for the rest of the way until he sees the crowds at the finish line type. As foreigners we also get extra cheers and shouts of “Woawaaahhhh”! 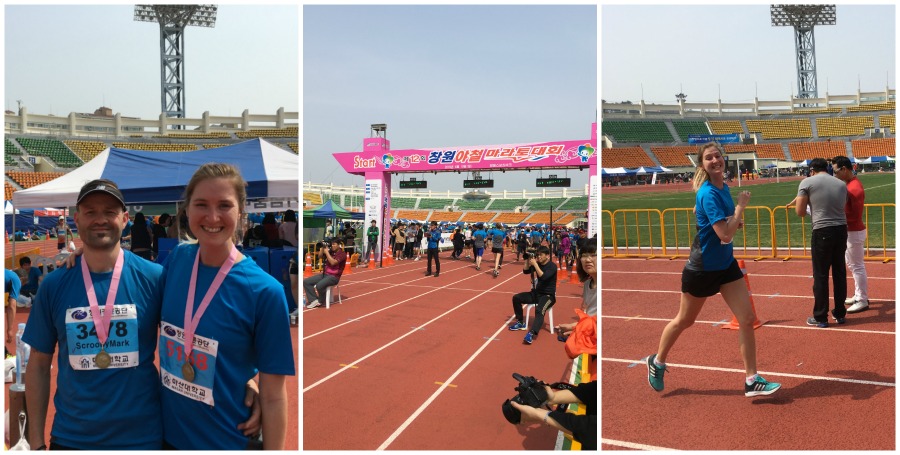 Overall running in Korea has been a positive experience. It is a great way to explore new suburbs and trails. It also, for me at least, is a great time to think and reflect or to just zone out completely and forget about everything else. Another benefit is that it keeps off a few kilograms so you can try more of the delicious food!! This is a constant battle as we love trying all the food in new countries, and have really loved Korean food.

Do you have any running stories to share? Have you tried a race in Korea? Let us know in the comments below!

0 thoughts on “Running in Korea”