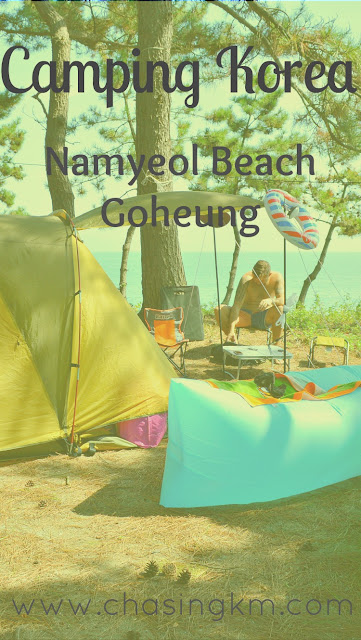 Korea has been blessed with a few things – endless mountains immediately spring to mind. But they also have an incredible number of islands and peninsulas scattered along their coast line. Some of these are absolutely stunning! You could almost believe you were on a tropical beach anywhere else in the world. What better way to enjoy them than with some beach camping?

We had, due to the weather, again, and some prior commitments, missed out on camping on Namyeol beach with a group of friends at the end of summer. After seeing photos from their trip we decided we had to go there. The beach itself is situated near the eastern tip of the Goheung peninsula. Clear blue water, white sandy beach and a backdrop of rice paddies terraced up the hills. 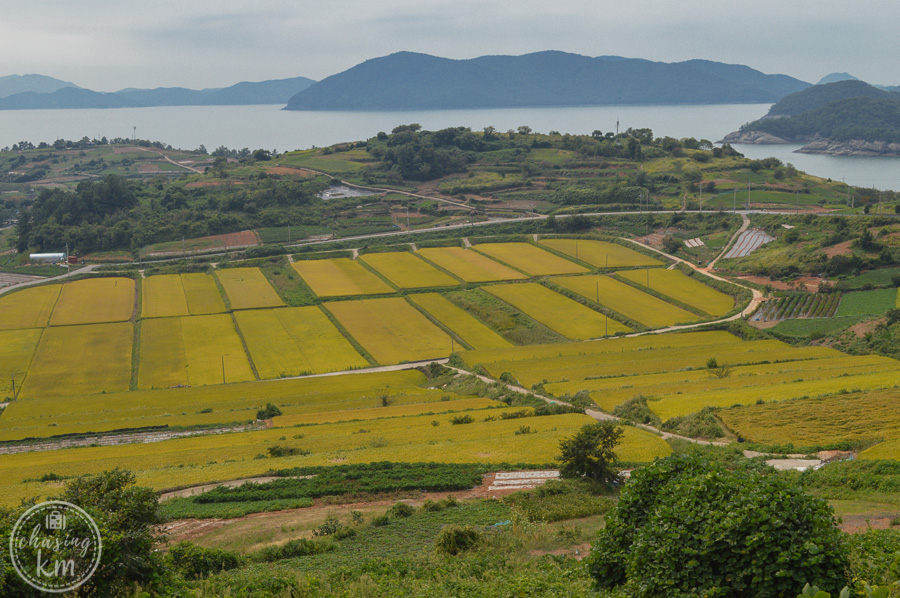 We went there towards the end of September, which is after summer has officially ended in Korea. This means that, even though the weather is still very good (probably better for camping than during the heat of summer) the beaches are almost deserted. Also, what used to be a pay-to-camp stretches of beach are now free. Our best kind of camping! There are still public bathrooms to use as well as a small convenience store to stock up on basics, like ramen and makgeolli. There were showers but they were locked due to the season being over. The outdoor washing up areas had no water. There was, however, a hose outside the bathrooms and some basins in the toilets for basic washing up/brushing teeth etc.

After a bit of scouting around we settled on a spot under the trees at the edge of the beach. Initially the only other people around were a few groups set up in the parking lot itself, tents pitched on the paving stones. Namyeol Beach is also a popular surf spot in Korea and there were a few surfers around (although the waves were pretty intermittent and small). In the summer there are surfboards and wetsuits available for rent if you’re interested in that! 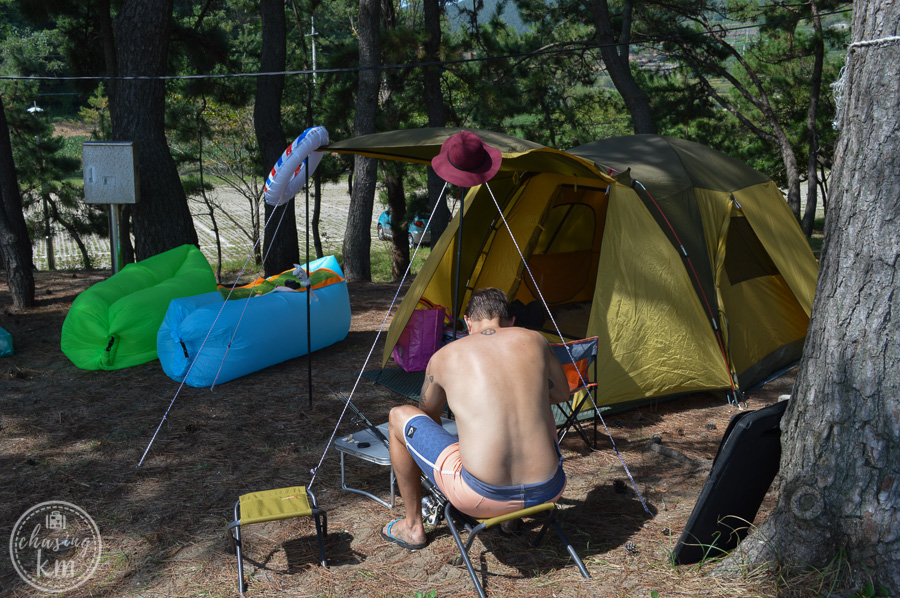 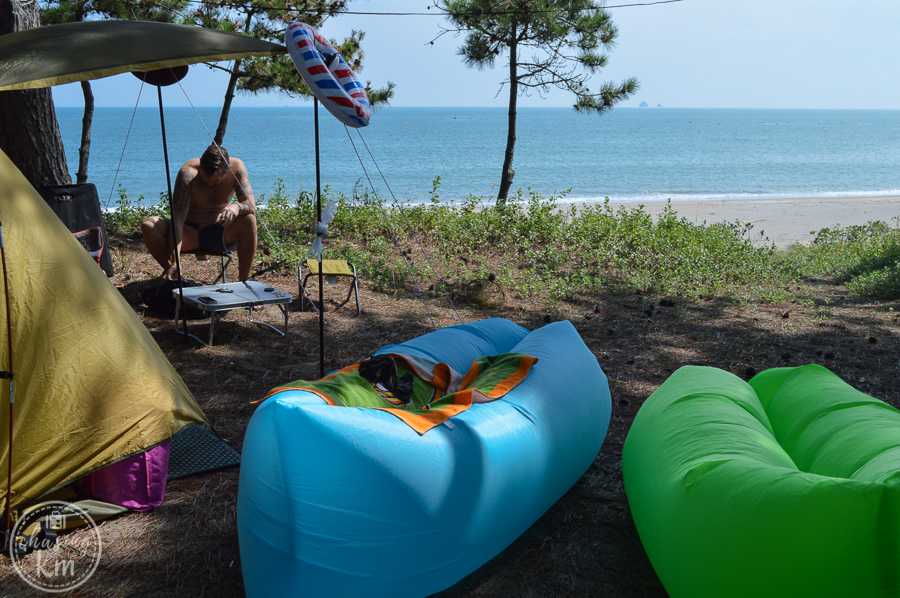 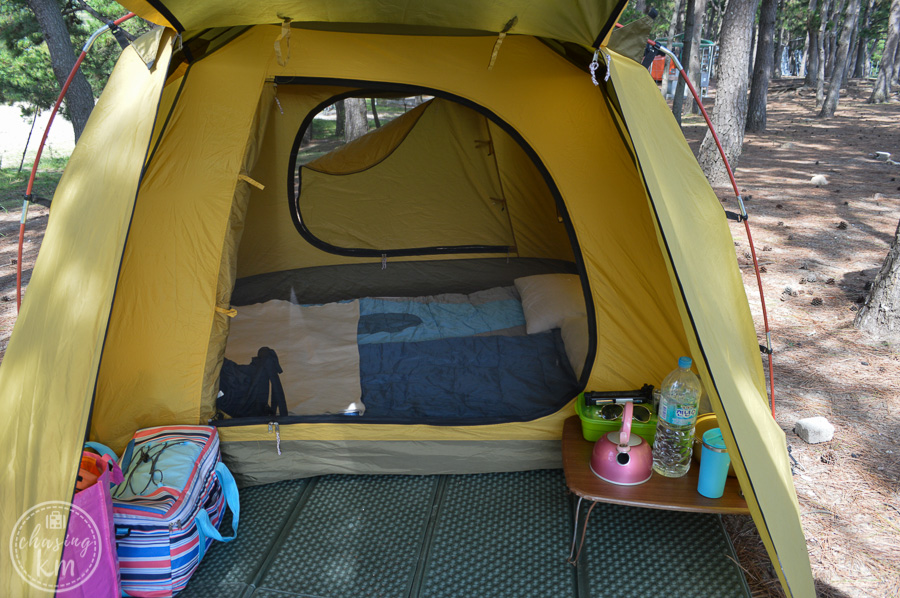 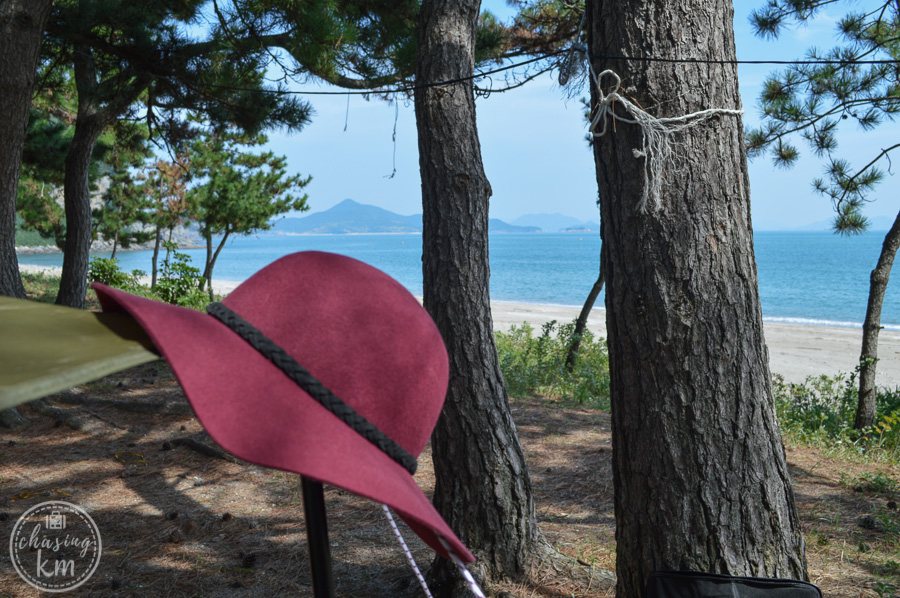 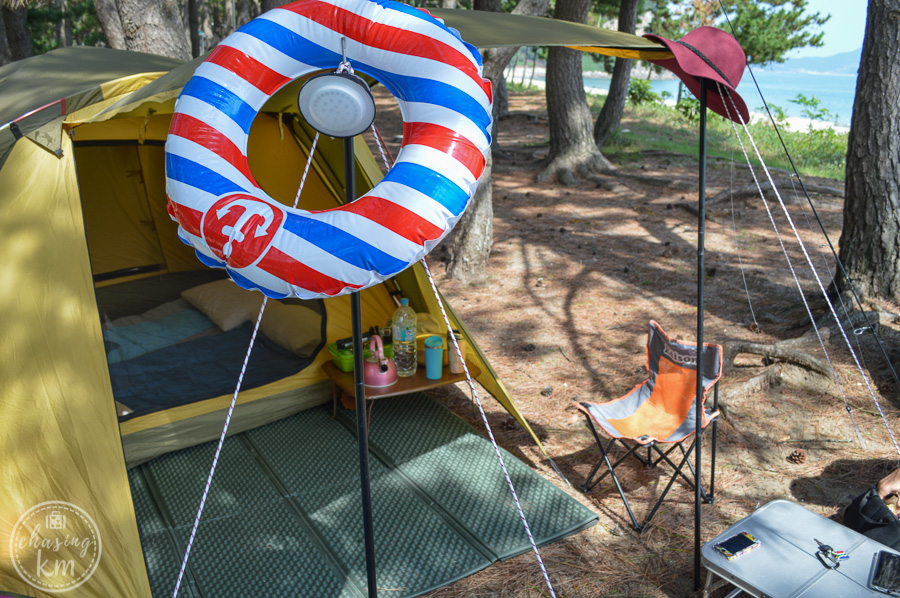 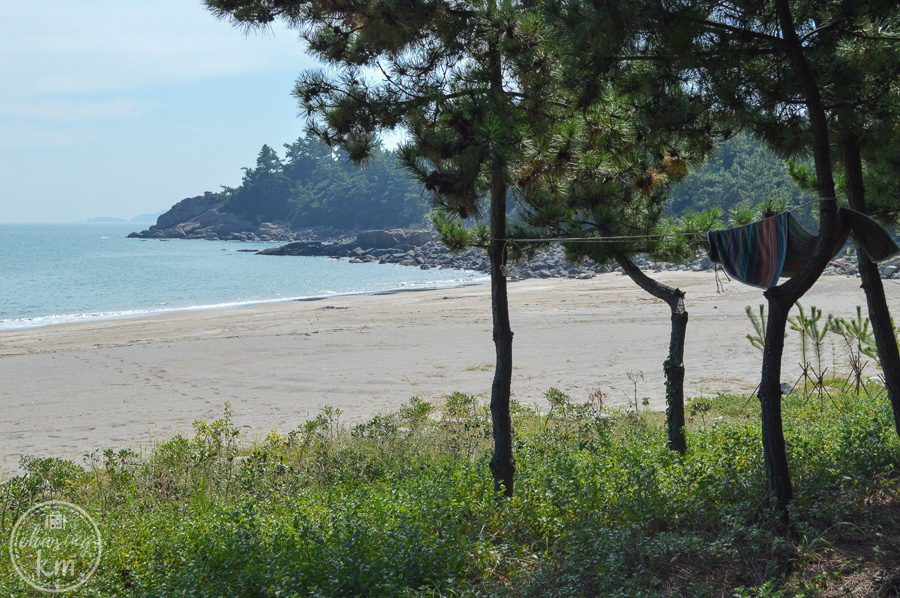 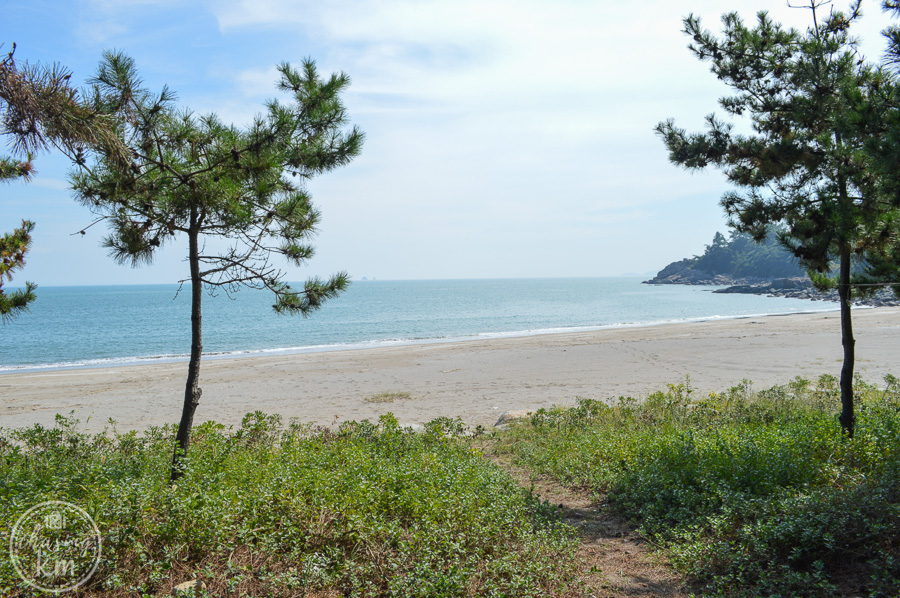 As we had gotten there quite early we had the beach almost to ourselves. Later in the afternoon a few other families set up camp just for the day. A large hiking group came to celebrate their hike, but left as soon as it got dark. We spent the day lounging around on our inflatable “sofas”, sipping on local makgeolli and taking dips in the ocean to cool off.  This led to us hiking up the side of the small cliff next to the bay to watch the sun go down. Excellent idea as it was an absolutely stunning sunset. The beach is also referred to as sunrise beach – they are quite impressive there. If you’re not to keen on waking up early the sunset is a great alternative… 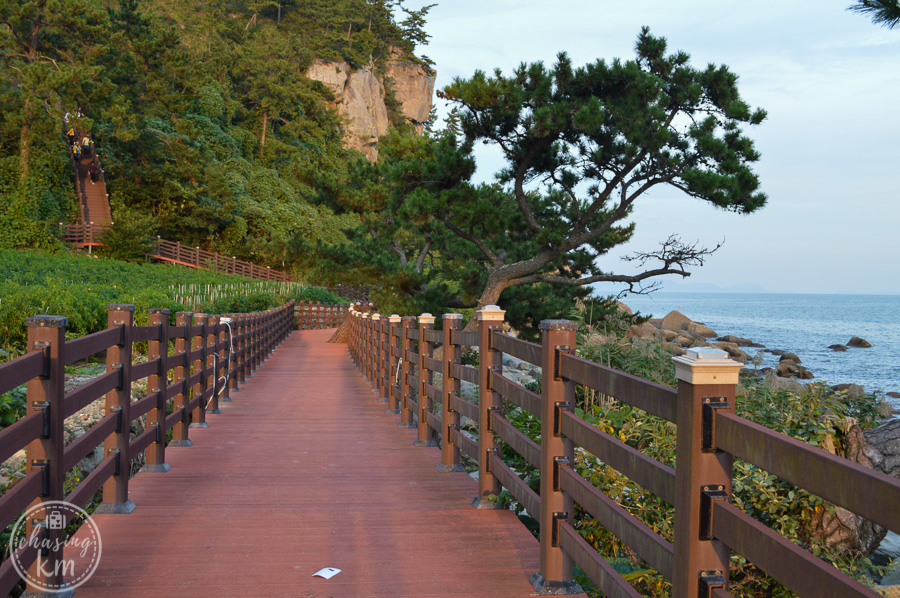 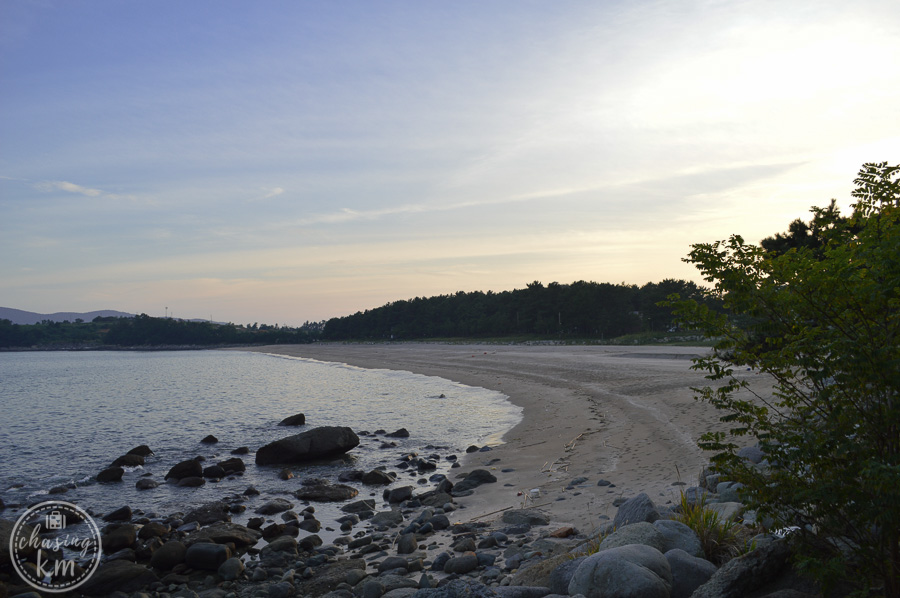 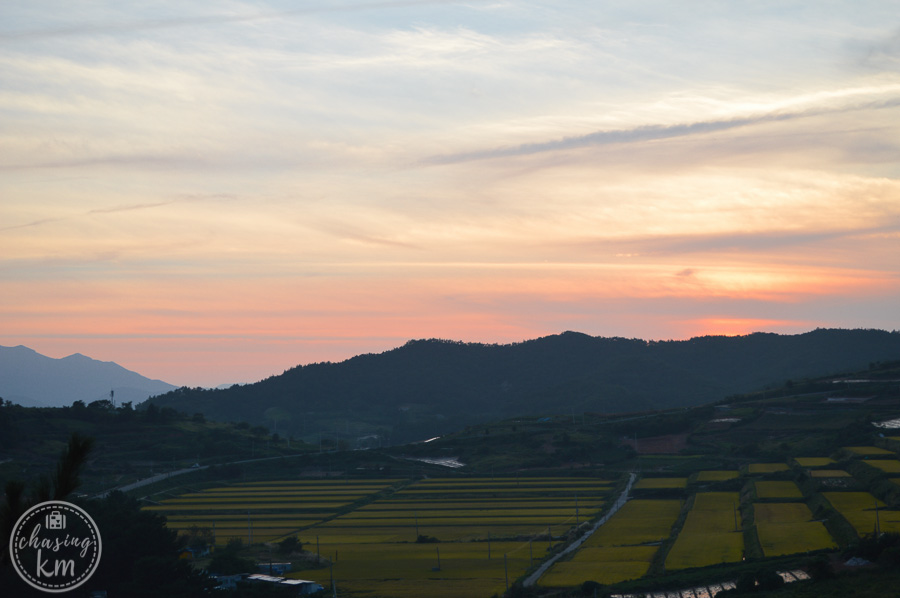 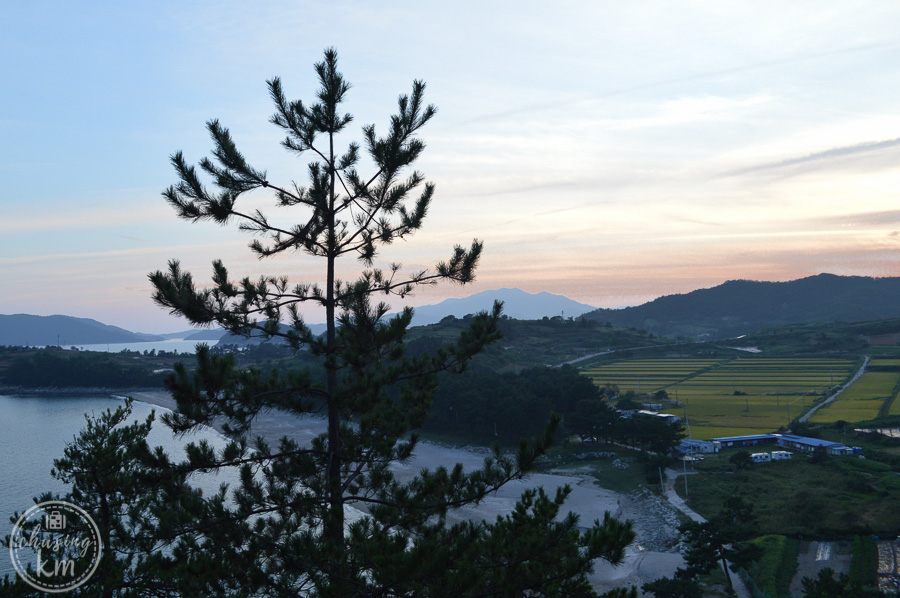 The stunning sunset meant we stayed up there for quite a while drinking in the tranquility (and the makgeolli). We may have spent a bit too long up there, only to realise we hadn’t yet collected firewood for a campfire. Definitely can’t go camping without a campfire! The evening was pleasantly warm and we certainly didn’t need a fire other than for ambiance. A few trips down to beach with torches soon remedied this. Our campfire was soon lit and we were ready for a very lazy dinner of ramen and spam under the stars.

The following morning was spent lazing around again and making friends with somebody’s collie dog. He was super friendly and loved fetching pine cones, even ones we hadn’t thrown. I also tried a bit of fishing of the rocks on the far side of the bay but no luck. We packed up just before lunch and started heading back home. The reason we left early was so that I could try a few dams on the way back to see if they held any fish. This led to an entertaining meeting with a local farmer but, unfortunately, no fish. 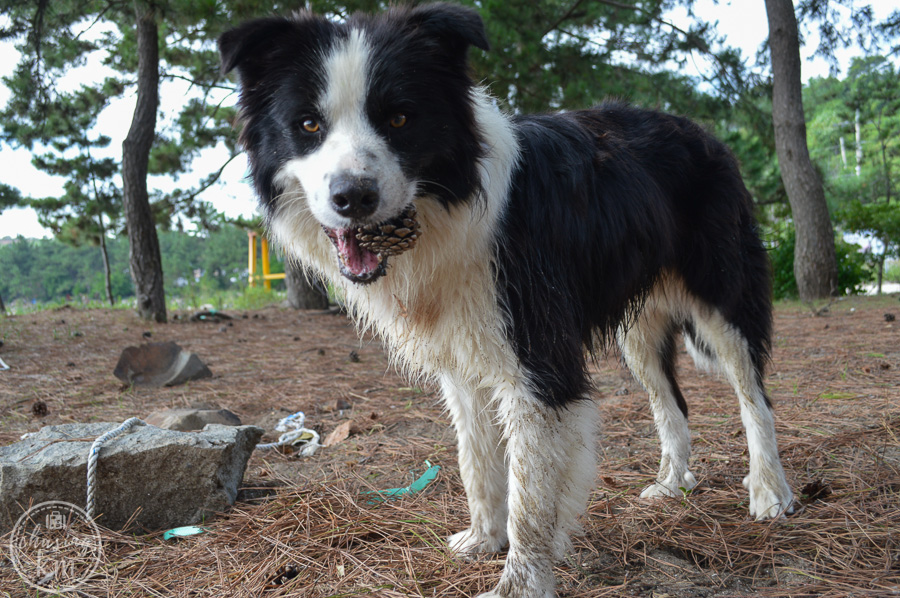 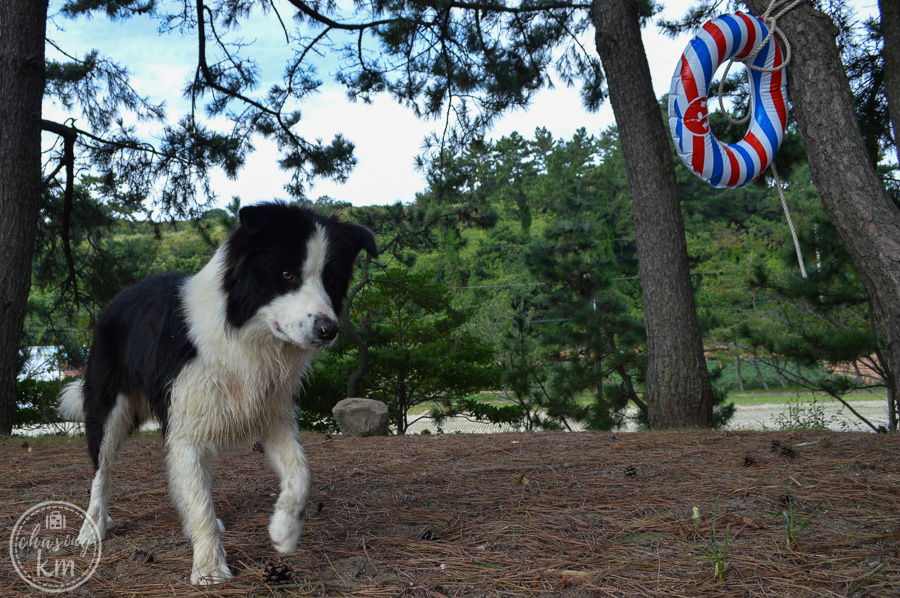 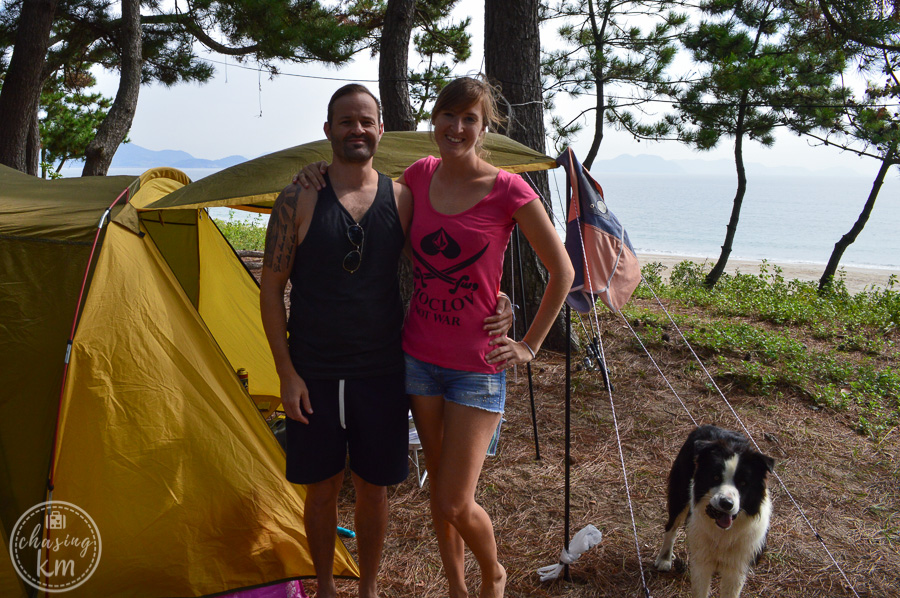 As a beach camping spot this one is great. There are good facilities, even in the off season. The beach is very nice and the water temperature was bearable. There is lots of space to set up and the beach camping is free in the off season. Camp sites in Korea can get very crowded and camp sites on popular beaches even more so!
Has anyone been to Namyeol during the summer, does it get busy? Or has anyone surfed there? Let us know in the comments.

Here’s a quick video of our weekend in Goheung!