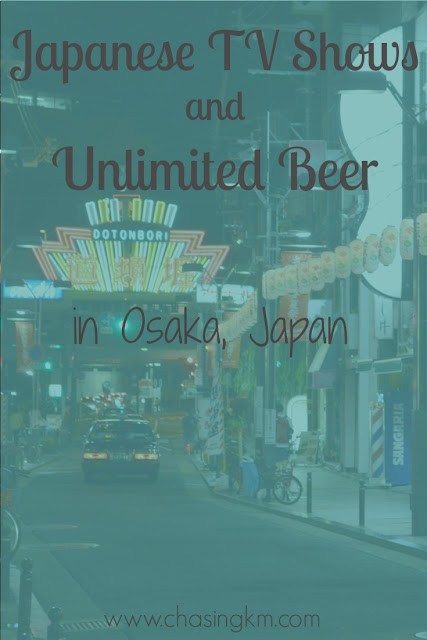 Osaka was our last stop before heading back to Korea. While in Osaka we made use of a 2 day Osaka Amazing Pass which gave us free entry to a lot of attractions and unlimited subway usage. It was definitely worth it and made getting around really simple. We checked into our AirBNB, which was actually a small guesthouse called Guard Guesthouse. We took a walk over to Dotonbori, a famous shopping and food street that runs along a river.


First up we went straight to the river and hopped on board a river cruise! Boy, were we in for a treat when they told us that a Japanese TV show was being filmed on that exact lunch time cruise!They asked if we were okay with it…well of course we were! It was hilarious! These guys were dressed in full black suits with crazy hairstyles and were acting like such silly billy’s! Of course everything was in Japanese, and we sat there with these goofy grins on our faces the entire time. Every now and then they threw out these English words at us. The camera man eventually came and sat with his camera pointed directly at us, the only foreigners on the boat. Who knows if we will make it onto the show or not but it was definitely a crazy experience! 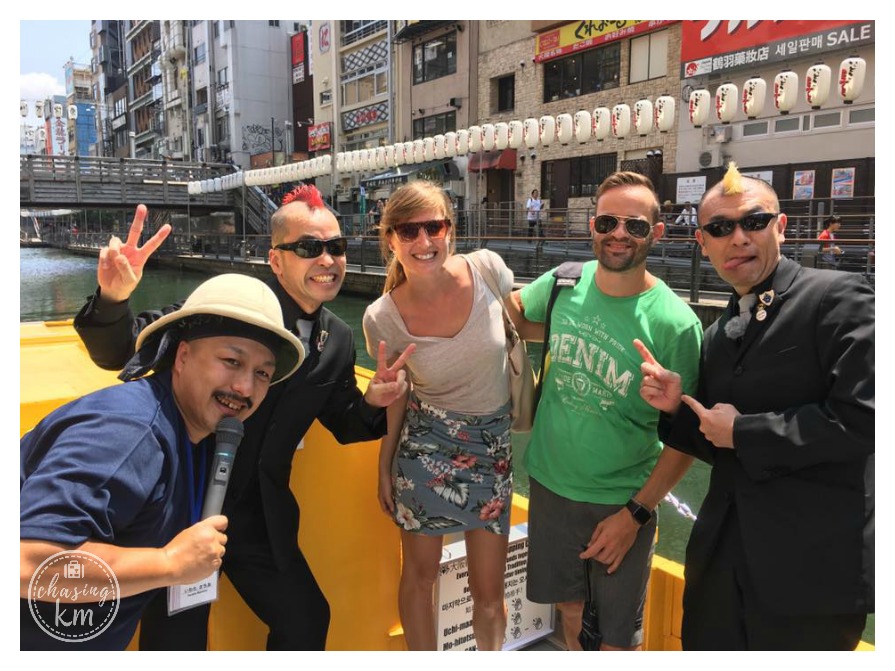 As we were walking away laughing about it, another group of guys came and asked if they could interview us on our experience of Japan! How random? Hopefully we will get to see some of this! We mozzied on over to Umeda and wandered around on the way towards Umeda Sky Building to try catch the sunset, however as we got there the sky turned ominous grey and soon started shooting down some big drops of rain. Our plans of hopping on the Ferris Wheel on top of the HEP 5 shopping mall nearby where also crushed because of the bad weather. We made our way back to our AirBNB for a bit of a rest before hitting Dotonbori again to try ALL THE FOOD! I wish we had taken a video of us tasting everything like our friends Megan and Scott over at BoboandChichi, but I was TOO BUSY ENJOYING IT ALL and Mark found himself some other forms of entertainment…FISHING in a games arcade!! 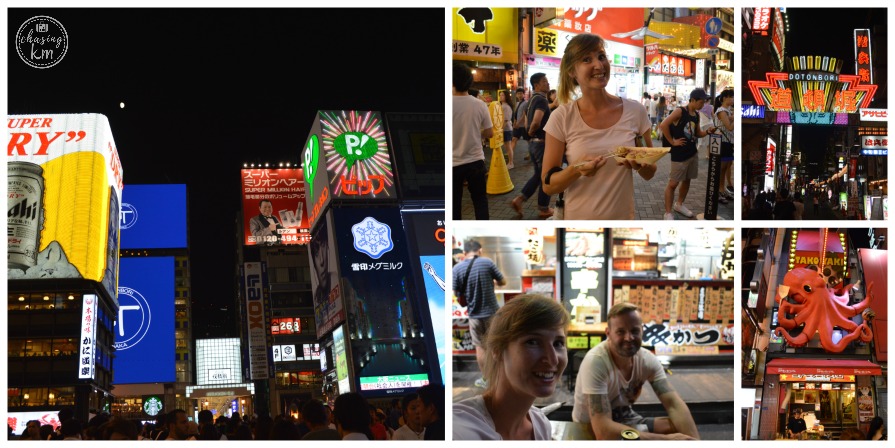 The following day we went straight to the HEP 5 Ferris Wheel and hopped straight on, enjoying our pleasant view of the city. From there we made our way to Suita…why? Because that’s where the Asahi Brewery is located DUHH! First off we went to the wrong entrance, where the security guard asked if we had a reservation for the tour, (obviously we didn’t because we couldn’t call with our phones and the website was in Japanese!). We didn’t take no for an answer though, and walked around to the visitors entrance where we acted oblivious and tried again. But…still no! We begged, we pleaded, and we may have even feigned tears. Still, we didn’t quite believe them that there was no space so we walked in to look at the shop. We stood at the front desk and decided to see what the lady could offer us. All she said was “are you here to look at the shop?” so that’s what we did. Then we walked back to her and asked if there was a possibility of trying some of the beer. Again she asked about reservations and again we tried ever so hard to get our foot in that door. EVENTUALLY some kind man overheard us and checked something on the computer, whispered something to the lady and gave us an information card and said “special service” HOORAY!!! SUCCESS! (See, mom, this “not taking no for an answer” business finally paid off from all that practicing I did on you!). So, we had our brewery tour and as many free, ice cold drafts as we could guzzle down in 20 minutes and then walked back in rather a good mood to the train station. 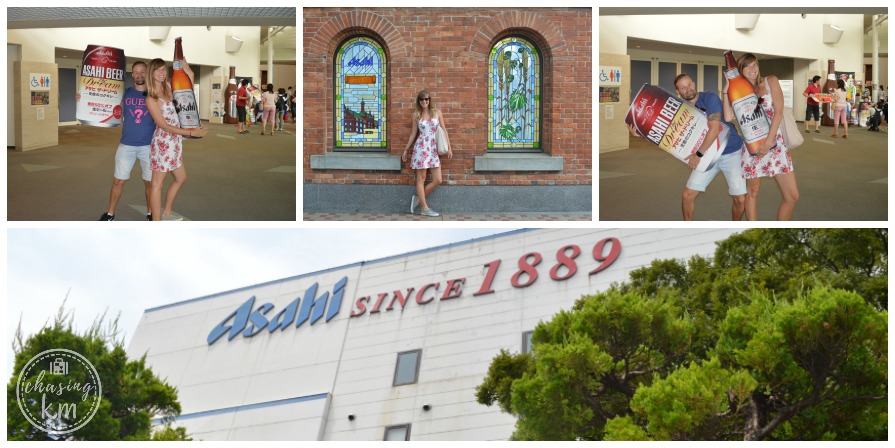 Back in Umeda we went on the hunt for some okonomiyaki, a type of savoury pancake made on the grill with whatever you like in it, plus some octopus shavings on top. Flipping delicious. We finally got up to Umeda Sky Garden (and were a little disappointed to find no actual garden). The sunset over the river and the views of the city were great!

We really loved Dotonbori, mainly for the food and lights and bustling-ness of the city! Umeda, however, made me feel a little nauseous as we kept getting lost inside Umeda station!! I don’t know how, but the two or three times we found ourselves there we just couldn’t seem to get out. It really didnt help that our google maps went crazy because of all the railway lines connecting there! Have you been to Osaka? What was your impression of Umeda Station? Are we the only ones to have felt this way??