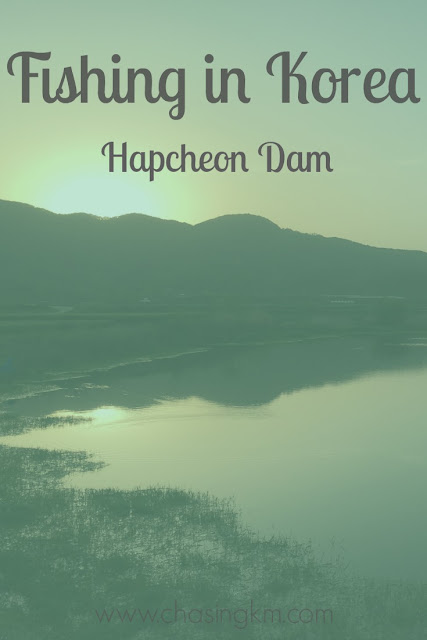 As mentioned in a previous post I met and became friends with a Korean bass fisherman. His name is Son and he has become a good friend as well as given me loads of advice and tips on how to catch more fish.
My first trip with him was to go bass fishing in Hapcheon, which is inland from Changwon, about 90 minutes by car from Jinhae. Son’s father retired out there on a small-holding and Son visits him almost every weekend. The first I’d heard of this area was when Son saw me at the Ungcheon dam flailing away and catching nothing. He told me about this magic place where him and a friend had recently caught nearly 50 fish in one outing and he had photos to prove it!

I half jokingly asked him to take me bass fishing in Hapcheon when he went again. I was quite surprised to receive a message later that week asking if I was free on Sunday to go bass fishing in Hapcheon. I had to cancel plans with my girlfriend (now she’s my wife) but the trip was worth it!
I was a bit hesitant at first as we barely knew each other and I was in a strange country and couldn’t speak the language (still can’t apart from a few words here and there). But it all turned out well. We were joined on the day by another Korean fisherman I had met at the same time. We got through it with some broken English, sign language and my limited Korean. Definitely one of my most memorable days in south Korea.

I have pinned a location below, most of the dams in this area are fishable. Bass, bluegill and even snakehead in some. The one closest to the pin has been the most consistent and is the biggest in the area. It’s with driving around the area and investigating any of the dams you see.

We set off at about 7:30 am and hit the first dam just after 9. It was late spring so the weather was great. I caught nothing for the first 2 hours and I could see Son was getting worried after telling me amazing stories about this place. He was giving me lures to use, pointing out all the spots where he had caught fish and let me have the prime areas first. I did however, eventually hook into a very decent bass and ended up with 8 fish by the end of the day.
We had fished in 5 dams all pretty close together and bass were caught in all of them. Biggest pushing 40cm.

It was but the first of many

I have subsequently been back there many times with my biggest haul being 20 fish in one day’s fishing.
As mentioned in other posts all these dams are also irrigation dams. They suffer the same dramatic fluctuations in water levels during the planting season.
One trip out there we found all the dams to be almost empty or completely empty. We had to drive around for hours looking for a decent spot to fish. This led to us discovering a very strange fishing spot. My biggest in Korea was caught here.
Mark Scrooby