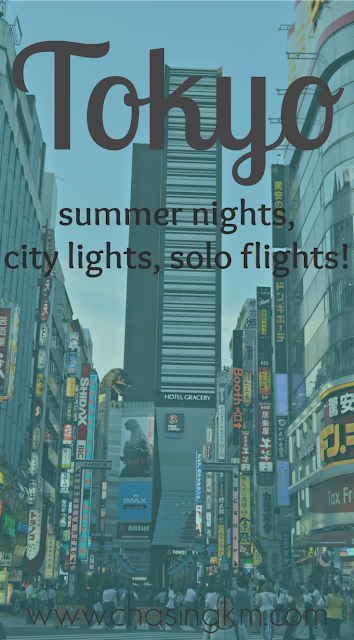 YAY Summer Vacation! Off we went to spend the next few weeks in Japan. Our trip took us through Tokyo, Okinawa, Nara, Kyoto, Himeji and Osaka. I flew out a few days earlier as Mark still had to work till the end of the week. I headed to Tokyo where I spent a few days seeing the sights, enjoying the city life and enduring the sweltering heat. This trip meant so much to me…. It was my first solo vacation.

Now, I have travelled on my own before, both to live in the USA, visit my brother in London on my way back to South Africa, and again when we moved to Korea (and Mark only followed two weeks later) but this was different. This was a planned holiday, where I decided I wanted to go visit a new city and was happy to do so all alone. I definitely felt like it was a rite of passage in this travelling adventure of a life I find myself in. I was enthralled and excited, nervous and anxious, and maybe even somewhat smug (especially when my coworkers told me how brave and daring I was).

Early that morning, Mark dropped me off at the bus station where I waited for the airport bus. I arrived in the afternoon at Tokyo Narita airport (and very nearly missed the train I had booked a ticket for because I left one of my belongings at a counter somewhere). My hostel “Irori Nihonbashi Hostel and Kitchen” was pretty easy to find as I had bought a sim card online prior to leaving Korea and picked it up at the post office in the airport. I used Sakura Mobile and got a LTE sim card with 500MB data. It cost JPY1890 for 15 days. Not the cheapest in the world but the option that suited me best with regards to collection and delivery etc. I can’t complain about the service at all.

After settling in I went to Asakusa to check out Sensoji Temple and the shopping street just in front of it. Unfortunately all the stalls were closed already so I hung out around the shrine for a bit and went to get myself some dinner. Not feeling so brave yet (and maybe feeling a bit lonely) I went into Denny’s and ordered some chicken and spinach and a glass of wine…hahaha! If I only knew how much I would love Japanese food in the days to follow, I never would have wasted money and an eating opportunity on that! Back at the hostel, I stayed in a 22 sleeper female dormitory, each bunk was equipped with a double shelf (one fit my bag on perfectly), a lamp, two plug points, and all round black out curtains. It was clean, quiet and comfortable!

On my first day in the city, I met up with a lovely Japanese girl that I had been speaking to online a few weeks before. We went for a traditional Japanese lunch of some kind of fish cooked in a soy sauce and she gave me so many ideas about what to do. She even showed me to the hedgehog cafe that I’d been planning on visiting and called ahead to make an appointment for me.

Said hedgehog cafe was super cute and the staff were really serious about people treating the little critters nicely so that was good, but the damn little hedgie peed on my white dress after 5 minutes when I’d already paid for 30! 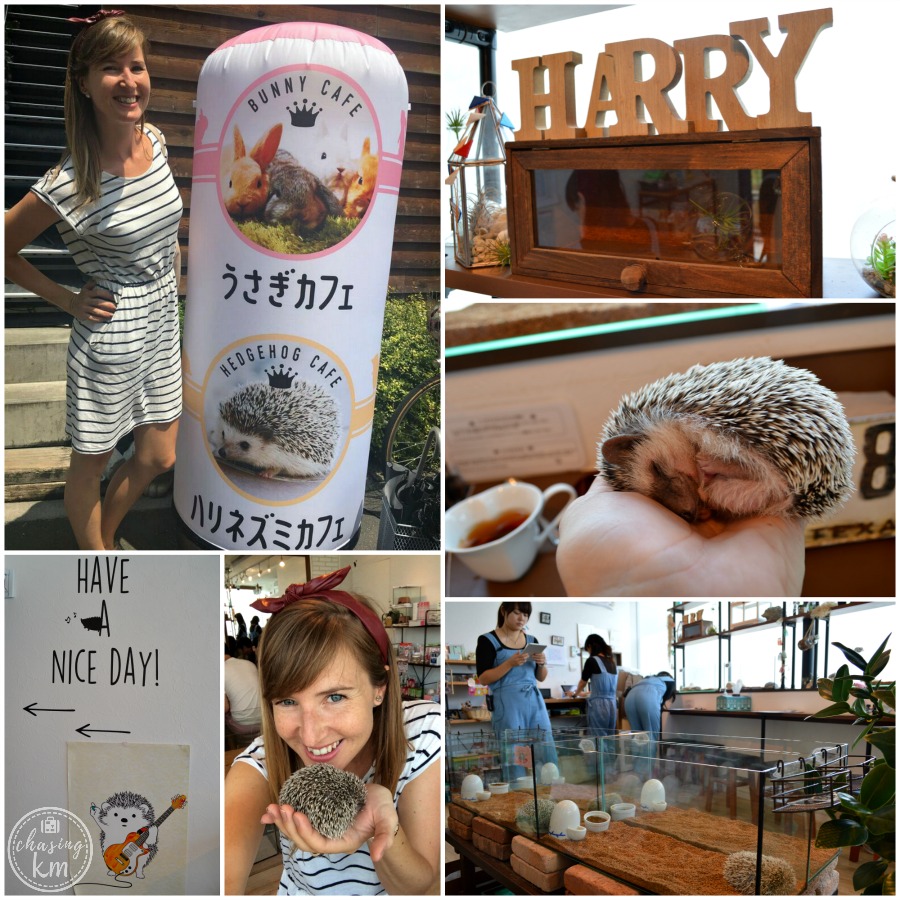 Conveniently, our friends Ed and Bianca were also in Japan for summer vacation! Mine and their time in Tokyo overlapped somewhat. I managed to meet up with them for a day or two where we were able to see some sights together. I saw multiple gorgeous shrines and temples (the architectural style differs so much between each Asian country). Without too much effort, I caught glimpses of Tokyo Tower and Tokyo Skytree, two iconic towers strutting into the skyline of Tokyo. 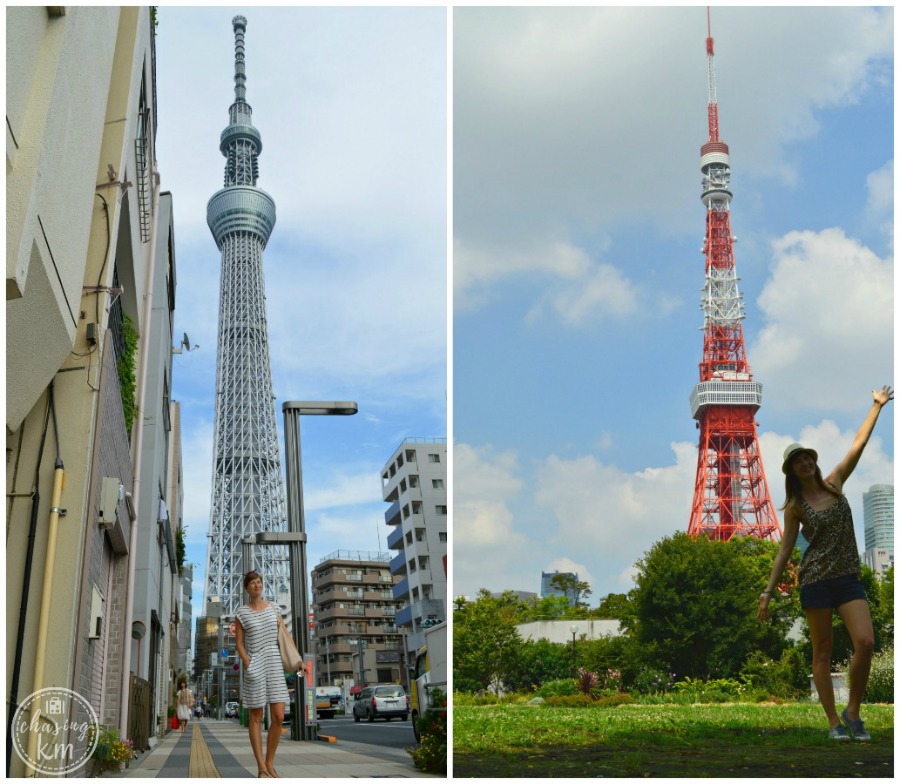 Japan is known for its quirky little cafes (as we have experienced in Korea somewhat), so when we happened upon this maid cafe we were intrigued. In we went for the most bizarre experience. It was cute and all, but I think our impression was skewed by the old man sitting alone at the table next to us sipping his tea and paying for shows – shows that entitled him to 2 glow sticks and a dance on stage by these cutesie young ladies, all while he thrashed his glow sticks around in the air. Every time we ordered something or to get the waitresses attention we had to spew some cutesie noises and actions around, it was a little awkward! But hey, its all about experience, right?

A few months before going to Japan I started playing this “game” on my phone called Neko Atsume. It’s a Japanese game where you wait for cats to come visit your home and they pay you in fish (silver or gold), which you can use to buy food, toys for the cats and to remodel you house. It’s weird, I know, but until somebody gets me a cat, this will have to do. Anyway, I nearly died of excitement when I spotted the claw machines and gumball machines with my Neko characters in them…maybe I spent a small fortune each time, but I now also have my very own Snowball, Peaches and Breezy sleeping on hamburger cushions and climbing on cafe rooftops!

One of my favourite things about Japan was these Purikura photo booths…I don’t know what it is but they make me severely excited every time I see them. I forced my friends Ed and Bee to join me and we giggled profusely at the outcome. These photo booths take pictures and turn you into the traditionally Asian idea of beauty – that is, big eyes, skinny faces, matte white skin and long legs. I guess because we already have longish legs and wider eyes, us western folk tend to look hilarious(ly cute). Anyway, we had lots of fun and I even went further and got some on my own!

Shibuya Crossing is said to be the world’s busiest crossing. It is otherwise known as Shibuya Scramble, where the traffic lights turn red for all cars and allows pedestrians to cross the intersection over 8 pedestrian crossings. Traffic literally halts for throbbing masses of people to scramble across to the other side. The view from Starbucks on the 2nd floor allows you a glimpse at the sheer craziness of it all. 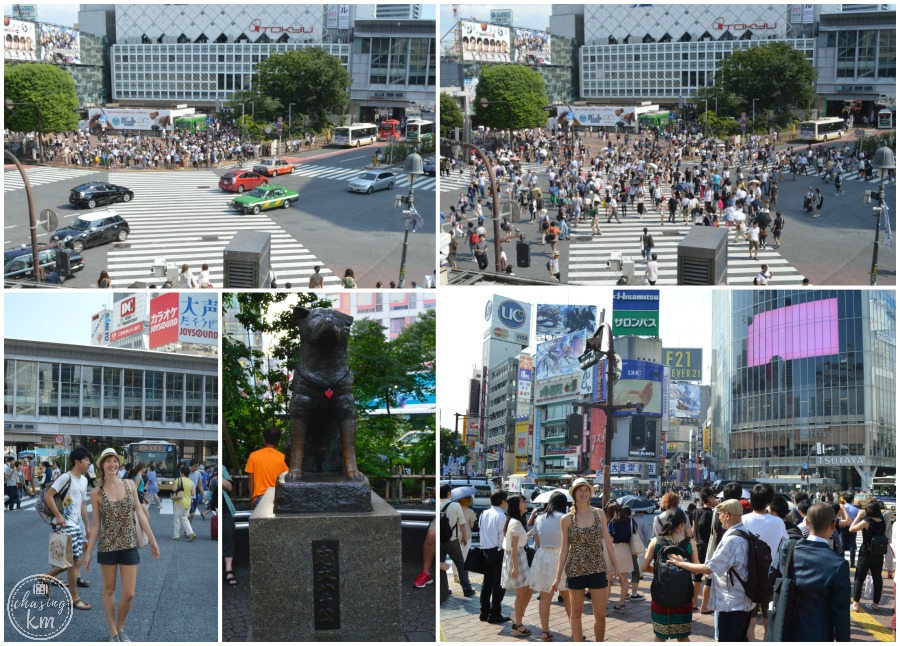 After walking around in the heat all morning, we had our first sushi lunch. A popular spot. as we waited outside this sushi shop for 20 minutes. I stuffed my tummy full of all sorts of sushi at an automated sushi spot – Genki Sushi. You sit at a bar type seat, with a little computer screen in front of you, some condiments and a tap with hot water for your matcha (green tea powder drink), select what you want and it gets delivered on the belt right up to you! Too much fun, I just kept selecting things and watching them arrive and ended up ordering way too much! 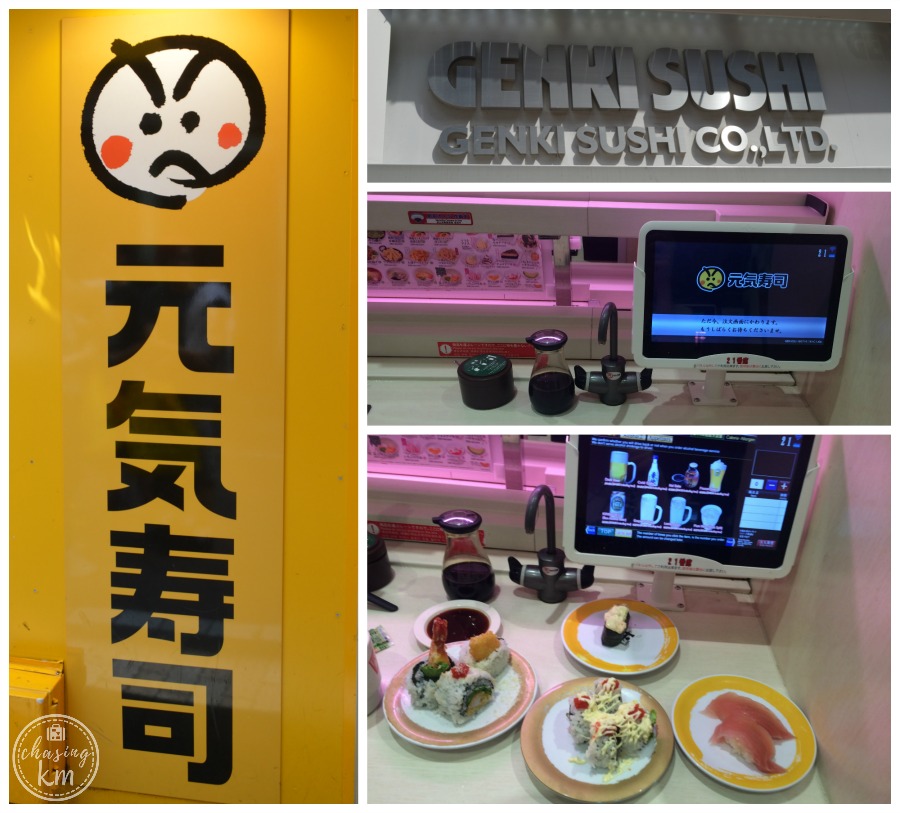 But four days in a city is just three days too many for me, so by the last day, I jumped on a train to the beach. I followed the train for an hour to the end of the line to a quaint little seaside town. The almost excruciating 10 minute walk in the sweltering heat to the beach was dealt with by thinking of my dip in the ocean that awaited me…. The water was horrendously warm though, so it wasn’t much of an escape from the scorching sun and humidity. I spent the day in the sun at Zushi beach, with the hopes of seeing Mount Fuji in the distance. However, no such luck with the cloud cover at that time of year. 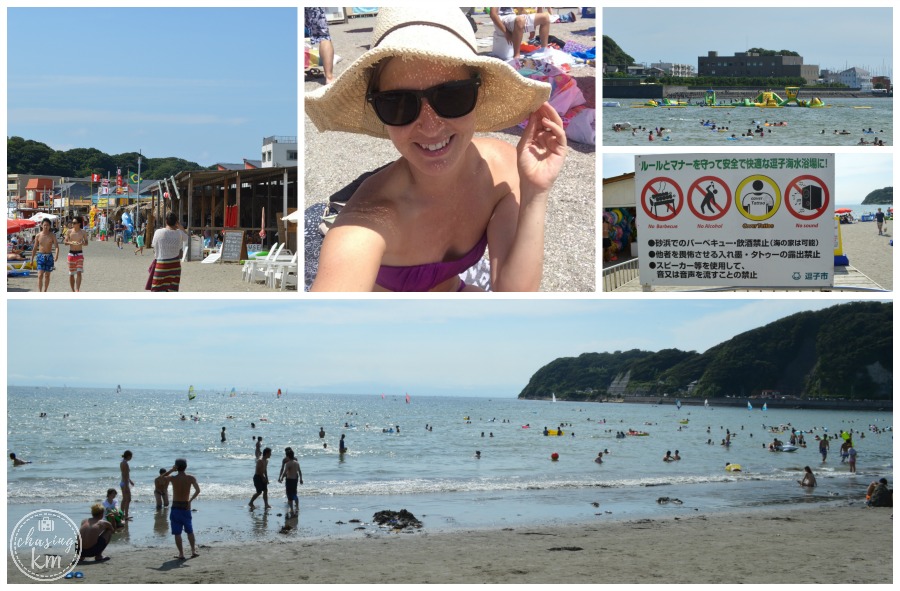 After 4 days in the city, and walking almost 20km a day, I was ready to say goodbye to Tokyo and meet up with Mark in Osaka for our trip to Okinawa… I definitely realised that I am more of a beach babe than a city girl…that life just aint for me!