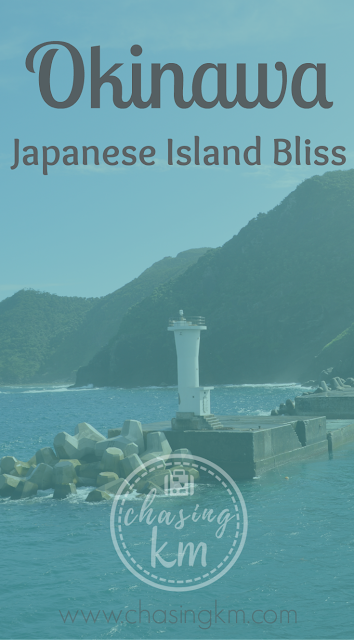 Summer vacations (or any vacation) to me means beach. Sun, sand, sea. So with our trip to Japan, I was concerned about where or how I was going to get my beach time in. In our past school vacations from Korea, we have traveled to Indonesia and the Philippines. So Japan is not exactly the place where beach party pops to mind, but rather temples, shrines, sushi and kimonos! But don’t forget about the thousands of outlying islands! Okinawa is a well-know island just a short flight away. One Google image search had me sold. I booked flights out of Osaka for Mark and I and got to sorting out our visas. To our surprise and excitement, our visa fee was wavered because we were visiting Okinawa. For us South Africans this was a small victory! On collection of our passports, the staff at the embassy pointed out to us that the remarks section in our visa had “Okinawa” written on it so now we had to go! After some research online I discovered that due to both natural and nuclear disasters, some areas and islands in Japan allow you a free visa to promote tourism in those areas.
So after my few days in Tokyo, Mark and I met up in Osaka where we hopped on a plane to Okinawa – an island a few hundred km south of mainland Japan. We spent one night in Naha (the main city in which the airport and Tomari ferry terminal is located), sampling the delicious taco rice that Okinawa is known for, as well as Okinawan Soba and Orion beer, produced on the island. We stumbled upon this little “restaurant” with the oldest man I’ve ever seen who poured our beers (really slowly) and actually prepared our food himself. I eagerly tried to snap a pic of him but I think he is a bit shy!! 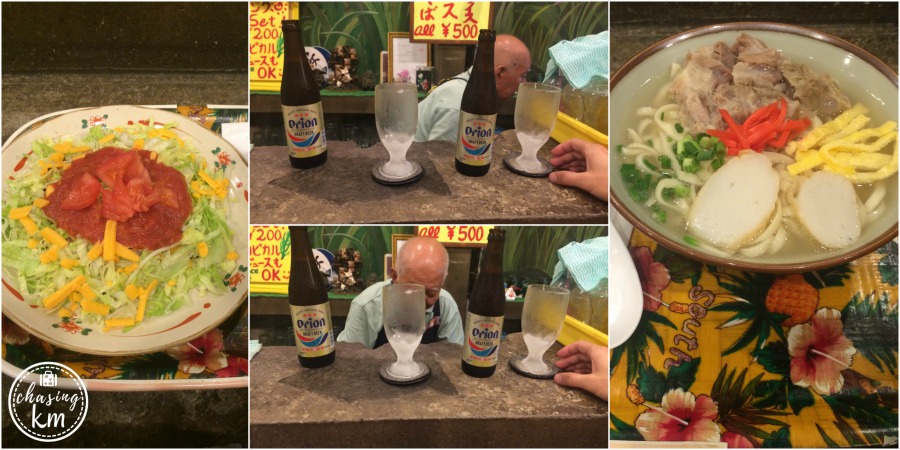 After that we headed for some drinks in the downtown area around Kokusai Dori (Street). We sampled some local craft beers from Helios Pub, which were very good but pricey. Later on we ended up at a strange little bar, Bar Rehab, where we got a history lesson on Okinawa and the US occupation of it during the war from a “local”. He was actually Canadian and married to a lady from Okinawa and had been living there for many years.
We ummed and ahhed about taking a day trip out to a smaller island- Zamami as it was scheduled to rain. We decided that we probably wouldn’t be back in Japan any time soon so we should just do it! So off we went to Zamami Island….well that’s the island we had planned to go to and researched, but it turns out we bought tickets for the wrong ferry and ended up at another island,  Tokashiki, which was just as beautiful (and closer so less time on the ferry). We took the smaller, fast ferry – the Marine Liner (2490Y) so it got us there in about 35 minutes. There was a minibus waiting at the port where we had to pay 500Y for a 10 minute ride to the beach on the other end of the island. On the way back to Okinawa we took the slower ferry as the fast ferry was cancelled due to bad weather. That was a bit cheaper (1660Y) and a bit slower too. 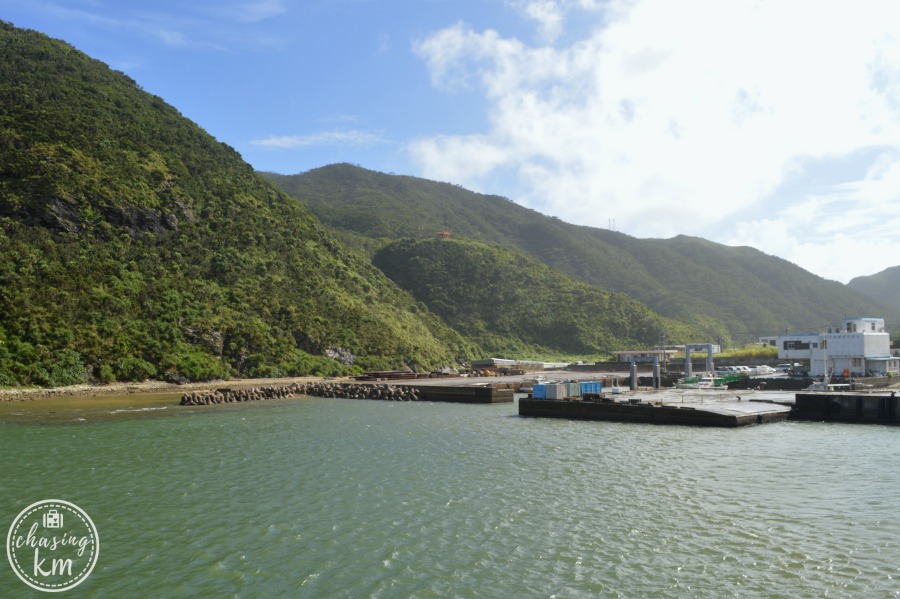 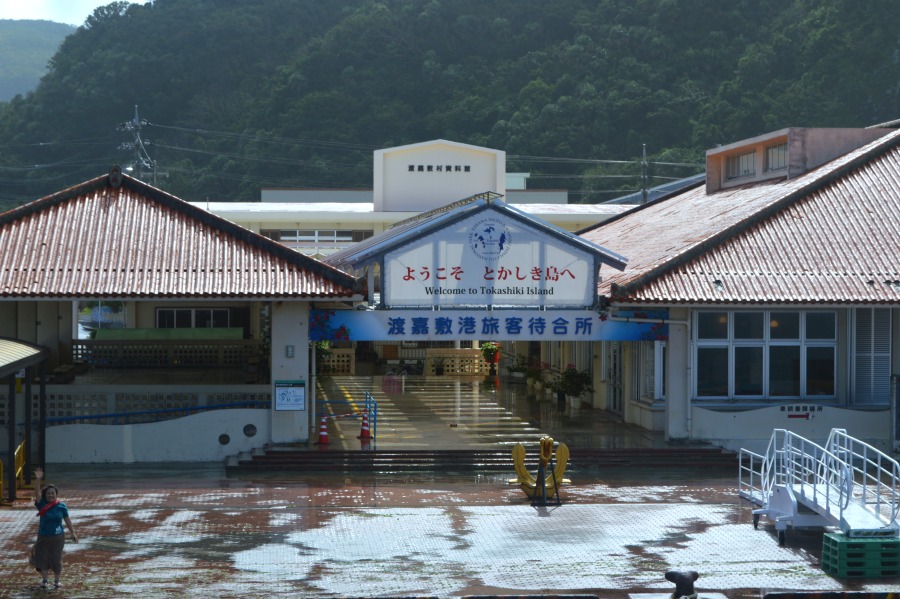 Aharen Beach was magnificent, with beautiful sunshine and azure waters and we totally high-fived each other for our good decision making skills! We quickly hired an umbrella and bought some beers, before diving into the beautiful water. The wind picked up a little, and it wasn’t long before the clouds rolled in and the rain plummeted down, soaking right through our umbrella, bags, towels and even diluting my beer!! We ran for cover into the ocean (the rain drops were so big and hard on my shoulders). Luckily these tropical rain storms only last a few minutes, and it wasn’t long before we were enjoying the sunshine and snorkeling in the crystal clear waters again. 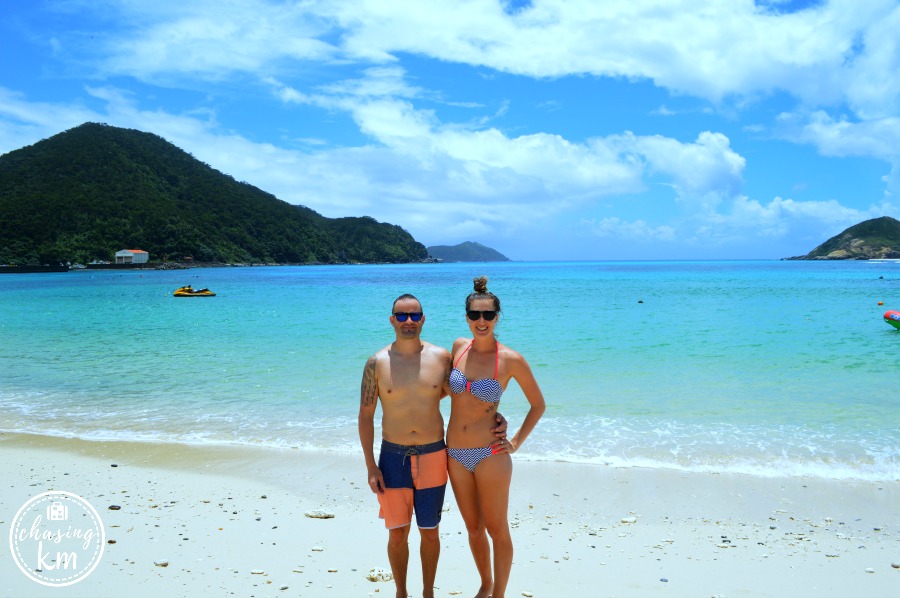 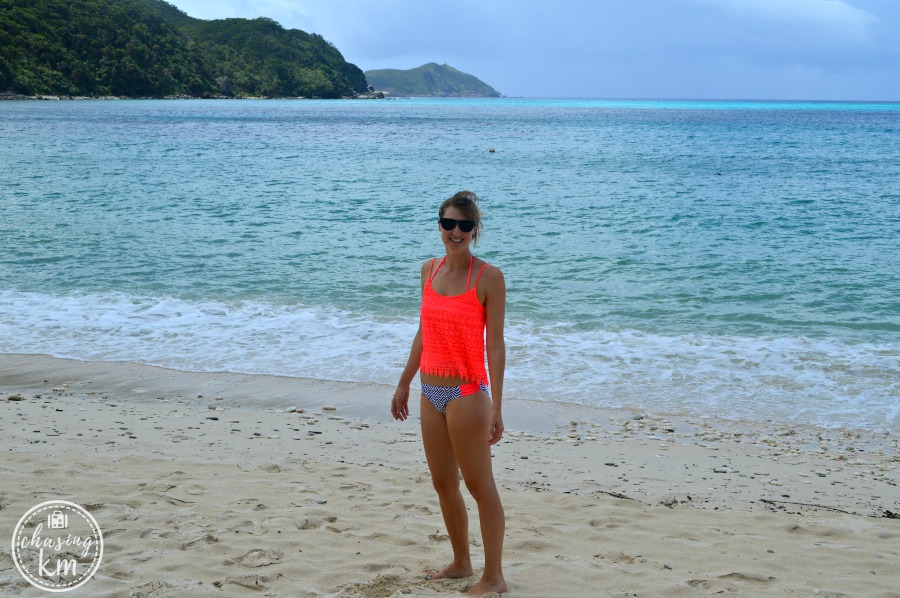 We spent 4 glorious days on Toguchi Beach, Yomitan. We basked in the sunshine, watched the magnificent afternoon storms, drank copious amounts of Japanese beer and ate sashimi everyday (sometimes twice)! We had such a great time here, and it was probably my favourite part of the trip. We woke up at our leisure daily, had a morning beach walk or swim, followed by some breakfast. Everyday before lunch we walked to the local store and bought fresh fillets of tuna and salmon. (This is definitely recommended as it is so cheap and so delicious!) We also made a concerted effort to try every different beer we could find in the supermarket, this was a hit and miss strategy. Our afternoons were spent snoozing on the couch (in the aircon – haha) and escaping the humidity, and then watching the gorgeous afternoon storms. Usually they cleared up within half an hour, where after we grabbed the kayaks or SUP’s (stand up paddle boards) and enjoyed our uninhibited access to the beautiful water. We were so lucky that our CouchSurfing host had such a sweet spot, and such a welcoming and friendly attitude! We felt like we were at home, and really had a real, relaxing and restful vacation! After our few days of bliss we packed up and took a taxi to the airport for our short flight to Osaka. We hoped the few days of rest would prepare us for some real “tourist-ing” in the heat of the Japanese summer during the last leg of our trip in Osaka. 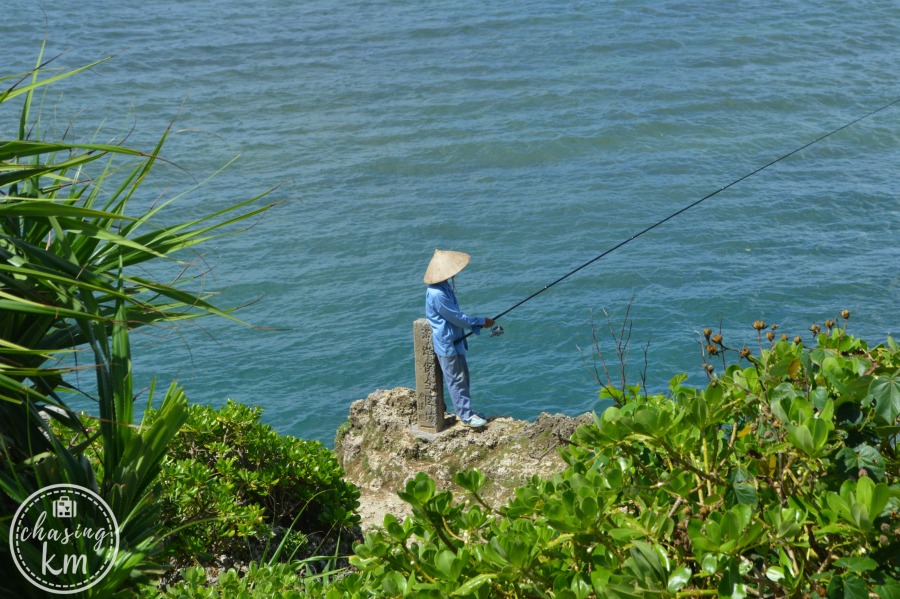 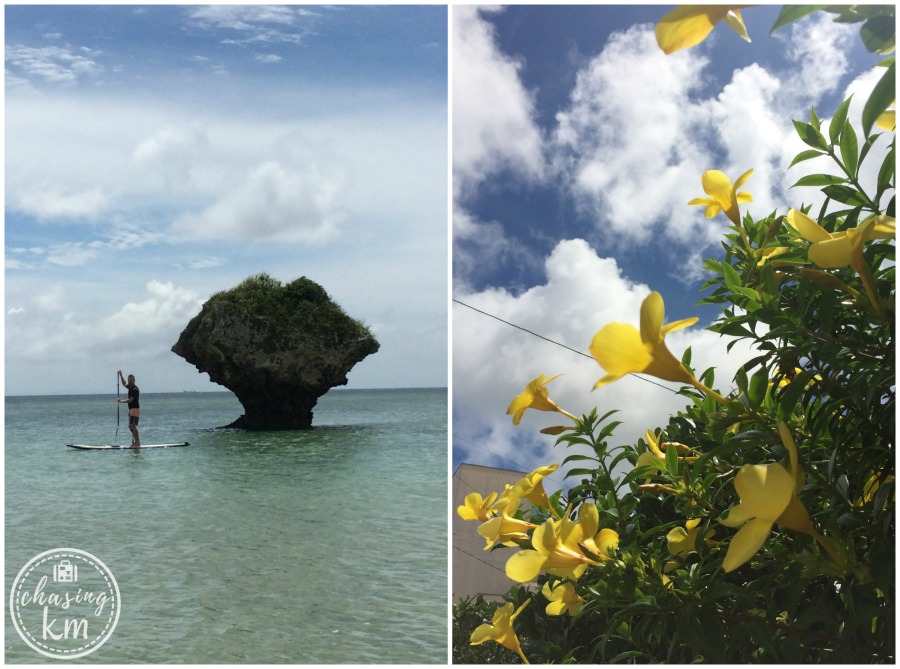 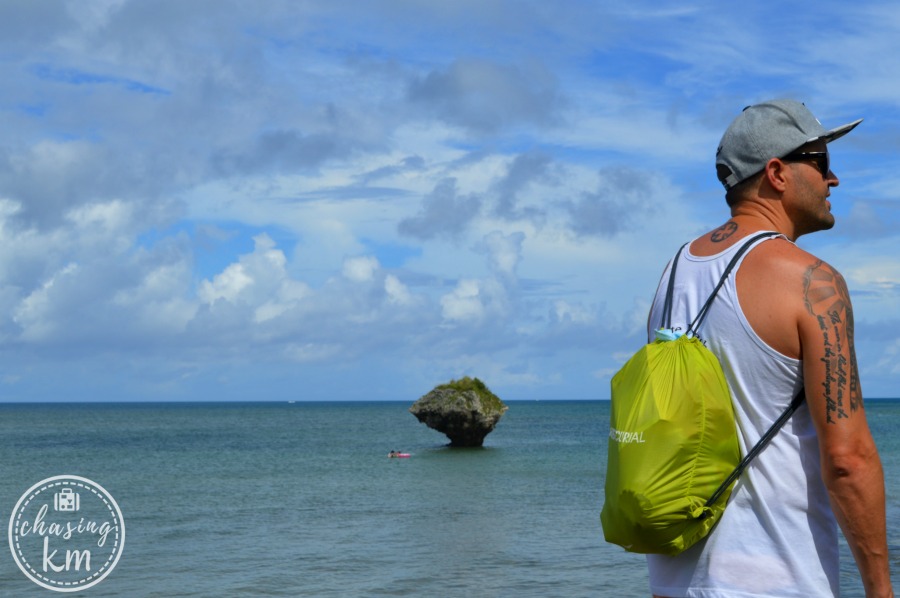 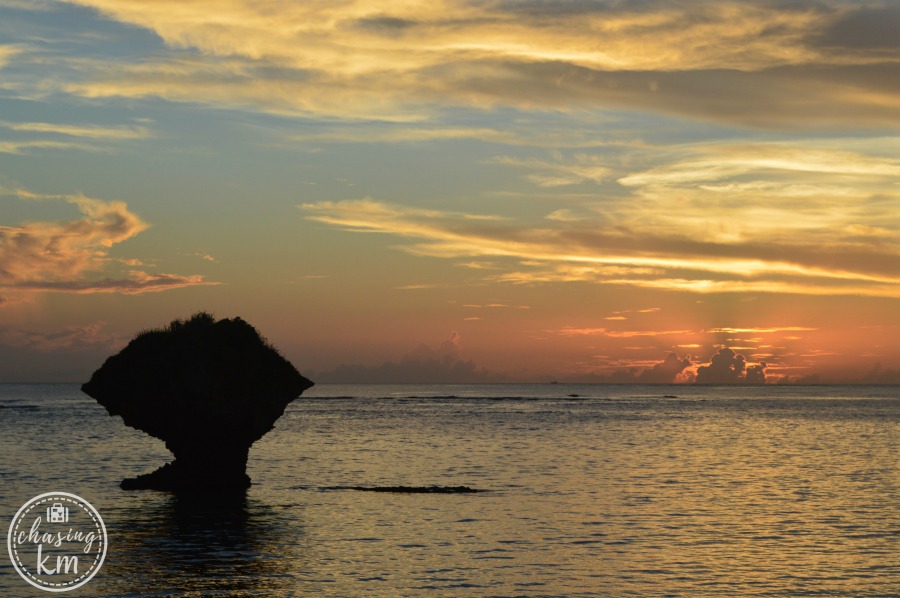 In Okinawa we had our first couch surfing experience. For those of you who don’t know, CouchSurfing is essentially a service/website where you can meet people who live where you are traveling. You can meet up with locals to sight-see or have a meal together, or they may have a couch or room available for you. In essence you have friends to stay with all over the world; you just haven’t met them yet (some paraphrasing going on there from their website)! It obviously takes some common sense and (very) careful consideration about who you feel comfortable meeting up or staying with. You are encouraged to fill in your profile and read references about your host or surfer. So after all this, we stayed with a guy from the US who is working in the military in Okinawa. He had this wonderful home right on the beach, kayaks, snorkeling gear and such an open mind and heart! He had two other people staying with him at the time, a guy from Israel who lives in Taiwan and a Chinese girl from America who teaches on mainland Japan. We all got on so well and just had the best time. Meeting other people from different countries is always so interesting (I ask way too many questions followed by many “wowwww”s). I guess it’s not for everyone (and I also realise that we might have landed with our bums in the butter in this one) but our stay in Okinawa left me with the best feeling in my heart! It was truly one of my greatest experiences.
Here’s a video of our (too short) time in Okinawa! My favourite part is our SUP adventures at the end!!!